Hydrogen system developer McPhy Energy SA (MCPHY: PA) recently reported impressive sales growth in the first half of 2019  –  23% higher than last year.    Sales were boosted by delivery of a refueling station in Houdain, France for a bus operation that is 100% powered by hydrogen.  New orders for projects in Germany, Bangladesh and Switzerland will keeps the company busy in the month ahead installing additional hydrogen fueling stations and electrolysis equipment for hydrogen production. 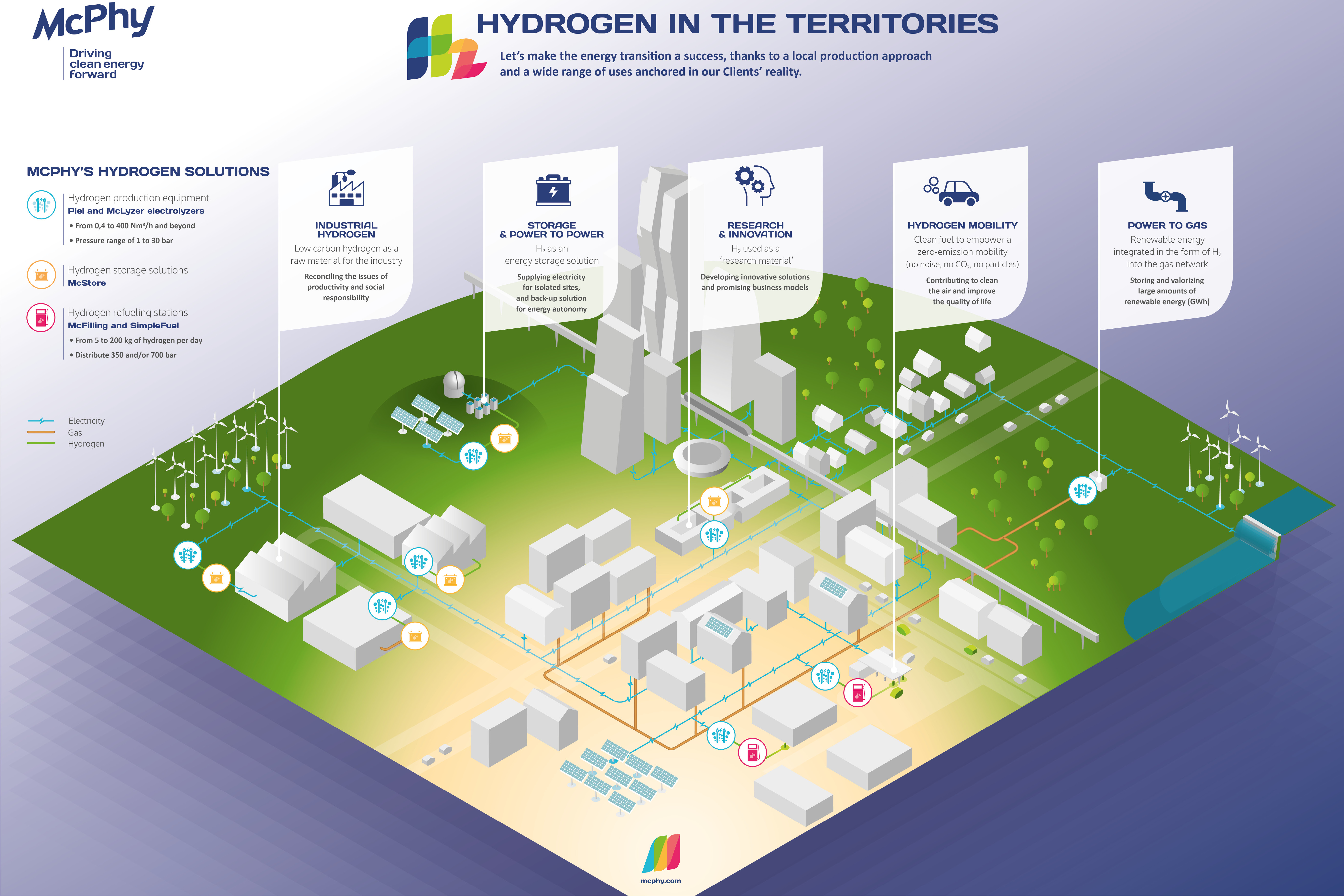 Despite the success, McPhy has not achieved profitability.  Thus the company remains dependent upon financing to support operations.  In 2017, the company secured an equity sales agreement with Kepler Cheuvreux that allows McPhy management discretion over the timing and amount of common stock sales.  The company recently sold 14.7 million shares for Euro $1.8 million (US$2.0 million).

Why are the Kepler Cheuvreux principals willing to hand out capital to a fledgling developer of hydrogen refueling stations?

Hydrogen is appealing in its simplicity  –  an element composed of one atom with one proton and one electron.  It contains a large amount of energy in its chemical bond that gives it value as an energy carrier.

Despite being the most plentiful element in the universe, hydrogen cannot be found on its own.  It is usually hiding out in combination with other elements to make some sort of compound.  Water is one example  –  two atoms of hydrogen linked together with one atom of oxygen.  Just like the name suggests, hydrocarbon is another hydrogen hangout.  For example, methane is one atom of carbon and four hydrogen atoms and propane is three of carbon and eight of hydrogen.

One way to get hydrogen out on its own is ‘reforming’ the compounds where hydrogen hides out.   Reforming is a high temperature process where steam reacts with a hydrocarbon fuel such as natural gas or gasified coal, knocking out the hydrogen atoms from the carbon.  Gasified biomass can be used as well, but nearly all hydrogen supplies today are produced from natural gas.

An alternative to reforming carbon-intensive natural gas, is electrolysis.  Water molecules are charged with an electric current that strips away the two hydrogen atoms from the oxygen.  Unlike many industrial processes that spew out toxic emissions, hydrogen electrolysis has one rather benign by-product  –  oxygen gas.

McPhy Energy makes hydrogen electrolyzers for industrial applications as well as for fuel cells that can power vehicles.  Fuel cells are like fancy batteries, producing electricity without combustion or emissions.  However, fuel cells do not need to be recharged.  As long as the fuel cell is supplied with hydrogen and oxygen it will generate electricity.

Fuel cell-powered cars have similar power and driving range as cars powered by combustion engines, but only water drips out of the tailpipe  –  no carbon emissions.  Indeed, vehicles powered with hydrogen fuel cells emit 50% less carbon dioxide if the hydrogen is made by reforming natural gas.  If the hydrogen comes from hydrogen made by renewable energy such as wind or solar power, the fuel cells have a 90% smaller carbon footprint.

One of the appeals of hydrogen fuel cell powered vehicles is that the refueling process is similar to filling up with gas.  Thus neither transportation infrastructure nor travel habits need be changed a great deal.  Car owners can still count on the pit stop for chips and soft drinks!  Travelers will need to buy super size treats as the fuel cell-powered car does not have to be refueled as often as the conventional combustion engine car.

This article was first published on the Small Cap Strategist weblog on 8/20/19 as “Super-size with Hydrogen”.