August 2019 saw economic warning signs flashing and a worsening trade war with China. Unsurprisingly, this led to weakness in most stock market indexes.

The strong performance of my portfolios probably rises from the falling interest rate environment we are in. As central banks begin to cut rates in an attempt to avert recession, investors are bidding up the prices of higher yielding securities. The small capitalization but high-yield clean energy stocks I favor are particular beneficiaries as investors find that larger capitalization, more mainstream companies and bonds no longer are producing enough income for their requirements.

While the search for yield seems to be allowing my stocks to ignore the weakening market trend, this feels like very late-cycle market action. I continue to see this as a good time to take profits, sell covered calls, and generally reduce overall market exposure.

Valuations of many of these stocks are feeling stretched, and if or when a bear market begins in earnest, it will be felt in all corners of the market. It’s been my experience during bear markets that even stocks which were relatively uncorrelated with the broad market when it was heading up tend to head down at the same time as everything else.

I’ve never been good at predicting the timing of bear markets; I’ve been far too early every time. But being too early is far better than too late. It may still be early, but taking profits, selling covered calls, and shifting to lower risk stocks are all actions that are much better to take too early than too late. 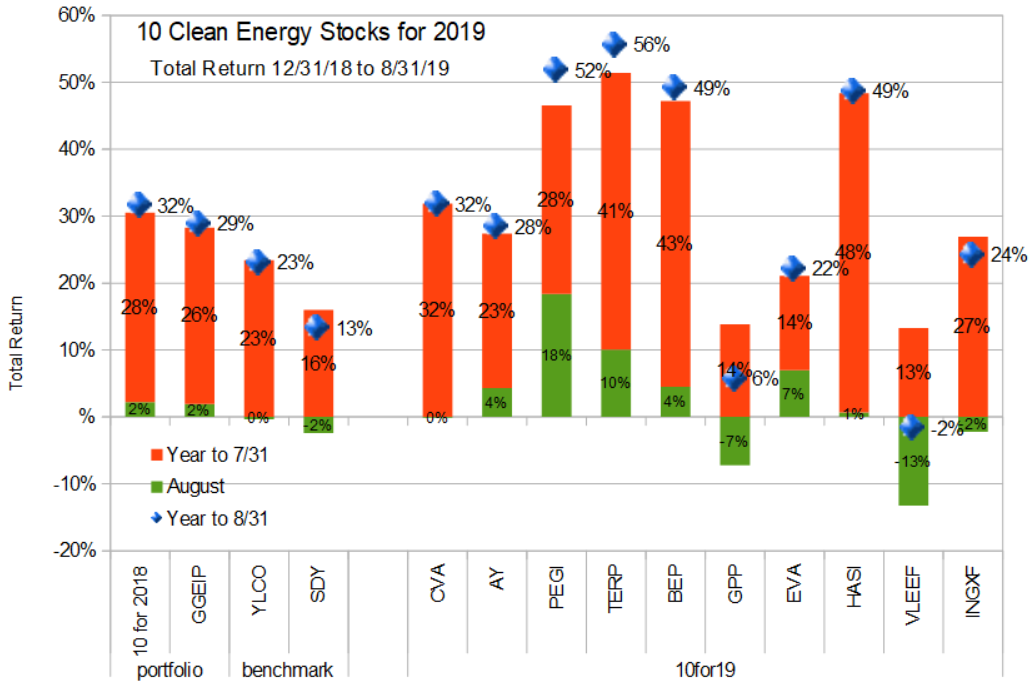 The biggest mover in August was Pattern Energy Group (PEGI). There were news reports of rumors that the company might be bought out. One rumored buyer is Brookfield Asset Management (BAM) which is said to have proposed merging PEGI with it’s 65% owned Yieldco Terraform Power (TERP).

BAM is currently the sponsor for both TERP and Brookfield Renewable Energy Partners (BEP). I included these two Yieldcos in my 10 Clean Energy Stocks model portfolio this year because I felt they were both slightly undervalued and I consider BAM to be an excellent sponsor in that it has nearly unparalleled access to capital markets, and its values its reputation as a reliable manager of infrastructure assets. That reputation is key, because the often opaque accounting and complex corporate structures of Yieldcos allow unscrupulous Yieldco sponsors plenty of opportunities to present an overly rosy picture of a Yieldco’s cash flow and growth prospects. If BAM were to attempt to mislead investors about the prospects of its Yieldcos, the damage to its reputation when it was eventually found out would far outweigh the short term gains from temporarily inflated Yieldco stock prices.

While I have no reason to distrust PEGI’s private sponsor, Pattern Development Group, it has nothing like Brookfield Asset Management’s sterling reputation or access to capital. This is one reason PEGI has been trading at a discount to other Yieldcos, and I included it in the 10 Clean Energy Stocks model portfolio because it was the most undervalued Yieldco. Although both PEGI and TERP have returned over 50% since the start of the year, TERP still trades at a premium to PEGI, and we could expect PEGI shares to gain another 10% to 15% in such a merger.

The benefit for TERP would be increased scale, which could potentially lower its cost of capital. There could also be some synergies from reducing redundant management. I’m not sure if these benefits are compelling enough to tempt BAM to go through with such a deal. In my experience, Brookfield prefers to buy companies in distress, at a significant discount to their net asset value. At $27, I’d call PEGI fairly valued, so investors should be cautious about banking on a merger going forward. Terraform Power was a much smaller and more troubled company when Brookfield bought it in 2017, but it pays to remember that that purchase took place at about $13 a share.

Donald Trump likes pleasing his oil industry donors. Sometimes that is at odds with pleasing his farm state supporters. The Trump EPA’s actions with “hardship” refinery waivers which are delivering profits to selected oil refinery owners at the cost of undercutting the ethanol market (and hence the market for corn) are sending a clear signal that his first loyalty is to his donors. His trade war with China isn’t helping his farm state voters, either.

Trump is still promising an announcement of some action that will greatly help the biofuel industry. But previous promises have amounted to nothing. With farm state voters getting restless, perhaps this time will be different. But until there is decisive action from the Trump administration or a new president in the White House, the ethanol industry is likely to remain a very difficult place to do business. Hoping for decisive action from the Trump administration does not strike me as a wise investment strategy.

Ethanol production and transportation MLP Green Plains Partners (GPP) has not escaped unscathed. It has agreements with its sponsor, Green Plains (GPRE) that guarantee minimum income, but ethanol industry conditions are also hurting GPRE, which has reacted to weak ethanol markets by diversifying away from the ethanol business.

The question GPP investors need to ask themselves is, “Will GPRE continue to honor its commitments to GPP?” I believe the answer will be “yes.” If I am right, then the current 14% yield from GPP is quite attractive, and if/when GPRE regains a more stable financial footing from a recovered ethanol market or by successful diversification, GPP investors will see significant capital gains as the partnership’s valuation returns to non-distressed levels.

Late 2019 remains a time for stock market investors to be cautious. Investors in the 10 Clean Energy Stocks Model Portfolio should be taking some of their handsome gains and holding them in cash as they wait for better valuations.

Of the stocks in the list, only Green Plains Partners seems attractive at this point. GPP is already cheap because of troubles in the ethanol market. Since these troubles are political in nature, a worsening overall economy could as easily help (if it spurs political action) as it could hurt. Cash also seems quite attractive right now.