In hand we now have the latest earnings reports from what you might call the 8 Pathfinders – eight publicly traded stocks whose second quarter results offer insights into the health and performance of the advanced bioeconomy as 2019 heads towards its closing crescendos.

Our 8 Pathfinders – In the world of global renewable diesel at scale, Neste (Neste.HE); pure-play enzymes, Novozymes (NVMB); In pharma and synbio, Codexis (CDXS); as a hybrid play in advanced fuels, Aemetis (AMTX); in advanced marine and jet fuels, Gevo (GEVO); for biodiesel and hydrocarbons, Renewable Energy Group (REGI); in advanced began foods, Beyond Meat (BYND), and for a diversified ethanol and nutrition play, Green Plains (GPRE). 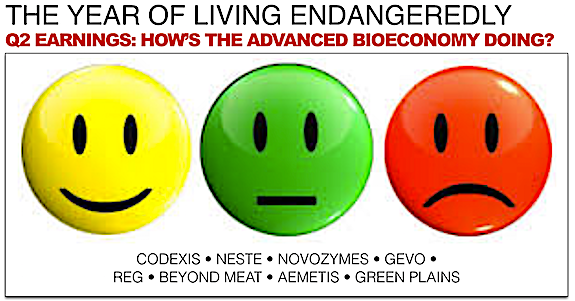 As CEO Peter Vanacker, noted: “Neste’s solid financial performance continued. We posted a comparable operating profit of EUR 367 million in the second quarter, compared to EUR 277 million in the corresponding period last year. Renewable Products’ quarterly sales and production volumes were the highest ever. The renewable diesel market continued to be favorable, but feedstock prices increased as communicated earlier. Our sales volumes were 745,000 tons, and this new quarterly record was also supported by the excellent operational performance at the refineries. The higher sales volume had a positive impact of EUR 79 million on the comparable operating profit year-on-year. The comparable sales margin averaged at USD 568/ton, which was 12% higher compared to the corresponding period last year, leading to a positive impact of EUR 32 million on the operating profit. During the second quarter 65% of volumes were sold to the European markets and 35% to North America. During the quarter our renewable diesel production facilities operated at a very high average utilization rate of 105%, based on the nominal capacity of 2.9 Mton/a. The share of waste and residues was 77% of the total renewable raw material inputs.”

Outlook: Developments in the global economy have been reflected in the renewable fuel, feedstock and oil markets; and volatility in these markets is anticipated to continue. Vegetable oil price differentials are expected to vary, depending on crop outlooks, weather phenomena, and variations in demand for different feedstocks. Global oil product demand growth is expected to continue at a lower rate than in 2018, while global refining capacity additions are expected to grow driven by large projects in Asia and the Middle East. Based on our current estimates and a hedging rate of approx. 80%, Neste’s effective EUR/USD rate is expected to be within a range 1.14-1.16 in the third quarter of 2019.

CEO Peder Holk Nielsen said, ““Our half-year sales performance is not satisfactory, but as expected, following the revised full-year outlook on June 6. Softness in US agriculture and some emerging markets, including the Middle East, has created headwinds. We’re confident sales growth will accelerate in the second half of the year as the Freshness platform, BioAg and Bioenergy all step up, and the Middle East comparison eases.”

As CEO John Nicols noted: “Product revenue increased a very solid 68% over the prior-year period with strong contributions from Merck, Urovant Sciences and four additional global Top 25 pharmaceutical customers. R&D revenue was spread across an increasingly wider base of customers including Nestlé Health Science, four global Top 25 pharmaceutical customers, and two new customers in two new verticals. We also secured a dedicated R&D project team working with another new global customer targeting an entirely different molecular diagnostics application class for Codexis. Additionally, we are delighted with Casdin Capital’s $50 million investment in Codexis, as announced in June. We appreciate their confidence and their recognition of the versatility of our CodeEvolver platform technology.

Aemetis’ reported in Q2 $11.1 million of revenue from India operations during the second quarter of 2019, representing a 106% increase from the prior year quarter.  Aemetis said it continues to advance its ultra-low carbon California cellulosic ethanol biorefinery, which is expected, upon completion, to add approximately $80 million of high margin revenues. Utilizing thousands of tons of waste wood from California’s Central Valley, the Aemetis cellulosic ethanol biorefinery is expected to produce the state’s lowest carbon ethanol fuel and reduce greenhouse gas emissions in the process.

Gevo reported $5.1M in quarterly revenue, a $4.7M EBITDA loss and ended the quarter with cash and cash equivalents of $29.2 million. The company entered into an agreement with Air TOTAL for Gevo to supply its sustainable aviation fuel to Air TOTAL for use and distribution in France and other parts of Europe.  With the finalization of this new supply contract, Gevo will initially supply Air TOTAL SAF from the South Hampton facility in Silsbee, Texas and eventually from the expansion of Gevo’s advanced biofuels production facility in Luverne, Minnesota plant which is expected to be constructed in the next several years. Gevo also reported successful completion of the Port of Seattle renewables trial, and a trial with Virgin Australia.

CEO Pat Gruber noted “the pieces necessary to drive Gevo’s business are falling into place.  We believe we are making real progress on refinancing our secured debt, securing offtake agreements for our advanced renewable biofuel products and advancing manure biogas and wind projects to decarbonize our Luverne Facility.  Evidence of our progress include the supply agreement with Air TOTAL.  In addition, we are working on securing a loan for up to $45 million that could be used, in part, to pay off our current secured lender.

CEO C.J. Warner noted:  “The challenging margin environment continued in the second quarter as a result of uncertainty around both the BTC and small refinery exemptions. Within this context, our underlying performance was strong with a 15.0% increase in gallons sold and a 2.0% increase in gallons produced. We continue to believe that the BTC will be reinstated, which will reward our strong operational performance. On the non-operating front, we are pleased that we finalized the sale of our Life Sciences business and paid off our 2019 convertible notes without financing, primarily from cash on hand.”

The Company estimates that if the currently lapsed BTC is retroactively reinstated for 2019 and 2018 on the same terms as in 2017, REG’s Adjusted EBITDA would increase by approximately $81.0 million for the quarter.

CEO Ethan Brown said, “We are very pleased with our second quarter results which reflect continued strength across our business as evidenced by new foodservice partnerships, expanded distribution in domestic retail channels, and accelerating expansion in our international markets. We believe our positive momentum continues to demonstrate mainstream consumers’ growing desire for plant-based meat products both domestically and abroad,”

Brown said that Q2 growth was driven by an increase in sales volumes of products in the fresh platform across both retail and restaurant and foodservice channels, driven by expansion in the number of retail and foodservice points of distribution, including new strategic customers, international customers, and greater demand from existing customers.

CEO Todd Becker noted, ““We continued to face a challenging ethanol margin environment compounded by a reduced run rate early in the quarter as we emerged from a first quarter production slowdown that impacted our financial performance,” commented Todd Becker, president and chief executive officer. “We believe that maintaining a strong balance sheet while continuing to reduce operating expenses through our Project 24 initiative, should give us the financial stability to withstand any elongated margin weakness the industry may face.”

“While our company and industry have been hit hard by government policy, geopolitics and oversupply, we are not waiting for the recovery to happen. We will continue to transition this platform to high protein animal feed production as a growing driver of more predictable and stable earnings, beginning with the completion of our high protein project in Shenandoah, Iowa in late 2019.”

Becker confirmed an LOI to sell a minimum of 50% of its cattle subsidiary for $75M. He also said that Project 24 remains on course “in lowering our operating expenses to an estimated 24 cents per gallon across our ethanol platform.

Looking at the Sector

So there we have it, choppy waters. Fast growth at Beyond Meat, confidence and strong growth in renewable diesel crisis in first gen US ethanol and biodiesel, lackluster growth in enzymes, particularly in agriculture. Synbio product revenues continue to be small but fast-growing, as we see at Codexis; Indian biodiesel finally performing as long expected, but slow development within Aemetis’ cellulosic ambitions. Gevo continues to zig and zag in search of the capital to realize its ambitions in marine and jet, with significant offtakers showing increased interest in the platform.

The bottom line, the more advanced the technology (Beyond, Neste, Codexis), the better the results for this quarter. For a number of years there has been a real increase in the dependence of the industry on its more established companies and sectors, such as first-gen ethanol, biodiesel, and conventional protein. The pendulum has been singing towards “advances via advanced” and it will be interesting to see how the second half of the year shapes up.

For sure, the Trump Administration is just killing farmers, advanced manufacturing and domestic renewable fuels. EPA has been a thorn in the industry’s side ever since the agency was handed responsibility for administering the Renewable Fuel Standard, but never more so than now. The distress is real, though companies that saw the headwinds are doing better than others. As Green Plains’ Todd Becker observed, “we are not waiting for the recovery to happen.”

Transition is in the air — it is a Year of Living Endangeredly.