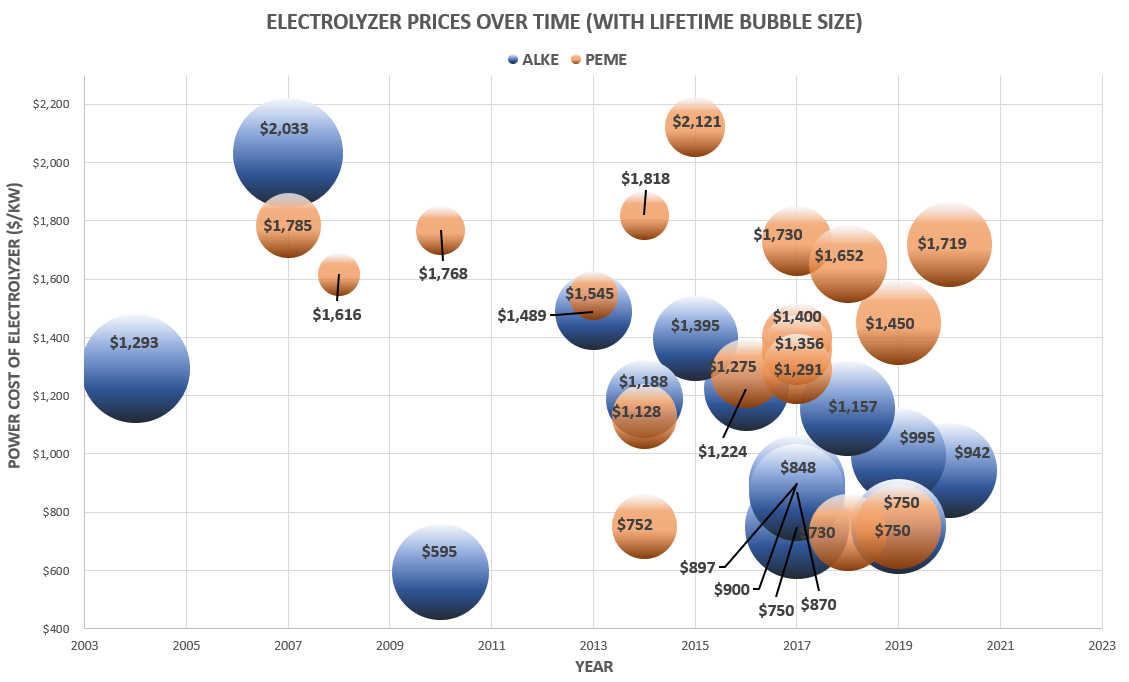 The graph above shows the investment costs ($/kW) of ALKEs and PEMEs as the technology has advanced over time. In other words, they show the initial capital cost for every 1 kW of electrolyzer capacity. The bubble size represents the total operational lifetime in hours of the technology, which is an indicator of its durability. The costs are mostly for ‘stacks’ – bundles of electrolyzers with higher capacity – rather than individual units. This article will discuss the figures for ALKEs.

One reason behind the wider commercialization of ALKEs even today is their edge in pricing. As seen in the graph, ALKEs cost lower than PEMEs on average by almost 20-50% as per data collected. This is largely because ALKEs require cheaper materials and processes in their construction. PEMEs rely on costly precious metals like iridium, platinum and titanium as catalysts and electrodes, and it is expensive to assemble these components as well as the central electrolyte.

ALKEs also possess other beneficial qualities over PEMEs. They are mature technologies that have already been through multiple phases of optimization and cost reduction, while PEMEs still contend with fundamental developmental problems. Integral components of ALKEs like the electrodes and electrolytes can be effectively made with abundant materials such as nickel, stainless steel or potassium hydroxide. This not only makes ALKEs cheaper, but also enables them to avoid future supply bottlenecks that potentially await PEMEs. Their durability far surpasses PEMEs too, as is evident from the graph, and they are also more resilient to impurities.

Like with PEMEs, the costs of ALKE systems can be divided in two – the cost of the stack, and the Balance of Plant (BOP) which is the cost of all auxiliary systems and components. As per a report by the International Renewable Energy Agency (IRENA), for an average 1 MW stack, the stack costs are 45% and the BOP is 55% of the total system cost.

Manufacturing the electrodes and central electrolyzer membrane (diaphragm) constitutes ~42% of stack costs, or about a fifth of the overall system cost. While the materials for these components are relatively cheap, their construction often employs expensive methods. State-of-the-art Raney Nickel electrodes, or polybenzimidazole (PBI) membranes for the diaphragm, require complex processes to manufacture which reflects in the final ALKE price. This is noticeably different from PEMEs, where costly metals were the biggest component of stack costs.

Within BOP, power costs occupy the largest share at about 50% (or ~28% of system costs). Similar to PEMEs, the electricity supplied to the electrolyzer heavily influences not only the system cost, but also the final price of the hydrogen produced. Consequently, system prices for ALKEs can differ greatly depending on region. Other influencers of BOP include inbuilt water circulation systems (22%) and hydrogen processing such as compression and drying (20%).

Current research on ALKEs mainly concentrates on electrode and diaphragm design, since the same electrode chemistries have been utilized amongst commercial variants for decades. Redesigning these components may help cut manufacturing costs, while also making systems more compact. The IRENA report envisioned emulating innovations in PEMEs, such as combining electrodes, diaphragms and other layers.

Some other focus areas include increasing current density and reducing resistance within the cell, and increasing the active surface area of the catalyst. ALKEs do not respond as well to power supply fluctuations as PEMEs, and commercial Raney Nickel catalysts lose effectiveness under such intermittent operating conditions. This is an advantage of PEMEs as it makes them more compatible with variable renewable energy (RE), so research is on to bring ALKEs up to par.

The need for scaling up

Increased scales of production can bring vital economic gains for ALKEs, by helping slash manufacturing and BOP costs substantially. A study by the National Renewable Energy Laboratory (NREL) in 2014 estimated the effects of increasing the annual production of 1 MW ALKE modules. Going from 10 to 1000 units per year saw the cost of Raney Nickel electrodes fall by 50-80%, PBI membranes by 50% and overall stack costs by nearly 60%. A 1000, 1 MW units translate into 1 GW of electrolyzer capacity produced a year – an achievable goal with Nel Hydrogen (D7G.F, NLLSF, NLLSY) and McPhy (MCPHY.PA) already announcing ALKE ‘gigafactories’ in Norway and France respectively.

Larger stack ‘sizes’ (capacities) can also cause price reductions. As per the previously mentioned IRENA report, increasing individual stack sizes from 1 MW to about 10-15 MW can bring down investment costs by nearly 45%. For reference, the largest ALKEs commercially available today are about 20 MW. Investment costs level off roughly beyond the 15 MW point, implying that focusing on even larger stacks than now might be futile. Instead, modular designs might be favorable, wherein larger capacities are achieved by stringing together smaller units.

With regards to durability, ALKEs have system lifetimes of about 60000-100000 hours as per data collected. On average, this is about 30000 hours – or 10-15 years – greater than PEME lifetimes. This significant gap is due to the absence of several factors that damage PEME components, such as acidic internal environments, high current densities and the formation of corrosive gases. ALKEs also undergo their own deprecatory processes over time – dissolution of the catalysts, mechanical degradation and the creation of nickel impurities.

Certain changes that increase the efficiency or decrease the costs of ALKEs can end up reducing their durability, such as thinning the diaphragm or high-pressure operation. This is an important trade-off – technical innovation can both add and subtract from their operational lifetime. ALKE durability could witness slow growth or even reduce, shrinking their lead over PEMEs on this metric.

The multinational advisory body Hydrogen Council has estimated that hydrogen prices would have to reach about $0.5-2/kg to compete with fossil fuels. For this to feasibly occur, investment costs for electrolyzers would have to reach well under $200/kW. ALKEs already have a head-start in the journey towards this goal, and deserve the attention of industry and policy-makers.

For ALKEs to retain their dominant position in the electrolyzer market, their path forward should be twofold – increased production to slash prices of core components, and technical advancements focused on achieving parity with emerging technologies. ALKE manufacturers must strive towards minimizing internal electrical resistance, increasing power-supply responsiveness and current densities, and engineering compact designs. This will allow them to rival the efficiency and renewable compatibility of newer electrolyzers like PEMEs and solid oxide electrolytic cells (SOECs). However, ALKEs must also carefully navigate the trade-off between these improvements and system lifetime, to hold on to their durability advantage.

As with PEMEs, government assistance may help in the immediate term to ensure that electrolyzer supply and demand experience parallel growth. For instance, firms producing and deploying ALKEs could receive subsidies or other incentives. Investments could be made into direct application areas like refueling stations for hydrogen automobiles, supporting infrastructure like distribution pipelines or complementary industries like fuel cells. Appropriate legislation to ensure that industries like fertilizers or steel transition to green hydrogen could induce overall sectoral growth in electrolyzers.

Since the cost of hydrogen produced by ALKEs is also highly dependent on power prices, low-cost renewable electricity is imperative to achieve hydrogen pricing targets. This is especially important for hydrogen-intensive industries, so that electrolyzers become competitive sources for their raw materials. This will occur as the adoption of renewables grows and technologies like photovoltaic cells become cheaper. More renewables can also potentially directly create more electrolyzer demand for supply-smoothening or energy-storage.

In the short-term, with adequate support, price and durability advantages may carry ALKEs forward. But their long-term survival relies on shedding archaic technologies and producing lower-cost, higher-performance variants in much larger quantities.

Ishaan Goel is a high school senior from Mumbai, India and an incoming freshman at the University of Chicago. He likes applied mathematics and statistics, especially in relation to economics and finance. He is very interested in green energy and sustainable technologies, because of their potential and increasing relevance for the future. Ishaan’s hobbies include writing, long-distance running, playing the keyboard and coding.