REG has been making good progress with Wall Street under interim CEO Randy Howard and its share price has been on the rise, and the plants have been humming along nicely churning out hundreds of millions of gallons of biodiesel and the liquid gold also known as CARB diesel (or renewable diesel qualified for the low-carbon markets in California, Oregon and British Columbia). All that, built on an incredible run from single-plant operator to biodiesel behemoth under, first, Jeff Stroburg and then Dan Oh.

Now, the next chapter begins to unfold.

It’s a brilliantly operated company that generated some $220 million in net income last year. Yet, the company has a P/E ratio of around 4.4 compared to the NASDAQ average that hovers around 25. If the company were valued along with its NASDAQ peers, it would have a $5B market cap and could be using its stock to roll up a huge amount of production capacity through M&A. And there’s not an REGI investor who wouldn’t like to see a juicy $130 stock price.

The few cases in history where you get these kind of market disconnects are when the balance sheet is a toxic waste dump, the products are shortly destined for the scrap-heap of history or there’s a huge potential lawsuit liability. None of those apply in this case. So, there’s been major progress, but there’s huge upside. And, so long as the company remains this undervalued, it makes REG a ripe target for acquisition, raiders, privatization efforts, or activist shareholders.

What’s going to happen to REG? Let’s look at the two fundamentals that restless investors are pointing us too: feedstock cost and the dependence on tax credits and RINs to generate value.

The world of REG’s prices and values

Here’s a graphic from Iowa’s Center for Agricultural (CARD) to illustrate biodiesel’s fundamentals. 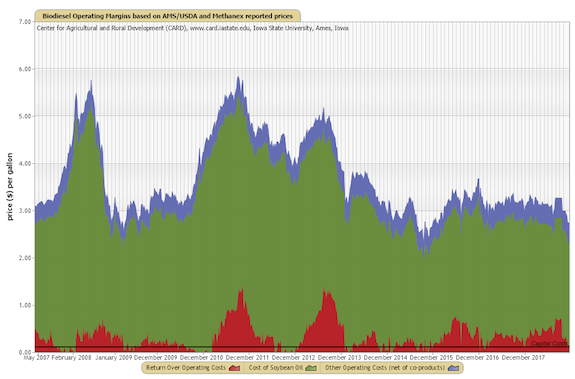 The red marks the operating margins and the green represents feedstock costs — the one, minuscule, the other daunting. What need to be done to unlock REG’s value? It really comes down to restructuring REG’s income stream. Investors see the company as entirely too dependent on those tax credits and RINs.

There’s come evidence for their fear. Congress only passed the 2017 tax credit in early 2018, did not renew the credit for 2018 at all, as of yet, and the 2015-16 credits came in well into 2015. Only one year, 2016, has REG entered into a new year with a tax credit assured.  The Brady bill dropped into Congress last week with a thud, offering a 7-year tax credit extension but discounting and sunsetting the credit in the mid 2020s.

And, in case you were still feeling swimmingly happy about your REG share price outlook, the Trump Administration’s negotiations with the renewable fuel industry on sweeteners and support have mostly focused on year-round availability for E15 ethanol and not on expanding the market for biodiesel, much. The current EPA mandate for 2019 is way below the industry’s production capacity.  Which means that biodiesel gets hit on the nose by the way EPA runs the RFS program, but the relief efforts generally target ethanol, instead of America’s favorite advanced biofuel. Here’s some color on RIN values (with biomass-based diesel in blue):

That’s hardly grist for shareholder enthusiasm and its tough on REG-s long-term investments planning, too. Can’t be positive for company morale, either.

Warner, as the incoming CEO, will have several options. One, more of the same, hammer on Washington to extend tax credits and protect RIN values. Two, acquire or build production capacity in renewable diesel to take advantage of the sweet margins for that fuel, taking advantage of REG’s strong position in fats, oils and greases (FOG) acquisition. Three, transform feedstock costs by tapping into wood residues and MSW to make biocrude that can be upgraded to renewable diesel. Four, find a way to privatize the risk that flows from government hemming-and-hawing over tax credits, taking REGI out of the firing line when tax credits do not appear. Five, deliver on the promise of REG Life Sciences with a product line or two that generates the kind of company-altering cash flow that’s been helping the likes of Amyris of late. There may be others in the REG option quiver, but you get the general idea.

“After completing a thorough and deliberate succession planning process, we are pleased to welcome CJ Warner as our new President and CEO,” said Jeff Stroburg, Chairman of the REG Board of Directors. “Her background and success, coupled with her passion for developing renewable fuels that transform the transportation fuels market to a cleaner and sustainable future, makes her an exceptional choice to lead REG.”

“I am delighted and honored to be joining the REG team as President and CEO,” said Warner. “This growing company is well positioned to meet the rising global demand for cleaner, competitive low carbon fuel solutions.  I look forward to the exciting future ahead and to leading the team with a continued focus on value creation.”

During the leadership transition Randy Howard will remain engaged with the business.  Upon completion of the transition, Randy will continue to serve on the REG Board of Directors, a position he has held since February 2007.

Natives are restless, which is to say shareholders. Being an incredibly well-operated company in a fast-growing space is not as attractive to them as it should be, but it’s tough to fire investors. And the company is operating too strongly to hope that anyone can work a miracle from the inside by simply boosting productivity.  There’s not much upside left in performance, but there’s upside in REG Life Sciences, feedstock and restructuring policy risk. None of which is easy to do — but anyone who’s been around CJ as part of the “Beyond Petroleum” generation that advanced at BP under Lord Brown, or her subsequent years bringing Sapphire Energy from a great idea to an at-scale reality, or her work taking Tesoro (or Andeavor, take your pick) into the world if renewable with relationships with Fulcrum, Ensyn (ESNC) and the acquisition of Virent, will be of great cheer. She’s a winner.

And, we might see in her strategic work at Tesoro that renewable diesel might well be the most potent option in front of REG to boost margins, add capacity and dominate the California market where policy risk is lower. The key ultimately is feedstock. The world is reaching Peak FPOG far faster than Peak Oil.