In late August 2018, sustainable ingredients developer Amyris (AMRS:  Nasdaq) staged a successful secondary offering by a selling stockholders, Foris Ventures and Vivo Capital Fund.  In conjunction with the offering the company raised $46.0 million in new capital through the exercise of warrants held by existing shareholders.  Last week the shares closed over 40% higher than the $6.25 deal price.  The chief executive officer lauded shareholders for their support and apparent endorsement of the company’s game plan to commercialize sustainable alternatives to petroleum-sourced materials used in fragrance, health and beauty products. 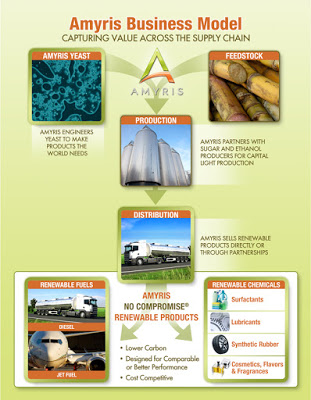 Amyris leadership should celebrate its loyal shareholders given how far the company drifted from its earliest promises to investors.  Amyris scientists had developed renewable farnesene from sugar cane using genetically modified yeasts and planned to make it the base chemical building block for a variety of products dependent upon petroleum-based inputs.   At inception in 2003, Amyris raised capital to develop a ‘drop-in’ synthetic transportation fuel based on its core expertise in converting plant sugars in to hydrocarbon molecules.  In 2010, the company’s prospectus for its initial public offering featured a smart diagram of its business model with shiny eighteen wheelers delivering jet fuel to large aircraft. That same business model illustration included a laundry list of renewable chemicals that could be parsed from the company’s chemicals knowhow.

One by one the markets have been discarded as uneconomic  –  at least for Amyris.  Transportation fuels was the first target be left by the roadside.  Despite partnering with Sao Martinho S.A., a Brazilian sugar cane grower and ethanol producer, to co-locate chemicals production next to its facilities, Amyris ‘capital light’ strategy proved too burdensome to turn a profit in the long-term.

By the time Amyris came to investors for its most recent transaction, target markets had been entirely revised to focus on the health, beauty, flavors and fragrances markets.  True enough many consumer products are dependent upon materials and ingredients sourced from petroleum. The company’s proprietary renewable farnesene molecule has broad application for skincare, cosmetics, fragrances and flavors.  Importantly, these appear to be among the few end-markets that afford high enough prices to return a profit on the commercial version of Amyris’ process.

In the three months ending June 2018, Amyris reported $23.2 million in at its topline.  Renewable products were only 28% of the mix at $6.6 million.  The cost of those products was a whopping 90% of sales.

Fortunately, royalties and licenses represented $6.9 million or 30% of total sales and grants and collaborations another $9.7 million or another 42%.  Contribution margins on these revenue sources are substantially higher, providing better coverage of operating expenses than the skimpy 10% delivered by renewable products.

Yet Amyris is still not profitable.  The company continues with an ambitious research and development program at a spending rate near $60 million per year. Sales, general and administrative expenses are also running about $80 million per year with current staffing and operational infrastructure.  Some of the investments in market penetration and business development may prove out in the future.  The company recently announced new deals and agreements that would take the company into health and nutrition products.  The company’s own Biossance brand of beauty products is also expanding into the popular Sephora cosmetics chain in its JC Penny sites.

In the meantime, the numbers depict a company still searching for its footing.  At the end of June 2018, Amyris was capitalized with $171.4 million in debt, including $67.8 million owed to related party.  The company has also taken in $1.1 billion in equity capital, but is running a deficit of $255 million.  The $46 million that Amyris just took in improves the picture somewhat.  There is also something to be said for clearing up the number of outstanding warrants.  However, the deep deficit is troublesome after sixteen years in development.

What is even more worrisome is the continued steep cash requirement to keep operations going.  Amyris burned through $53 million in the first six months of 2018.  The company had $14.1 million in cash on its balance sheet at the end of June 2018 and just before the secondary offering by its venture capital supporters. With only about $60 million in the bank after the recent warrant exercise, shareholder goodwill may need to stretch across another capital raise before the end of the year.