For the last few monthly updates, I’ve been focusing on the big picture, and have neglected to say anything about many of the 10 Clean Energy Stocks for 2020  since I looked at how the pandemic would likely affect each stock in March.

This month, I’m trying to rectify the oversight, and have been posting updates on individual stocks for my Patreon supporters since Friday.  Below is a collection of the updates I’ve published so far.  I am to keep posting one a day until I’ve gotten to all of them, after which I plan to publish another collection of updates on AltEnergyStocks.com for everyone.

In addition, here is the overall performance of the portfolio compared to its benchmarks so far this year: 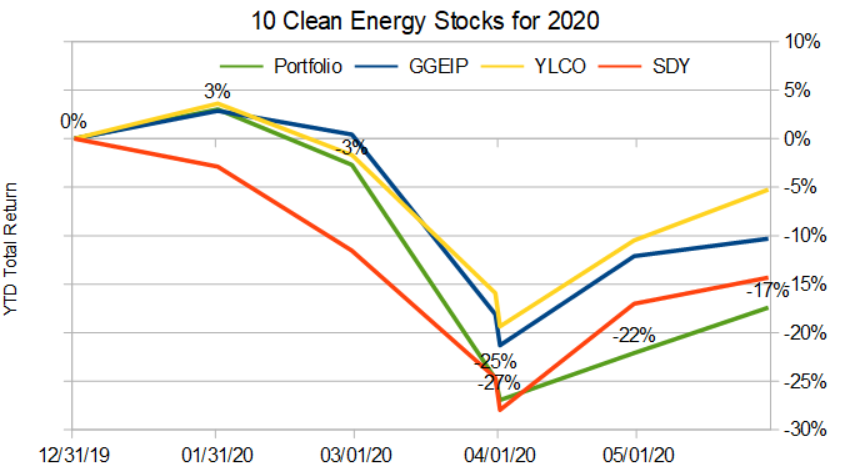 In addition, here is a detailed view of the model portfolio showing the individual positions: 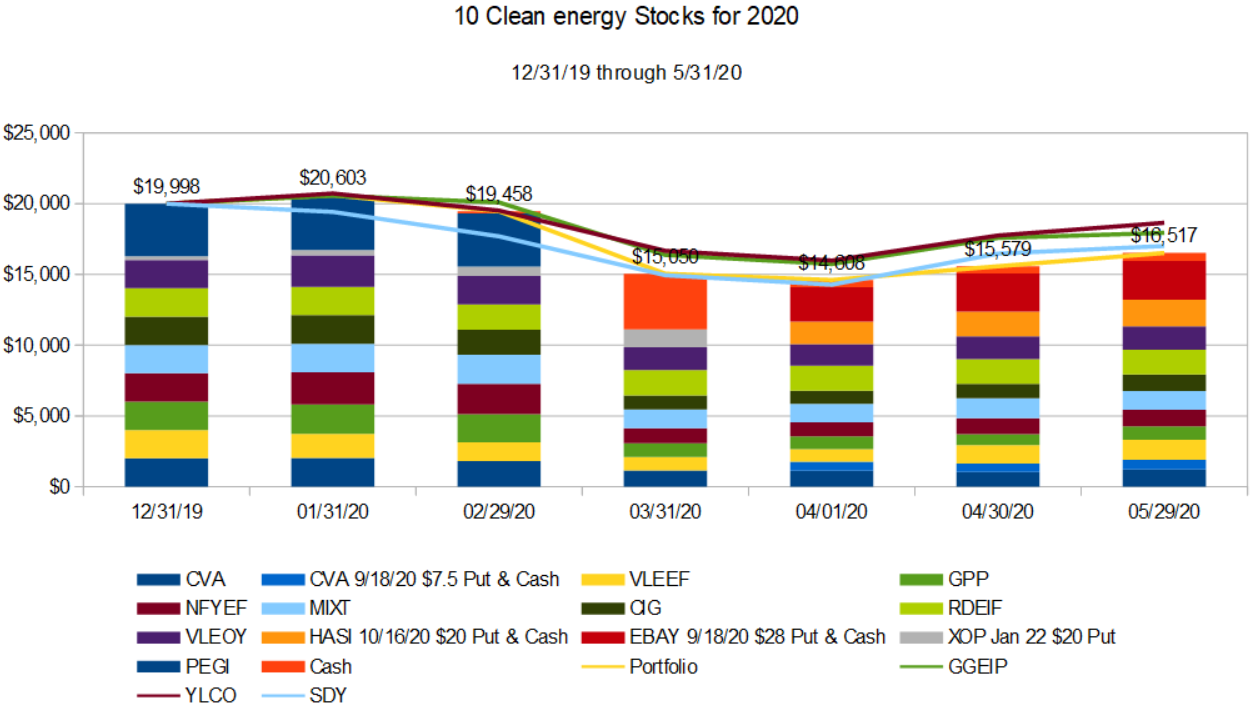 The relatively poor performance of the model portfolio so far this year is mostly due to my attempt to limit trading.  I do that because I want small investors who only look at the market a few times a year to be able to follow along.  Most years, I do no trading at all in the model portfolio, and its performance has seldom suffered for it.  This year I limited trading to two trades at the start of April.

The performance has also been hurt by the fact that I did not expect the strong rebound from March lows.  I still believe it could be short lived… we shall see.

May 28: Thoughts on MIXT Earnings

Mix Telematics reported earnings on May 28th.   As I said in the March update,  “MiX Telematics (MIXT) is exposed to disruption through its customers in the oil and gas and transportation industries.  I expect the damage to be temporary, so keep an eye out for buying opportunities. ”

MiX swung to a net loss of $2.4 million for the quarter compared to a gain of $5.5 million the previous year.  Much of this loss was due to a large deferred tax charge and foreign exchange losses, so this number probably overstates the direct damage caused by COVID-19 and the turmoil in the oil market (oil and gas companies account for a large slice of MiX’s customer base.)   Less daunting than earnings were operating income, which dropped from $6.8 million a year ago to $3.7 million this year, and subscription revenue (up 5.6%) and number of subscribers (up 9.1%) from the previous year.

Given the disruptions to the world economy and the oil and gas sector in particular, the long term effects of the crisis seem likely to be limited.

The company is not offering any projections for the coming quarter or year, but the fact that it is maintaining its dividend and continuing to repurchase stock are very encouraging.  Readers who do not yet have significant positions in MiX should consider buying it at its current level ($8.60 as I write after the close on May 28.)

Last week, French President Macron visited one of Valeo’s plants to announce a EURO 8 billion stimulus package for France’s car industry, and congratulate the auto parts supplier on how it has managed the lockdown and is preceding towards reopening.

The plan includes a large financial backstop for French carmaker Renault, support for the production and purchase of electric and hybrid vehicles, an attempt to “relocalize” auto manufacturing in France, and a scrapping program to get older, more polluting vehicles off the road.

The attempts to relocalize auto manufacturing and subsidies for EVs and hybrids are all likely to help Valeo, which was already a competitive player in the global auto parts industry, with a focus on vehicle electrification, safety, and automation. 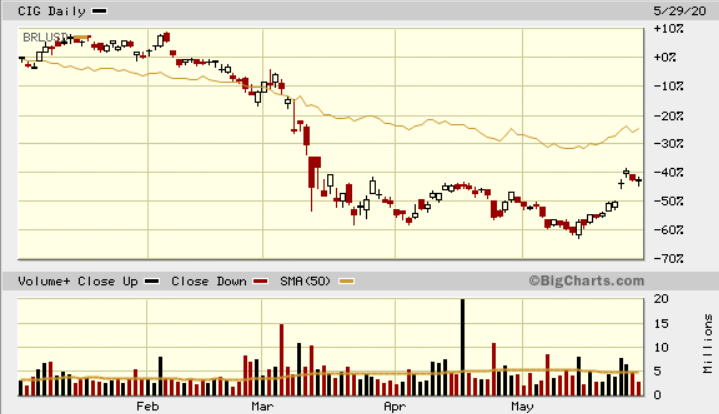 Brazillian utility Companhia Energetica de Minas Gerais (CIG), aka Cemig’s horrible performance so far this year has largely been about its home country Brazil.  If you were wondering if anyone could manage the coronavirus pandemic worse than Donald Trump, the answer is “Yes.”  Brazil’s president, Jair Bolsanaro, has been actively undermining local officials who take steps to try to slow the spread of the virus, has fired one health minister, lost another one over a clash about chloroquine as a treatment for the disease, and has most recently appointed a military general with no experience in public health to take their place.

With a raging epidemic second only to that in the US (as I write on May 29th, Brazil has roughly a quarter the number of cases and deaths from COVID-19 as the United States in a country with roughly three fifths the population.  Unlike the US, where the initial outbreaks in New York, California, and Washington state have been brought mostly under control, known cases in Brazil are still doubling every two weeks. 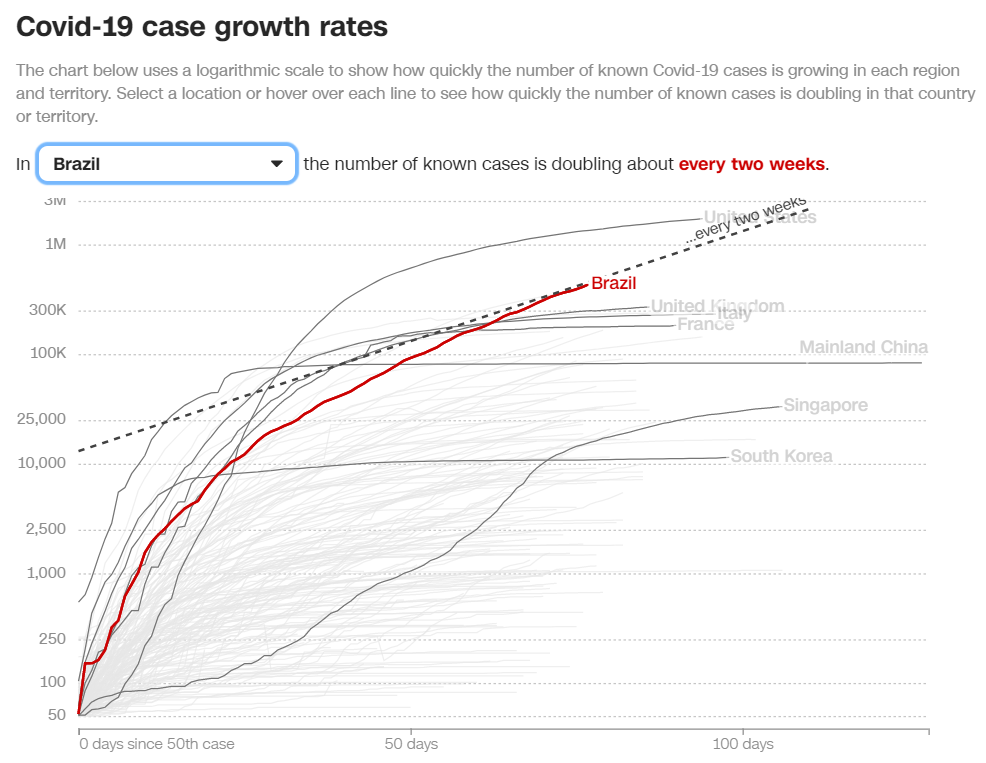 On the business side, Cemig’s electricity sales have fallen significantly less (2%) than most US utilities, and they are taking numerous measures to conserve cash (including an annual dividend cut to 0.5 BRL /share or about $0.094, down from $0.11 in 2019.)

As bad as things are in Brazil, I think Cemig is doing what it needs to weather the storm… even if the storm gets worse.  While it does seem likely that the situation in Brazil will get worse before it gets better, I am holding because I don’t like to sell when most investors are running scared, unless the problems are likely to be fatal for the company.  As an essential utility, I expect Cemig will survive and return to health, so I continue to hold despite the uncertainty.

International water, waste, recycling, and environmental utility and service firm Veolia is well positioned to weather the impacts of the coronavirus.  Most of its services are considered essential in the countries in which it operates, and it is also well positioned to benefit from Europe’s green-oriented stimulus plan.

While the short term effects of the pandemic are likely to include increased costs for employee safety and delayed payments from its utility customers,  I expect the long term effects of the coronavirus  on its business to be positive as much of the world sees all the more reason to value cleaner air and water.

Veolia reduced its annual dividend (paid in May) to 0.50  Euro from 1 Euro in previous years to conserve cash during the crisis, but is on solid financial footing overall.  It’s oversubscribed  700 million euro 8 year  bond offering in April demonstrated its ability to easily obtain financing even during the crisis.

More on the way

I post updates for the remaining stocks (CVA, HASI, EBAY, NFYEF, GPP, RDEIF) in the next week or so… or you can see them on a daily basis by joining my Patreon supporters.