This monthly update for my Ten Clean Energy Stocks model portfolio is in two parts.  I published my thoughts on the current market turmoil on March 2nd.  You can find them here.  I’m not even going to get into the Fed slashing interest rates like they were a furniture warehouse going out of business on March 3rd except to say that apparently they are more afraid of the effects of covid-19 on the economy than they are of appearing to panic.

You can see overall performance for January and February in the following chart.  Not that it means much any more after just a couple days of rebound. 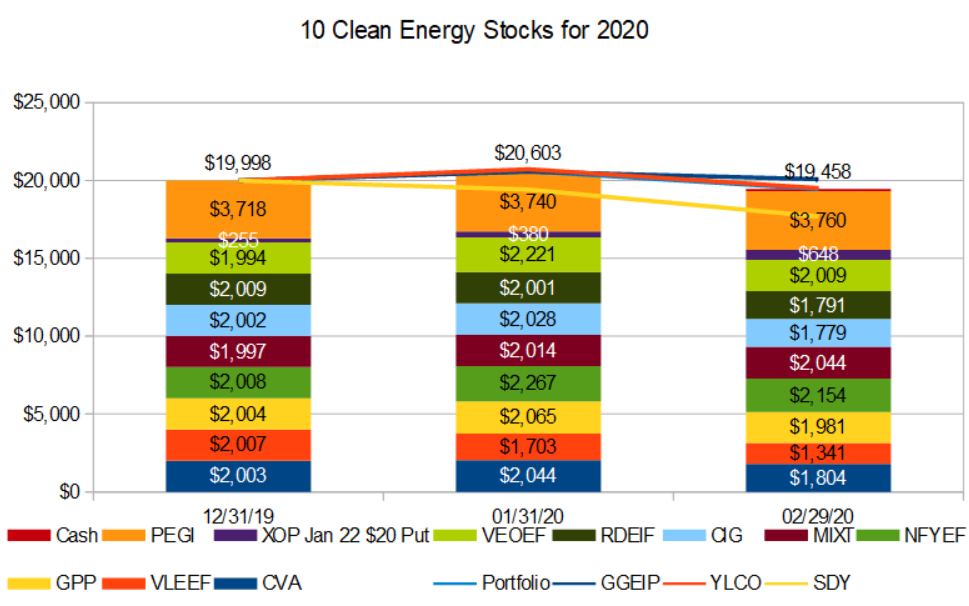 As planned in a down market, the two positions intended to hedge the portfolio have been performing well.  The Put on SPDR S&P Oil & Gas Exploration & Production ETF (XOP) has risen in value along with the precipitous decline in XOP.  Gains on this and Pattern managed to offset half of the declines of the other positions in the portfolio.

Pattern Energy Group (PEGI) shot up above $28 when hedge fund Water Island Capital called on shareholders to vote against the planned merger arguing that Pattern would be worth more as a stand-alone company.  I delved into the details here, and told readers I thought it was a safer bet to just sell for $28 a share.  The stock market implosion since has undermined Water Island’s case that investors should put their trust in the market rather than in the cash in hand offered by the Canada Pension Plan Investment Board.  After selling on the way up, I bought back in on February 28th when Pattern briefly fell below $27, which once again made PEGI look like a good place to park some cash.

The current rebound in the market is an opportunity to reduce our market exposure.  As I have been saying for the last year, I think it’s a good idea to take some profits in our winners and build up a large allocation to cash.  If I am right about covid-19 being the catalyst which starts a new bear market, there will be nothing more valuable than cash to buy up newly cheap stocks at bargain prices after the bear runs its course.

I have not seen a lot of surprises in fourth quarter earnings so far, and the economic disruptions of the pandemic are likely to be much more significant in the short term. So rather than delve into earnings reports, I will instead take a look at how the individual companies are likely to be affected by the efforts to deal with covid-19.

Waste to Energy operator Covanta Holding (CVA) may see a boost to its revenues from the disposal of medical waste, but will probably continue to see headwinds from low prices for the scrap metal and energy it sells.

French autoparts maker Valeo SA (FR.PA, VLEEF, VLEEY) is seeing disruption of its supply chain in China, and will probably see further disruption as the virus effects the economy in Europe.  The auto industry as a whole will probably have a bad year as people drive less and delay purchases of new vehicles.  With all the bad news, the stock is down almost a third since the start of the year.  I’m buying cautiously, and will buy more if it falls more.

Ethanol MLP Green Plains Partners (GPP) and its parent Green Plains (GPRE) are going to be hurt by the decline in gasoline consumption, which will also reduce the sale of ethanol.  Pushing in the other direction is a court ruling that the EPA has improperly been granting waivers to the biofuel blending requirements of the Renewable Fuel Standard.  The EPA has until March 9th to appeal this ruling.  If the ruling holds or the EPA does not appeal, it will be applied nationwide.

So far, the Trump administration has consistently sided with the oil industry against the farm interests supporting the ethanol industry.  The oil industry and a number of the Republican senators who serve its interests in Washington are asking the EPA to appeal the ruling.  The Trump administration has to weigh the damage to farm states (whose support Trump needs for reelection in November) against the money it receives from the oil industry (which it also depends on for reelection.)  If the Trump EPA sides with Trump’s voters over Trump’s paymasters, it will be good news for these companies.  If it sides with the oil refiners, the decision will be appealed, and ethanol companies will continue to feel the pain until a higher court has a chance to rule or a Democrat sits in the White House and drops the appeal.

Both stocks are so cheap that I’m buying cautiously, but mostly GPP, which has both less downside risk and less potential upside.

Bus and motorcoach manufacturer NFI Group (NFI.TO, NFYEF) may see some supply chain disruptions, and bus ridership is almost certain to decline.  The supply chain disruptions are probably more important, because transit agencies are unlikely to cancel long planned purchases over a temporary drop in ridership.  Motorcoach customers (roughly a quarter of revenues) are more likely to reduce their buying, especially if a decline in ridership impacts their financial health.

Overall, I expect New Flyer’s business to be hurt, but not particularly badly.

MiX Telematics (MIXT) is exposed to disruption through its customers in the oil and gas and transportation industries.  I expect the damage to be temporary, so keep an eye out for buying opportunities.

Brazilian electric and water utility Companhia Energetica de Minas Gerais aka Cemig (CIG) Spanish transmission utility Red Electrica Corporacion, S.A. (REE.MC, RDEIF, RDEIY), and French water, waste, and energy management conglomerate Veolia Environnement S.A. (VIE.PA, VEOEF, VEOEY) have limited exposure to the economic disruption of the pandemic, although they do have the potential to decline in a bear market if stock valuations in general were to decline.

Overall, the stocks in this list with the greatest economic exposure to the disruption caused by the covid-19 pandemic are Valeo, Green Plains Partners, and MiX Telematics.  Green Plains has some potential short term upside if the Trump EPA does not appeal the recent court ruling.

For Valeo and MiX, the disruption is unlikely to damage their business in the long term, so readers should be ready to buy on any declines, but also maintain healthy cash balances for the future buying opportunities which will appear over the next year or two if I am right that the covid-19 pandemic will be the catalyst that starts a new bear market.  If you have not already done so, take some profits in your winners; long time readers will have plenty of Yieldco positions showing large gains. 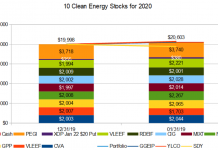