So far, my worries about stock market valuation and political turmoil have not turned into the stock market downturn I’ve been warning readers to prepare for. In fact, September has been a particularly sunny month for both clean energy stocks and the stock market in general. 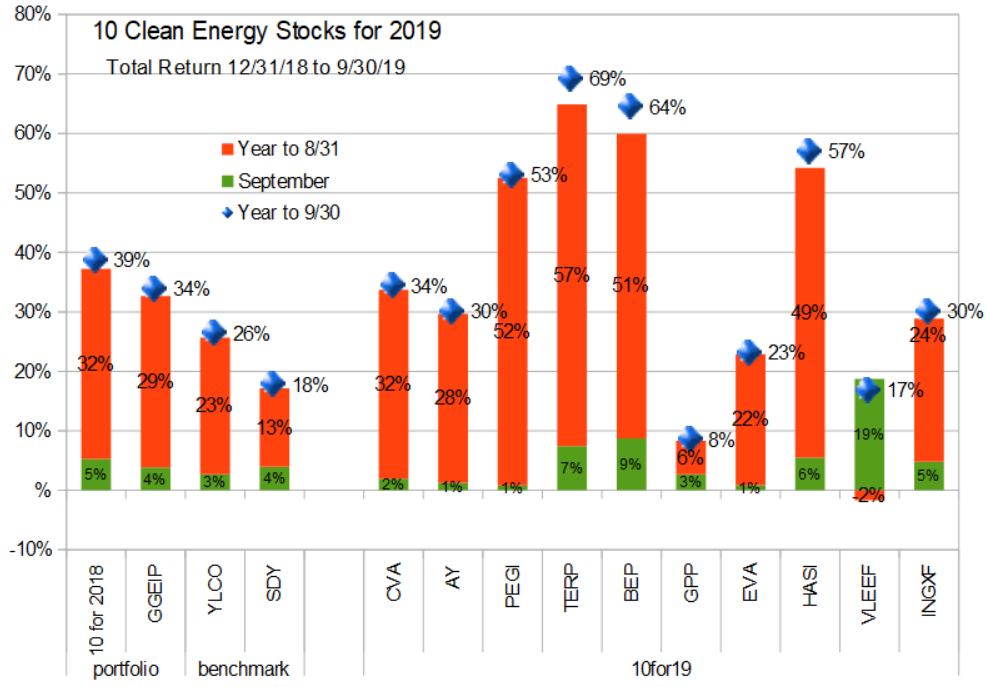 My broad income stock benchmark SDY was up 3.9% and the energy income stock benchmark YLCO rose 2.7% for the month, more than reversing August’s declines. My 10 Clean Energy Stocks model portfolio accelerated upward by 5.3%, as did my real-money managed strategy, the Green Global Equity Income Portfolio(GGEIP), which added 3.8% to August gains.

I’ve been cautioning readers to take a more defensive stance towards the market all year. As I said last month, and as this month proves, that does not mean that the stock market’s rise is over. It means that I believe the risks of a stock market decline outweigh the potential gains of staying fully invested.

To show readers what that looks like, consider the following graph comparing the monthly returns of my real-money strategy, GGEIP, with the returns of the full-invested 10 Clean Energy Stocks Model Portfolio. 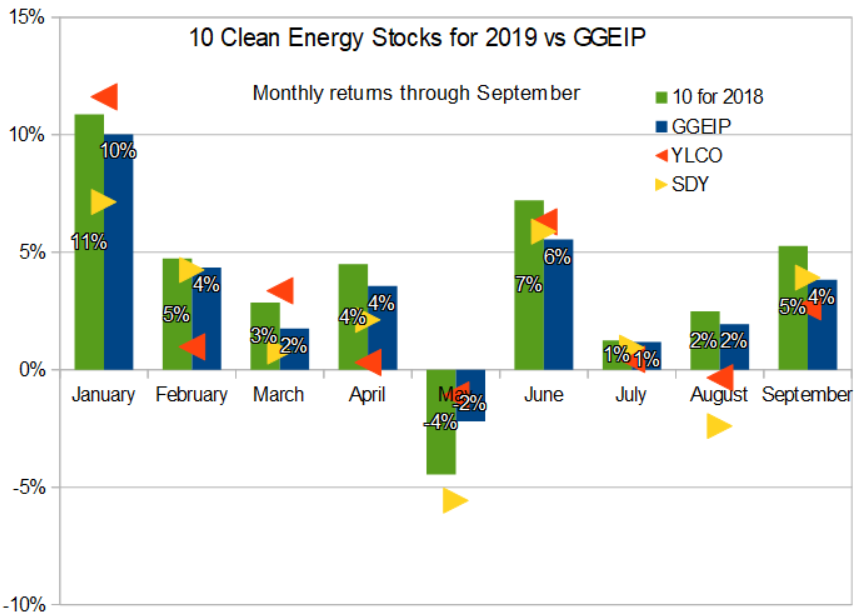 In short, GGEIP has roughly half the exposure to a market decline as the fully-invested model portfolio, but has still participated in 87% (33.7% vs 38.6%) of the total gains this year. I have achieved this asymmetric risk/reward exposure through a combination techniques:

While many readers may be uncomfortable with option strategies, reducing exposure to stocks that have risen sharply and allocating the proceeds to cash and better-valued stocks is a strategy that is accessible to any investor. Each outsized monthly gain (like the 3-4% market return we saw in September) increases valuations and makes the potential decline in a bear market that much greater.

Stock market overvaluation is a lot like the continued crimes in the Trump White House. It can go on longer than any rational observer could possibly expect, but when the reckoning comes, it will likely be both swift and severe. Investors would be wise not to use taxpayer funds to pressure foreign governments into doing any political favors or otherwise using the powers of government for personal gain. Metaphorically speaking, of course.

The biggest mover in September was French auto parts supplier Valeo (FR.PA). The increase was likely mostly due to a general rebound in automotive stocks and the fact that Valeo is generally very sensitive to overall market movements. Although I think Valeo is one of the few relative bargains I’m aware of in the stock market today, I’ve been keeping a relatively low allocation to it in GGEIP because of its strong sensitivity to stock market moves.

Other notable movers were Terraform Power (TERP) and Brookfield Renewable Energy Partners (BEP). Both of these Brookfield Asset Management (BAM) sponsored Yieldcos are starting to look expensive to me, especially Terraform. Terraform management seems to agree, and took the opportunity to raise $251 million in a secondary offering of common stock at $16.84 a share on October 4th. The fact that Terraform can once again raise stock market capital at an attractive price is good news for its future growth in earnings per share, but the new stock will depress its price, at least temporarily.

There has been no news regarding the rumors discussed last month that Pattern Energy Group (PEGI) might be bought by BAM an merged with Terraform, but if Terraform were preparing for such a merger, the company would have probably delayed its secondary offering in order to keep its stock price up and consummate the merger at a more attractive valuation. For this reason, I think it is unlikely that the rumors are going to amount to anything.

More details have been emerging about the deal Donald Trump has been promising corn and ethanol interests to fix the damage that his EPA has caused with the “hardship” exemptions it has been passing out to oil refiners like rolls of paper towels thrown to hurricane survivors. I was skeptical of his promises last month, and while the announced goal of selling 15 billion gallons of corn ethanol and soy biodiesel is a step in the right direction, this goal would only stop doing more damage to the ethanol market, and not do anything about the damage already done. It’s also not specific about when the 15 million gallon target is likely to be achieved, and will only happen after an initial public comment period.

In short, the EPA’s actions are continuing to favor oil refiners over ethanol producers and farmers today, while Trump making promises it will stop doing harm at some unspecified future date. That date is looking increasingly likely to be after Trump is either impeached or voted out of office.

Mike Carr, Executive Director of New Energy America summed it up by saying “We’re in this situation because the President broke his promise to heartland voters, and we’ve seen the EPA break his promise each of the 31 times they’ve given away waivers to the oil industry. This Administration has proved again and again that their reflexive support for Big Oil donors and opposition to anything that would move us closer to a clean energy economy wins out over even his strongest supporters in rural America.”

The response of ethanol stocks like MLP Green Plains Partners (GPP) has been positive, but only mildly so. I continue to see Green Plains Partners as the best value (after accounting for risk) in the list of ten, but I expect the potential gains in that stock will come from the prospect of the end of the Trump presidency rather than a more favorable stance towards the biofuel industry at the expense of oil refiner’s from Trump’s EPA.

September was another great month for the model portfolio, but now is not a time to be chasing returns. Valuations are high, and political risks abound. When this market turns around, I expect it to do so surprisingly quickly and dramatically.