Community Solar in New York has a messaging problem. It is confusing, and even some industry professionals have given up in disgust because of aggressive marketing and a lack of clarity.

Fortunately, aggressive marketing is not universal among community solar developers.

Unfortunately, the lack of clarity is almost universal.

The system the New York utility regulator set up for community distributed generation (CDG, a term which includes community hydropower and community wind as well as community solar) is counter intuitive for most potential customers. 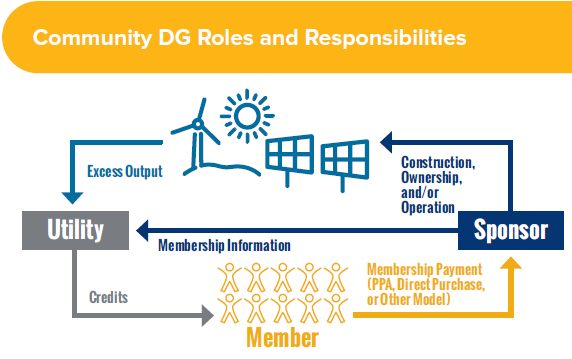 As shown in the diagram above, the electric utility pays for a project’s electric production with credits which can be used to reduce the electric bills of any of its customers in the same load zone. The project sponsor cannot directly monetize these credits, but instead signs up CDG members (also called customers or subscribers) who pay the sponsor in return for the credits, which reduce the cost of their electric bills.

The confusion arises because most individuals who sign up for a CDG contract (which can be a purchase or a subscription model) think of it as buying solar (or hydro or wind) electricity. In many cases, the credits are even denominated in kWh. Others are denominated in dollars.

In fact, CDG bill credits are that and only that: bill credits. CDG members are getting the financial benefits of clean power, but not the environmental benefits. According to Jeff Irish, VP and General Manager of solar installer and community solar developer SunCommon, the utility gets the right to claim that it is using solar power, a benefit that it uses to meet state requirements under the Clean Energy Standard. The Value of Distributed Energy Resources (VDER), which is used to calculate the value of the credits members receive, includes a payment (“E”) for the environmental attributes of the energy generated.

The CDG members receive the “E” payment as part of the bill credits they receive, while the utility gets the environmental attributes of the electricity. These attributes include the right to claim that it is using solar (or other renewable) power equal to the amount generated by the project. This renewable energy becomes part of the energy mix used by all the utility’s energy supply customers. The solar energy generated is therefore shared between all of the utility’s energy supply customers, and reflected in the utility’s environmental disclosure. It also helps the utility meet its Clean energy Standard requirements.

The problem comes from double counting. If community solar members sign up just for the financial benefits (which can be substantial – typical savings are a 10% discount on the utility bill) it does not matter at all if they think they are getting solar electricity. If, on the other hand, the members signed up in part because they want to advance solar energy in New York by making sure that all the electricity they personally use is renewable, they will be disappointed if they learn that “their” solar electricity is being used by their utility to meet its Clean Energy Standard mandate.

This is why US EPA guidance regarding green power claims clearly states that purchasers of green power ensure that the contract “conveys the full rights to the environmental benefits of the generation source. In the United States, this is generally substantiated through the conveyance and ownership of renewable energy certificates (RECs).” Without the REC tracking mechanism, there is a risk that people will claim to be using more renewable electricity than is actually generated. For every megawatt-hour (MWh) of renewable electricity generated, only one person can claim to have used it, and that person is the one who bought and retired the REC (or had the REC purchased and retired on their behalf.)

While New York community solar members do not get the right to claim that they are using renewable energy with their subscriptions, there is a loophole.

Hydropower from facilities put in service before 2015 does not meet the eligibility requirements of New York’s Clean Energy Standard, with a few exceptions. Some hydropower facilities smaller than 5 MW are switching over from previous power purchase agreements with their existing facilities to compensation via the CDG mechanism and the Value of Distributed Energy Resources (VDER). Those facilities that do not meet those eligibility requirements do not get the “E” value of VDER, and the hydropower operators retain the RECs, which are tracked by the New York Generation Attribute Tracking System (NYGATS.) These RECs cannot be sold, but they can be transferred to CDG members.

One such community hydro company is Natural Power Group, Inc., which is signing up customers at its Wallkill Community Hydro, and Wappingers Falls facilities. Central Hudson customers receive bill credits on their electric bill at a 10% discount. This small, family-owned firm does not receive the “E” value in VDER, and so its customers are eligible to receive RECs and other environmental attributes of its generation, but does not currently provide them to customers. Natural Power Group’s contracts specify in the fine print that the customer has “no right with respect to any attribute or commodity associated with the hydro, including any environmental attributes, renewable energy attributes or credits, carbon offset credits.”

When asked about this, Natural Power Group owner Sarah Bower, replied that the contract was written when she and Central Hudson believed that the company would be receiving the “E” value. More recent rule changes mean that Natural Power Group is not receiving the “E” value. According to Bower, “Although we are creating environmental certificates that are registered with NYGATS, they are going nowhere.” She had not previously looked into transferring these certificates to customers because she believed that “it would simply increase book keeping with no tangible results.”

Many New York community solar customers and community hydro customers don’t know if they should be claiming to be using renewable energy. On the solar side, a cleantech professional wrote that when he asked for “more clarity on the REC question… the sales process fell apart” and the community solar developer lost what should have been an easy sale.

On the hydropower side, the current limbo has led different customers to reach different conclusions and make different claims. A group of representatives of local governments participating in New Yorks’s Clean Energy Communities Program recently gathered to share the result from their climate action planning efforts. Several had signed up for community hydropower with Natural Power Group, but their interpretations of the impact on their carbon emissions varied.

Ulster County and the Town of Marbletown chose to strictly adhere to the EPA guidelines. According to Amanda LaValle, Coordinator at the Ulster County Department of the Environment, “In line with the EPA guidance, we deem it necessary to own the environmental attributes in order to make green power claims. For electricity, this means owning the RECS. Ulster County has been buying 100 percent green power using voluntary RECs since 2014, and the County’s need for RECs has been decreasing since then due to energy efficiency upgrades. The County intends to acquire an increasingly larger portion of its RECs from local sources, such as through its contract with Natural Power Group.”

The Town of Rosendale also spoke to Natural Power Group about RECs, and concluded that, since Natural Power Group is not selling the RECs to anyone else, it can count them towards its carbon reduction goals. While not at the meeting, the Town of Woodstock states in its March 25th environmental report to the Ulster County Climate Smart Committee that Woodstock’s “recent subscription for hydroelectric power from the Natural Power Group will eliminate most of the carbon emissions attributed to electricity.” In an email, Kenneth Panza, Woodstock’s Liaison to the committee, explained that he believes Woodstock has no need for RECs or other environmental attributes to make these claims.

Natural Power Group is investigating what would be involved in providing RECs to customers who want them. Its supply of RECs is far more than would be needed for this task. Without the “E” value from VDER, the credits the company receives for its generation are worth less than half what retail customers are charged for the same amount of electricity used by its customers.

It is possible that the company may find that it is able to provide its customers two to three times as many RECs as they need to cover the electric use. This could be useful to Towns such as Rosendale and Woodstock which also buy electricity for street lights, because street-lighting bills are not eligible customers for community solar or hydroelectric, and these Towns might be able to apply the extra to electricity usage from streetlights or other bills that are signed up for community solar (and hence do not receive RECs.)

The possibility that Natural Power Group may be able to transfer more RECs to a customer than their current usage also holds a risk for others claiming environmental benefits without actually owning the RECs. RECs can be transferred at any time until they are “retired” as part of a customer’s claim to be using renewable energy. While Natural Power Group’s RECs are currently in limbo, until Natural Power Group actually transfers these RECs, those of its customers who are claiming to be using renewable electricity are opening themselves up to embarrassment. If used in advertising to sell a product or service (i.e. “made with 100% renewable electricity”), such claims can even invite legal liability.

[UPDATE: After researching the issue further, Natural Power Group has said, “We are receiving non-tradable certificates [RECs] (or will be officially as soon as the account is transferred from Central Hudson.) These certificates are available to our customers under contract with us. This allows you to claim that you are buying renewable energy in the form of hydroelectric.]

No good deed goes unpunished, and the system has led to confusion. In some cases, confusion has led potential customers not to sign up for community solar because they are not getting the RECs. More often, it leads to customers assuming that they are getting renewable electricity when they are not. This leads to double-counting and undermines the State’s renewable energy goals. Some customers who want to do their part by buying renewable electricity believe they are getting it when they sign up for community solar or hydro-power, even when they are not.

Customers need to realize that community solar and community hydropower are a great deal even if they do not include renewable electricity. Typical subscriptions provide utility bill credits at a price of ninety cents on the dollar. Purchases of panels at a community solar farm (such as those offered by SunCommon) can provide even greater financial savings for customers able to use the Federal tax credits.

Fortunately, there is nothing to prevent a community power customer from also buying RECs by switching to a green energy supply company, urging their municipality to join a green Community Choice Aggregation program, or persuading their community hydro company to include RECs in their contract. The significant savings from community solar and hydro can easily pay for the low cost of RECs. While some retail customers may find themselves using their entire savings from community solar to buy green electricity, large and sophisticated buyers like Ulster County or Community Choice Aggregators can purchase RECs for a fraction of a penny per kWh, or less than one percent of a typical electric bill.

Tom Konrad, Ph.D., CFA is an investment analyst and portfolio manager specializing in clean energy stocks. He is active in promoting clean energy in New York’s Hudson Valley through his role as the Chair of the Town of Marbletown’s Environmental Conservation Commission. His writing can be found on Greentech Media and AltEnergyStocks.com.