Those were the words said to me by a friend of mine who’s spent 41 of his 45 years on earth in Southern California.

To be honest, I’m not sure he’s ever even seen an oil delivery truck.

But here in the Northeast, there are still plenty of folks that rely on heating oil. Particularly those living in older homes in the cities, and of course up in some of the more remote rural areas of Pennsylvania, Vermont and New York, where you still can’t access a natural gas line.

In any event, those who do still rely on heating oil are certainly hoping for a mild winter this year. Because according to the Energy Information Administration, a crisis could be coming.

Check out this excerpt that was recently published in the industry publication, This Week in Petroleum. . .

For the week ending October 5, distillate inventories in the U.S. Northeast (PADDs 1A and 1B) were 28.3 million barrels, about 21.5 million barrels (43 percent) below their five-year average level (Figure 1). Distillate inventories have historically been used to meet normal winter heating demand but are also an important source of supply when demand surges as a result of unexpected or extreme cold spells. The low distillate inventories could contribute to heating oil price volatility this winter. In addition, outages at several major refineries, notably Petroleos de Venezuela’s Amuay Refinery, Shell Oil’s Pernis Refinery in the Netherlands, and Irving Oil’s Saint John Refinery in Canada, have added to the fundamental market pressures in the Atlantic Basin.

If you’re relying on heating oil to keep your home warm this winter, you definitely should consider topping off the tank before winter kicks in, and maybe get used to wearing a light sweater.

And for more long-term planning. . .

If you can access a natural gas line, I strongly recommend making the investment. Although natural gas prices are going to start heading back up next year, there’s still going to be a lot more volatility in heating oil pricing going forward.

Interestingly, up in some of the more rural areas of New York and Vermont, where heating oil is quite common, solar is quickly becoming very popular. Particularly for farmers who use solar to supplement their power generation.

One gentleman I met last week during a trip to Essex, NY installed a solar array two years ago. Since then, he’s been able to offset his heating oil usage by more than 40 percent. And at the Essex Farm, owners use a sizable solar array to power their small, but profitable operation.

October 16: Will Bankrupt Solyndra Get Another $1.6 Billion?

As Bright as a Beijing Sky

While taxpayers get screwed on the Solyndra deal, Solyndra owners may now be able to walk away with another $150 million.

I’m serious! Turns out the IRS has suggested Solyndra’s bankruptcy plan was essentially a way for owners to use an empty shell corporation to avoid paying taxes.

As stated by the IRS, the only reason for the shell corporation to exist post-confirmation is to enable its owners to exploit tax attributes, which would be lost in liquidation.

Tax expert and Forbes’ contributor Robert Wood recently wrote: “Is it a good deal for creditors to get $7 or $8 million out of the Solyndra mess? Maybe, but the IRS claims the outsize tax benefits Solyndra’s smiling owners will reap are more like $150 million.”

If this all adds up, I think the real conspirators here are the folks that facilitated this entire Solyndra fiasco.

At least the Chinese have a market for their product…

Nouriel Roubini pointed this out last summer, using the Soviet Union in the 1960s and 1970s, and East Asia before the 1997 financial crisis as examples of over-investment scenarios that have gone wrong.

Rest assured global solar demand will only continue to grow by leaps and bounds. And this is why the big dogs like GE (NYSE: GE) and Siemens (NYSE: SI) are watching and waiting patiently, ready to pounce when the future of China’s solar industry inevitably becomes as bright as a Beijing sky during rush hour.

If you’re unfamiliar with that reference, here’s a visual: 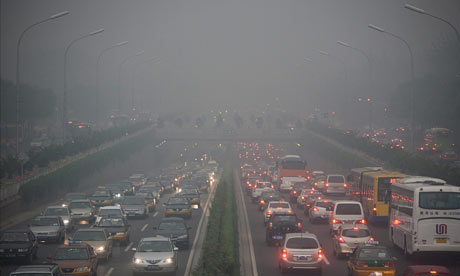 There was so much enthusiasm when high-performance battery manufacturer A123 Systems (NASDAQ:AONE) came on the scene.

The promise of an advanced battery manufacturing facility pumping out batteries for next-generation electric cars while providing jobs for US workers was a bold one, and one that a lot of folks cheered. But certain realities rapidly turned that promise into what now looks like another bankruptcy in the alternative energy space.

Yesterday A123 put out the following statement. . .

“The company may not have sufficient cash to fund operations and may need to seek the protections provided under the U.S. Bankruptcy Code. No assurance can be given that the company will be able to avoid restructuring, reorganization, or a bankruptcy filing.”

Now despite the fact that we never wished anything but success for the company, we’ve been warning investors all year about this one, even when a handful of analysts got all giddy when the stock popped back in June.

Yesterday, A123 Systems (NASDAQ:AONE) shot up more than 50 percent after announcing it had developed an improved lithium-ion cell that can cut costs of electric cars.

While I’ve always been a big supporter of this company (wishing them the best), as an investor, I can’t help but to wonder what happened yesterday.

Just a couple of months ago, the company began replacing defective battery packs at a cost of $51.6 million. This helped the company report a record loss of $125 million for Q1, 2012. The company even had to issue a “going concern” statement.

Last month, when shares closed below $0.90 the company had long-term debt of $161 million compared to a market valuation of $129.3 million. To put that in perspective, when the company went public, it debuted at $13.50.

Now don’t get me wrong. The company’s announcement of its technological breakthrough should not go unnoticed. But neither should the fact that this company is still dealing with $51 million in battery
replacements, foreign competitors that continue to maintain a significant manufacturing cost advantage, and of course, bankruptcy concerns.

Sure, technological breakthroughs are great. They’re important, and they’ve been produced by plenty of other companies that no longer exist today. That’s the reality. Personally, I do hope A123 comes out on top when all is said and done. But it’s going to be a long, tough ride. And I just don’t see any rational justification for a 50% pop on an announcement of a technological breakthrough from a company that’s barely treading water right now. In fact, I honestly wouldn’t be surprised if the company went belly up by the end of the year. I hope I’m wrong on that, but it doesn’t look good.

Unfortunately, I may not have been wrong when I wrote those words.

And what really makes this sting is that A123 landed a $249 million federal grant to build a U.S. factory back in 2009. Rest assured, you’ll be hearing plenty about that over the next few days. And rightly so. After all, these are your tax dollars we’re talking about here. And you have every right to know how they’ve been spent.

Of course, you’ll probably be hearing all about it tonight during the second presidential debate, too. Romney campaign strategists must be doing back flips right now.

I just hope the analysis following the debate doesn’t mutate into yet another attack on electric cars. Which, as I’ve said a thousand times before, serve as one of the many tools we can use to end our reliance on OPEC.

But I’m sure it will. Because nowadays, it’s more important to dive into the pool of partisan buffoonery than it is to embrace positive contributions to our national security, our environment and our nation’s long-term economic sustainability.

TK: First Solar (NASDAQ:FSLR) has signed a memorandum of understanding with PT. Pembangkitan Jawa Bali Services to collaborate on and deliver 100 megawatts of utility-scale solar power plants in Indonesia.

“We are excited by the opportunity to collaborate with a world leader in solar energy for the development of utility-scale PV power plants in Indonesia. Solar PV electricity can help Indonesia meet its fast-growing power needs while reducing its dependence on fossil fuels,” said PJB Services president Bernadus Sudarmanta in a press release. …

Jeff Siegel is Editor of Energy and Capital, where his notes were first published.