LDK Solar (NYSE:LDK) has sent a revenue warning and cut its full-year revenue forecast for the second time this year. The company is now expecting Q3 revenue to come in at between $220 million and $260 million. Analysts were expecting more than twice that on the low-end of LDK’s estimates with $453.6 million. And to add insult to injury, I overhead an analyst last week saying China solar companies, like LDK, are on a one-way track to penny stock status. Ouch!

I was actually at the Solar Power International Conference last week, where I overheard that analyst, and I’ll have some updates on the solar space later in the week.

All in all, the solar industry is exactly where I’ve been saying it is – maturation mode. Growing pains are really starting to sting, but there are definitely some silver linings, especially for installers. Although some companies falling into the installation category are about to get trounced thanks to a Consumer Reports investigation that’ll highlight a handful of shady operations in the solar installation game.

That issue of Consumer Reports is coming shortly, and you can read more about it here. In the meantime, we continue to watch everything unfold from a safe distance, waiting patiently for a bottom sometime next year.

As always, I was overwhelmed with an avalanche of data that continues to illustrate the rapid growth of the solar industry.

There are a few reports I picked up at the conference that I’ll be sharing with you throughout the week.

The first comes from the folks at the Solar Energy Industries Association and the Vote Solar Initiative, and it highlights the top 20 commercial solar users in the US. 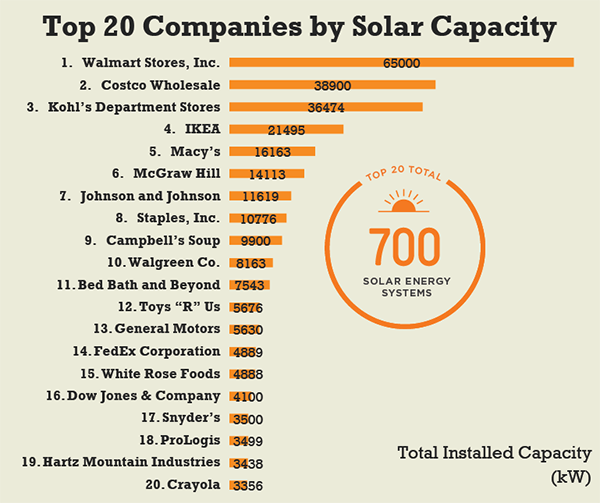 Some key findings of the report include:

General Electric (NYSE:GE) announced yesterday that its new Energy Storage Unit has landed $63 million in new Durathon battery orders since that particular unit launched in July. In its first weeks of operations, it secured 10 new telecom customer orders in Africa, Asia and the US. These batteries will power more than 3,500 cell towers.

As supporters of the new energy economy, we understand the importance of cost-effective energy storage technologies. And while there are plenty of opportunities out there, GE will remain aggressive. There’s just too much at stake for this global behemoth not to.

The batteries that will power those 3,500 cell towers can function in a variety of extreme conditions and store as much energy as lead-acid batteries twice its size, while lasting up to ten times longer.

In other energy storage news, a small UK company called Atraverda, Ltd. just secured its first commercial battery order in the US. The company announced yesterday that it finalized a supply agreement with ZENNRG to supply batteries for a smart grid, distributed energy storage application. The first year of the supply agreement is worth about $1.2 million.

A new Congressional Budget Office (CBO) report has indicated that US federal policies to promote electric vehicles will cost $7.5 billion through 2019 and have little impact on overall national gasoline consumption over the next several years.

It’s that last part that I’m pretty sure the media knuckle-draggers will neglect to mention.

I tend to put a lot of faith into what the CBO says. It seems to be one of the few places where partisan influence is absent. So I have little doubt that there is relevance to this report. That being said, priming the pump for a transition away from conventional internal combustion isn’t going to result in a major displacement of gasoline and CO2 emissions overnight.

When the US government plowed an enormous amount of tax payer dollars into developing an infrastructure that would ultimately support an Interstate Highway System, those highways weren’t particularly crowded in the first few years following their completion. It took time.

The US government also provided an enormous amount of incentives to automakers in the early part of the last century, as it was clear that taking the lead on auto manufacturing would strengthen the nation’s economy and provide a strategic advantage in terms of national security and military initiatives.

I would argue that electric vehicles offer the same benefits.

The world will eventually move away from conventional internal combustion. It won’t happen in a matter of a few years or even a few decades, but it will happen. And it’s starting now. And as we slowly move away from conventional internal combustion, we can slowly begin the next chapter in taking the lead on the next generation of auto manufacturing.

As well, the more EVs we have on the roads, the less foreign oil we demand. That’s an indisputable fact that should not be trivialized. And little by little, as more of these electrified vehicles hit the streets, the more wiggle room we’ll have to compete and prosper in a post-peak world.

It’s also worth noting that while some may kick and scream about $7.5 billion over the course of about ten years, which works out to about $75 million per year, we continue to charge taxpayers roughly $4 billion a year for oil industry subsidies. And of course, this does not include the blood we continue to spill overseas in an effort to secure those lucrative oil supplies.

So when folks start carrying on about this new CBO report, I would urge you to remind those with partisan blinders that $4 billion a year in oil subsidies does zero to displace gasoline consumption and CO2 emissions, and actually facilitates our continued reliance on a resource that is rapidly being depleted.

$75 million a year, however, actually provides the platform for a strategic transition away from a transportation system that will only cost more tax dollars and
more lives as we move forward.

Now I should clarify, I’m no fan of any of these subsidies. Quite frankly, I’d love nothing more than to see every single energy subsidy abolished and allow the market to dictate the winners and losers – not Washington. Because if that were to happen, oh we’d quickly find out just how expensive gasoline really is – and just how lucrative electrified transportation will be.

Electric vehicle production costs will continue to fall as we move forward, while the costs to maintain our reliance on oil will only increase.

Of course, if we do pull back the curtain of subsidies and allow the consumer to pay the real price for gasoline – one that is not the result of both direct and indirect subsidies – you wouldn’t need a single tax credit to get folks into electric cars. The price at the pump would be well over $6.00 a gallon, and those EVs would practically sell themselves.

Now I’m not so naïve to believe that will happen anytime soon. The corporate puppet masters that run Washington simply won’t allow it. But if we’re going to be honest about the value of electric vehicles, we must at least be honest about the fact that Washington continues to funnel more of your tax dollars to a very mature and very profitable oil & gas industry than it does to facilitating the growth of vehicle electrification.

And if we’re going to be honest about letting the market dictate winners and losers, than we must stand behind our convictions and hold both sides of the aisle accountable for continuing the illusion that a free market really exists.