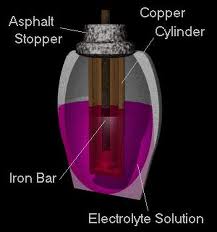 In my last post Paper Power I outlined the attempt to develop a battery using carbon nanotubes and paper.   The materials seemed a bit unbelievable and it sent me into the history books to look at the battery.  In the mid-1700s Ben Franklin may have been the one who first coined the term battery to describe the capacitors had strung together for his experiments.  We all know about the scientist, turned politician.  What is less well known is that the ancients may have also attempted a battery-like instrument now called the “Baghdad Battery.”

The so-called battery was found in a village near Baghdad, Iraq and is dated roughly between 250 BC to 224 AD.  It is a simple terracotta pot in a cylindrical shape.  Inside is a copper tube made from a rolled up copper sheet wrapped around a single iron rod something like a nail.  Now we know copper and iron form an electrochemical pairing.  If an electrolyte is introduced, potentially an electrical voltage can be produced.  There is speculation that the Baghdad Battery contained wine or lemon juice that served as an acidic electrolyte.  The design has been tested and found to produce modest electrical charge.

Archeologists have suggested that the instrument may have been used for electroplating gold onto silver objects something like a galvanic cell.  Lending credence to this idea is the existence of very fine silver objects in ancient Iraq that were plated with very thin layers of gold.  Others argue strongly against the electroplating theory since it appears Iraq ancient silver smiths may have been using conventional fire-gilding with mercury instead.  Acupuncture and electro-stimulation for religious experience was two alternatives.

It is less clear whether the Baghdad instrument successfully served its intended purpose.  Perhaps those inventors were as frustrated as the developers as A123 Systems, Inc. (AONE:  Nasdaq), claims an important breakthrough in lithium ion battery technology using nanophosphate chemistries to render batteries safe even at high temperatures.  Thermal runaway has plagued A123 Systems and other developers chasing electric car and communications markets, both of which require large battery installations that must work under high temperatures.

The news could not come any too soon for shareholders of AONE.  The stock has languished and is trading closer to its 52-week low than the high to the period.  A123 has consistently grown sales, which reached $159 million in the year 2011.  However, costs have been experiencing their own “thermal runaway” and the company’s losses have grown even faster.

Most investors following the company focus their attention on A123’s technology, but I think it is time to consider the reality of the balance sheet and whether the company still has the juice to support its scientific pursuits.

A123 has also been working its way through a cash hoard.  At the end of March 2012, there was $116.2 million left.  This might be considered a hefty sum by others but will not last the year if A123 does not trim its cash burn.  In the year 2011, the company used approximately $21 million in cash per month to support operations.  In the first quarter the burn rate had been reduced to about $15.5 million per month.  Even at that much lower rate, current cash in the bank will only support operations for another six months.

We do not know much about the Baghdad Battery, but one thing is clear, people have been focused on power for a long time.  The jars may not have delivered anything close to what its inventors intended.  With a dwindling bank account, A123 Systems may be less sanguine about the success in bringing their nanophosphate chemistry off the design bench and putting it into stores.
Debra Fiakas is the Managing Director of Crystal Equity Research, an alternative research resource on small capitalization companies in selected industries. Neither the author of the Small Cap Strategist web log, Crystal Equity Research nor its affiliates have a beneficial interest in the companies mentioned herein.