The market for reliable back-up power in homes and businesses is booming.

With more people working from home and increasing news coverage of power outages due to severe weather events and public safety power shutoffs in California (not to mention domestic terrorism), power reliability seems like it’s destined for a long term boom.

A decade ago, if you wanted backup power, a generator was the only option.  Now, there are an increasing number of battery-based alternatives beginning to compete with generators to provide back-up power.  While most battery-based solutions are better than gas or propane generators when it comes to carbon emissions, none of them can yet beat traditional generators in every way most homeowners and businesses consider important.  It’s more of a “horses for courses” type scenario with the best solution depending on price, the amount of power needed, the length of power outage the buyer is preparing for, and convenience.

Traditional gas generators which run off the utility gas network are a relatively inexpensive solution for a homeowner looking to power their entire home for extended power outages lasting days or weeks.  The main downside for such gas generators is that they won’t work if the weather events or other factors cause a gas outage at the same time as an electrical outage.  For example, during the 2021 Texas Power Crisis, one of the major causes was a cascading problem of cold temperatures shutting down both gas supplies and electric generation.  The resulting lack of electricity caused further problems with gas supply leading to further electric shortfalls, and so on.  All in all, gas supply dropped by approximately 56 percent (and production in Texas dropped by approximately 40 percent) during the crisis.  This means that even people who had home gas generators may not have been able to use them when the power went out.

Generac and competitors’ propane generators share the low cost and most of the convenience of gas generators but cost more to run because they rely on propane stored in a tank on the premises, and delivered propane fuel costs far more than pipeline gas.  On the other hand, local storage of the fuel makes them more reliable in an electrical outage that lasts a few days even if the crisis also affects the natural gas supply.  On the downside, the generator will eventually use all the fuel in the tank, and a prolonged crisis may interfere with propane deliveries.

Gasoline and Diesel generators are typically smaller than the natural gas and propane generators. They typically do not have the capacity to power a whole home and deliver their power through outlets on the generator itself.  Although they are not a solution for whole home power backup, they can be used to power critical loads like the refrigerator to prevent food from spoiling and charging electronics.

They are also commonly used by building contractors to work on sites that are not yet connected to the grid.  Their relatively low price point (hundreds as opposed to thousands of dollars) appeals to people who want some backup power but find that a whole home generator is too much for their budget.

There are now a number of home energy battery brands in addition to the best known Tesla (TSLA) Powerwall.  These include the PWRcell offering from home generator leader Generac (GNR), as well as offerings from Panasonic (Tokyo:6752 or US ADR:PCRFY), microinverter maker Enphase (ENPH), and solar manufacturer SunPower (SPWR).

Until the recent passage of the Inflation Reduction Act (IRA),  the only way to get 24% the US federal Investment Tax Credit (ITC) for a home battery system was to install it with a solar system in such a way that it charged primarily from the solar.  The IRA both extended and raised the ITC to 30%, and made it applicable to stand-alone battery systems.

Now that home battery systems can be installed independently from solar and still qualify for the ITC, we can expect demand to increase as homes and businesses that are not good candidates for solar suddenly see effective prices fall by 30%.

Even with the tax credit, however, home battery storage is likely to remain relatively expensive compared with generators for the purpose of maintaining power during an outage.

If a generator has enough power to supply the electricity need, it can continue to supply that need as long as it is connected to a large enough storage tank or to the gas network.  Because of this, increasing the duration that a generator can protect against a power outage costs very little.  In contrast, doubling the duration that a battery system can protect against a power outage requires doubling the size of the battery, which will nearly double the cost.

Because of this, generators have a significant economic advantage compared to stand-alone batteries when it comes to ensuring long term power supply.  But while secure power supply may be the main attraction for consumers of home battery storage and generators, batteries are far more attractive to grid operators and utilities because of many services they can provide that generators cannot:

Green Mountain Power has an interesting pilot program where it leases home battery systems to customers at a subsidized rate in return for the right to use that battery for both utility upgrade deferral and load shifting so long as it keeps enough charge in the battery to assure the customer that they will have protection from a power outage.  Battery system owners can also enroll in the program in exchange for an upfront payment of up to $9,500.  A payment that large could easily influence a homeowner to prefer a battery backup system over a generator.

I expect similar programs to proliferate around the country as utilities and their regulators become more familiar with the benefits batteries can deliver to the grid.

…And It Also Provides Backup Power

An even larger potential disruptor for the generator market is devices that consumers buy for other reasons, but which can also provide power in a blackout.  A prime example of this is the Ford (F) F-150 Lightning: an all-electric pickup truck which can also power your home with the right electrical upgrades.  Electric cars from Nissan and VW are expected to have similar capabilities soon.

The F-150 is only the most prominent example of battery powered vehicles, devices, and appliances that can also deliver backup power.  Many other electric and plug-in hybrid electric vehicles come equipped with standard 120V outlets, while the Kia EV6 has an adapter which turns the charging port into a functional 120V outlet.  Even if an electric or hybrid vehicle does not come with a 120V outlet, an inverter costing $300 or less plugged into the cigarette lighter or attached to the car’s traditional 12 volt battery can serve much the same purpose.  This ability of an electric or hybrid vehicle to power one or more standard outlets is referred to as “Vehicle to Load” while the F-150 Lightning’s ability to replace a home generator is often called “Vehicle to Home.”

While Vehicle to Load cannot replace the utility of a whole home generator, it can easily replace the functionality of smaller gas and diesel generators.  Homeowners who already have electric cars that can power their refrigerator and charge their electronics will also be less likely to spend thousands of dollars on a generator to power their whole home during infrequent outages.

Nor are cars the only devices that can provide incidental power backup.  Owners of Ego battery lawnmowers, snowblowers, and other devices can buy the Ego Nexus Power Station which uses the batteries from those devices to provide all the functionality of a gasoline or diesel generator that can be used indoors. 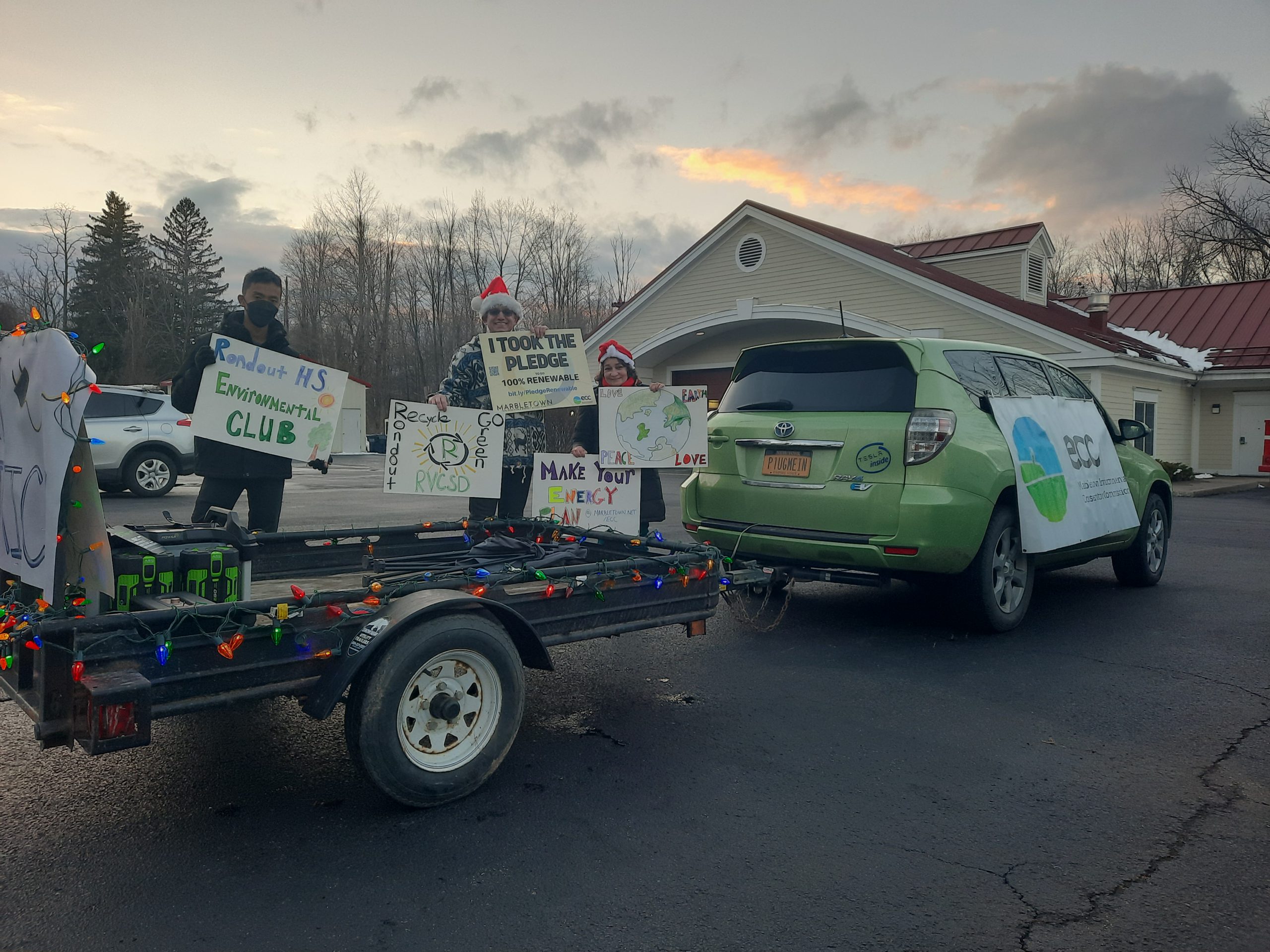 Photo: The author and other members of the Marbletown Environmental Conservation Commission and Rondout Valley High School Environmental Club with their all electric entry in a holiday parade. The trailer is being towed by a 2012 Toyota RAV4 EV and the lights and music on the trailer are powered by a Ego Nexus Power station.  Other entries trailers in the parade have lights powered by gas or diesel generators.

Another potential development is the including of batteries in home appliances that have not previously had them.  These Energy Storage Equipped (ESE or “Easy”) Appliances also provide incidental power backup.  The main purpose of the batteries is to enable efficient electric appliances like induction stoves and heat pump water heaters to replace their gas counterparts without expensive electrical upgrades.  The batteries allow them to deliver high power performance (like an induction stove’s unmatched ability to boil a large pot of water in minutes) while plugging in to a typical low-power electric outlet.  The extra cost of the battery is offset by lower installation cost and the new investment tax credit for battery storage, effectively delivering a device that not only delivers high performance cooking at no extra cost, but also provides an external outlet which can power your fridge and other critical loads during a power outage.

While neither the Nexus Power Station nor an ESE appliance can deliver the full performance of a home generator, if someone gets one because they need a new stove or snowblower, they will probably be less willing to pay thousands of dollars for a home generator.

While the market for reliable home power is expanding, companies that sell home generators seem  likely to benefit only in the short term.  Longer term, increasingly ubiquitous electric and hybrid electric vehicles with Vehicle to Home and Vehicle to Load capability, along with Energy Storage Equipped (ESE) appliances and utility programs that subsidize (or give away) home battery storage will disrupt the market for generators in a way with which they cannot compete.

How will a home generator installer persuade a customer to spend many thousands of dollars on a home generator when they already have most of the resiliency benefits it can supply for much lower cost, or even for free as an extra feature of an appliance they would have bought anyway?

A few people still buy high-end digital cameras for the capabilities that a cell phone can’t yet emulate, but those people (and those capabilities) are becoming fewer and fewer.  Ten years from now, we’ll be saying the same things about home generators’ capabilities and home generator buyers..

DISCLOSURE: No positions in companies mentioned in this article.