In my second quarter update I deleted China Ritar Power (CRTP.PK) from my energy storage tracking list because of its decision to terminate its SEC registration during a period when China-based companies with US listings were bogged down in a dense fog of suspicion. Since then the carnage in the energy storage sector has been far worse than I expected and it’s time to permanently remove the companies highlighted in pink from my energy storage and vehicle electrification tracking list for the reasons described below. 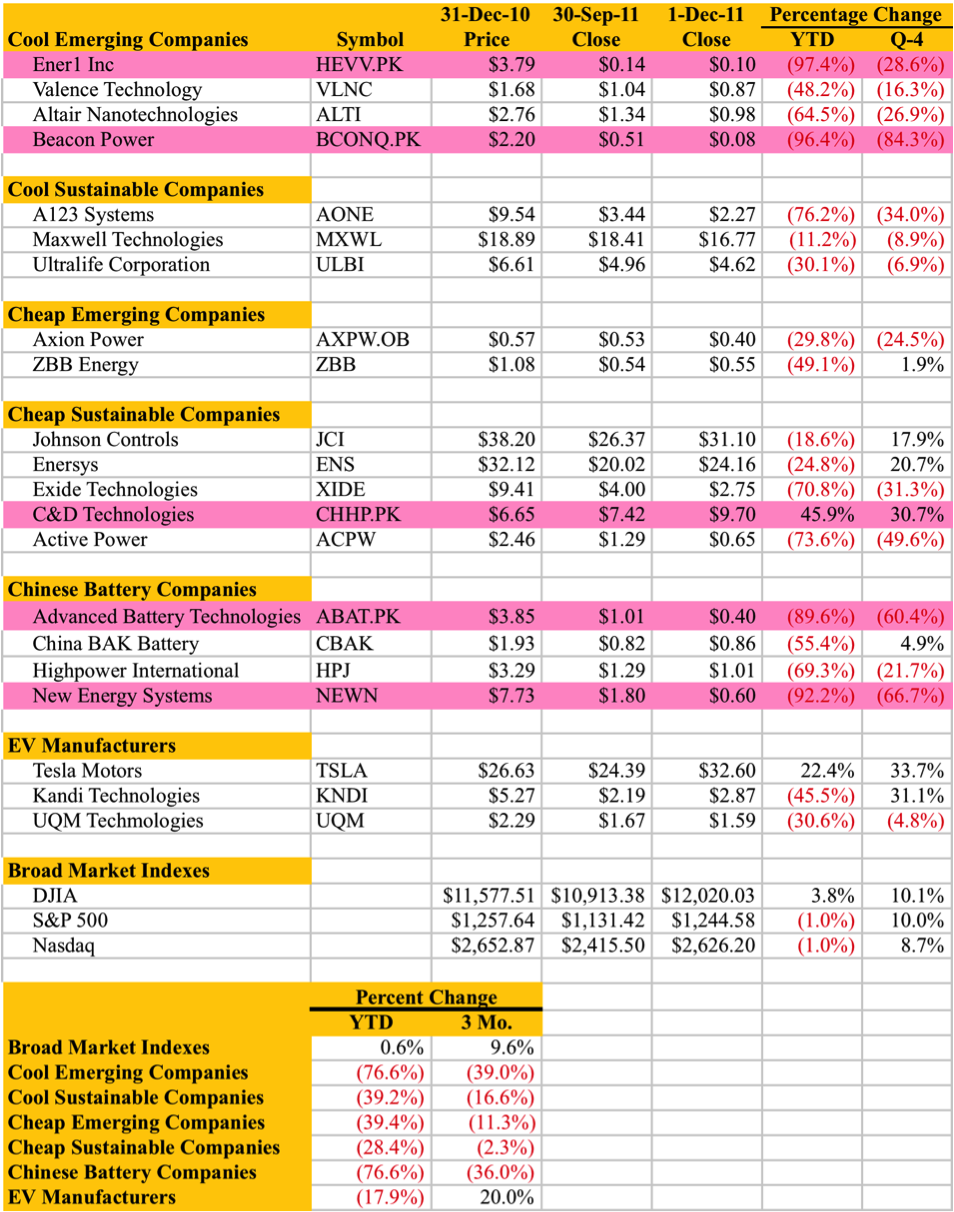 In March of this year when its stock was trading in the low $3 range, I predicted that Ener1 (HEVV.PK) would be forced to come to grips with an improvident investment in Th!nk Motors and a pair of mushy balance sheet accounts including $11.7 million of intangible assets and $51.7 million of goodwill. Since then the collapse of Ener1’s stock price has been catastrophic as it wrote off the Th!nk investment and said that it would impair the bulk of its goodwill and intangible assets. When I adjust Ener1’s last reported balance sheet amounts for known write-offs and likely intervening operating losses, it’s clear to me that stockholders equity has been completely wiped out and while Ener1’s creditors may recover some portion of their investment, the holders of 197 million outstanding common shares own an empty bag.

Earlier this year I was hopeful that Beacon Power (BCONQ.PK) would gain enough momentum from the commissioning of their Stephentown frequency regulation facility and a favorable FERC ruling to keep the company afloat long enough to prove the technical and economic merit of their high-speed flywheel technology. Unfortunately, management concluded that bankruptcy reorganization was the only option and filed on October 31st. Beacon subsequently agreed to sell the Stephentown facility for the benefit of its principal creditor, the US Department of Energy. The impairments included in their Form 10-Q for the period ended September 30, 2011 were savage and like Ener1, Beacon’s stockholders equity has been completely wiped out, leaving the holders of 32.2 million outstanding common shares with an empty bag.

C&D Technologies (CHHP.PK) has been a problem stock since the fall of 2010 when it unexpectedly took a $46 million impairment charge that resulted in a forced restructuring of the company’s debt. While it appeared that the reorganized C&D would continue to operate as a public company, it announced in October that its principal stockholder would buy all remaining shares for cash at a price of $9.75 per share during the fourth quarter. Accordingly, the company is no longer of interest to me.

In March of this year several articles on Seeking Alpha challenged the accuracy of SEC reports filed by Advanced Battery Technologies (ABAT.PK) and while much of the criticisms seemed to be based on innuendo and conjecture, there were some questions that concerned me enough to back away from my prior support of the company. I wasn’t troubled much by ABAT’s aloof response to the accusations but I became concerned when a wholly-owned subsidiary needed a $6.3 million line of credit while the parent reportedly had cash balances in $75 million range. The subsequent abrupt departure of their CFO set off alarm bells. On Monday the company’s chairman told shareholders that ABAT was unwilling to comply with the Nasdaq Stock Market’s request for formal confirmations prepared by its banks in the presence of its auditors because the procedure was degrading. I understand the importance of “face” in Asian culture, but I can’t condone, understand or abide by an abject refusal to provide bank confirmations to a stock exchange when the price of refusal is delisting. It may all be a grand xenophobic conspiracy as ABAT’s chairman claims, but I’m not willing to assume that risk.

The final cull is the result of a surprise announcement this week that New Energy Systems (NEWN) had agreed to sell its two battery manufacturing subsidiaries to employees. It will apparently retain a consumer battery design and marketing operation as well as a solar panel business, but it will no longer manufacture batteries or components. Accordingly, the company is no longer of interest to me.
Overvalued Stock Watch List

I remain very concerned with the viability of Valence Technology (VLNC) which has been surviving from hand to mouth on open market sales of securities and loans from a principal stockholder for years. In its last Form 10-Q Valence reported a negative stockholders equity of $56.8 million, which means its current market capitalization of $146.1 million represents a whopping $203 million premium to book value. As a native English speaker who lives in a French speaking country, I know all about relying on the kindness of strangers. It may work as a lifestyle, but I’ve never seen it work as an investment philosophy. Unless and until Valence eliminates the Sword of Damocles threat of $66.7 million in related party debt, I think the stock is too risky to own.

While Tesla Motors (TSLA) is not facing an imminent threat, its working capital adequacy is troubling if you’re willing to consider possibility idea that it might encounter an unanticipated delay or two with the launch of its Model S or maybe even fall short of ambitious sales targets for 2013. At yesterday’s close Tesla’s market capitalization was a stunning $3.4 billion, an amount that’s 11.6 times its September 30th book value of $294 million. When world class companies like Bernstein Research and Ricardo agree that electric vehicles will not be a credible market force until 2025 but almost all analysts and talking heads are gushing over Tesla’s prospects, it’s a sure sign that a stock has reached the Peak of Inflated Expectations which is inevitably followed by an eye watering descent into the Trough of Disillusionment. I will be first to congratulate Tesla if they pull off an Exodus-class miracle and meet current expectations, but I’ve seen far too many cases where the herd went careening over Wall Street’s buffalo jump to believe a happy ending is likely. After all, how many other vehicles can proudly bear the following truth in advertising sticker?