The continuing market rebound in the face of a worsening epidemic in the US (outside of the initially hardest hit states) widespread protests against lack of police accountability, and a President who thinks the right response to mostly peaceful protests is to call in the military continues to befuddle me.

The risks in today’s stock market outweigh the possibility of future potential gains.  Although I was buying aggressively in March, I’ve shifted back to a more cautious stance, and am mostly starting to sell covered calls on my positions with the greatest gains.  I generally prefer international names to domestic ones at this point given the worsening situation in the US, but mostly I’m just waiting and preparing for the market to fall again.

Below are three updates on the individual stocks in the model portfolio which I wrote for my Patreon supporters in the last week:

Spanish electric transmission utility Red Eléctrica reported first quarter results on April 29th.  At that point, it did not anticipate significant short term impact from the pandemic on its financial results.  It has yet to assess any long term effects.

The company is in a strong financial position, with approximately 3 billion euros of cash on hand and available credit, with less than 2 billion euros in debt maturing through the end of 2020.  Shareholders approved an annual dividend of EUR 1.0519, EUR 0.2727 of which was distributed to shareholders in January and EUR 0.7792 to be distributed on July 1st.

Profit was down approximately 9% from the first quarter in 2019 largely due to higher interest and depreciation due to recent acquisitions, without which revenue would have fallen about 8%.  The decline in profitability was anticipated and largely due to an adverse regulatory change which reduced Red Eléctrica’s operations and maintenance revenues.  Since this decrease in profitability of operations was anticipated, so it did not lead to a decline in the share price… the share price decline from the change in regulation took place in 2019.

This change will continue to affect  Red Eléctrica’s profits for the rest of the year, possibly somewhat offset by recent acquisitions, but because of this we should expect distributions in 2021 (which will be based on 2020 profits) to be down a little from this year’s.  But even with a slightly lowered distribution, we can still expect a 5.5% to 6% yield based on the current 18 euro share price.

REE remains a solid income stock and relative safe haven in what I anticipate to be a period of continued volatility.

Ebay (EBAY): Timing Was Everything

Ebay Inc. (EBAY), reported strong volume growth and raised their second quarter guidance today (June 6th).  Readers of my April 10th article on the stock may have been surprised by the size and speed of the turnaround, but not that it happened.

In the month and a half since I added an EBAY put option to the Ten Clean Energy Stocks model portfolio, my only regret on this call has been not to buy the stock outright.  If you missed the narrow window after my call (when EBAY briefly traded below $30) and the subsequent launch into orbit today, and are wrestling with that regret, take a moment to re-read last month’s article “Woulda, Coulda, Shoulda” which I was motivated to write based on my own regret at not just buying the stock instead of selling puts at the time.

Now that the market is recognizing the potential of Ebay in the era of social distancing, I’m no longer a buyer.  The stock could continue to have a momentum-fueled run, but, as a value investor, I will be looking for the next ridiculously cheap stock, and maintaining my short put positions (strike prices ranging from $26 to $35) until they expire.  They look unlikely to be assigned at this point.

Leading Bus manufacturer NFI Group, Inc. (NFI.TO, NFYEF) announced earnings at the start of May.  The headline was a $51 million write-down of its 2015 investment in the MCI motor coach business.

While NFI’s main business is transit buses, where it sells to transit authorities which have a multi-year sales cycle and long lead times, its motor coach (long distance bus) customers are private operators who are much more sensitive to current ridership.  The pandemic has caused ridership for both transit agencies and intercity coaches to fall precipitously.  While transit operators have already received some federal support in this crisis, coach operators will probably receive less than the similarly-impacted airline industry.

Even with reopening, I expect that coach ridership will remain down until we have a vaccine for Covid-19, and we will likely see at least one additional write-down of the value of MCI from New Flyer.

Aside from MCI, however, first quarter results were strong, with a year-over-year increase in deliveries, a strong order book from transit agencies, and New Flyer beginning a phased restart of production on a facility-by-facility basis.  The company is in a relatively strong financial position, and is conserving cash through hiring freezes, the suspension of executive bonuses, and delays in planned capital expenditures. 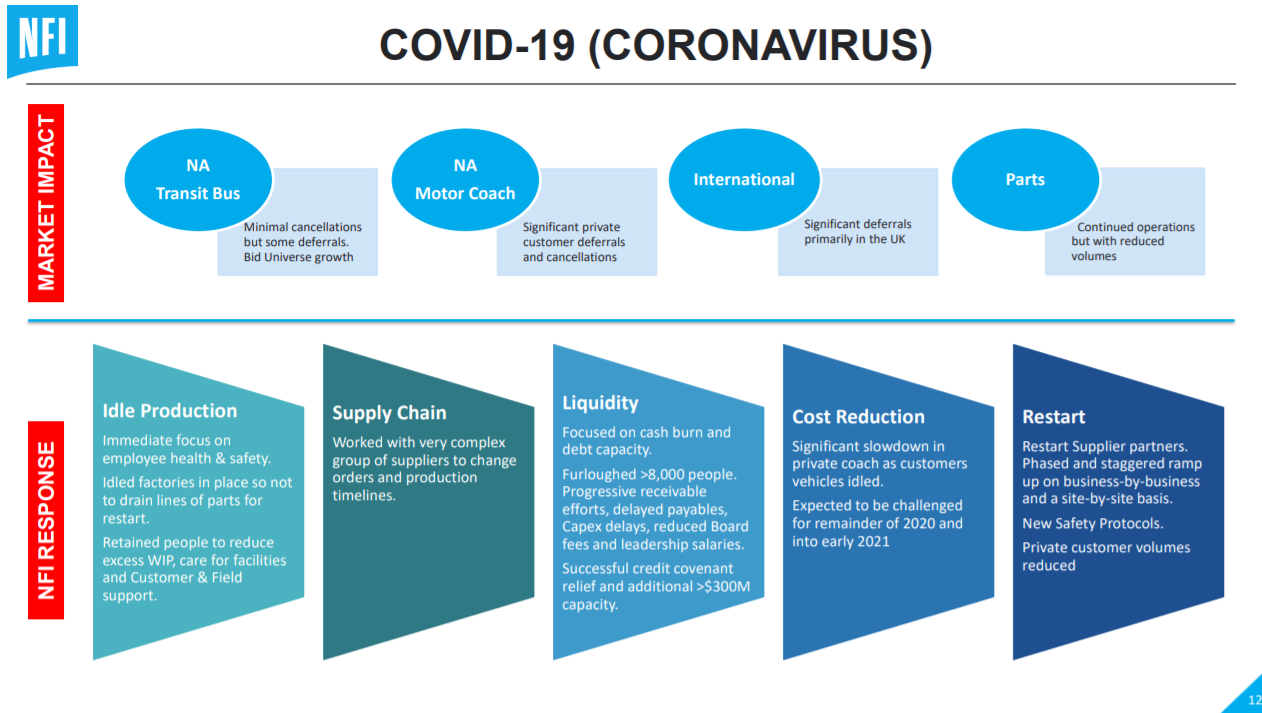 With past and planned stimulus from governments around the world likely to boost transit agency spending, New Flyer’s transit bus business seems likely to do well in the medium term.

For the longer term, New Flyer’s transit and motor coach customers will both need widespread vaccination of the population for ridership to return to normal.  I don’t expect that before mid-2021.  New Flyer investors should expect a bumpy road ahead for at least another year.  As the stock continues to recover, I am looking for an inviting looking stop where I might disembark.