Leading waste-to-energy operator Covanta’s stock has been the second best performing holding in my 10 Clean Energy Stocks for 2019 model portfolio.  While in many ways the company is similar to the clean energy Yieldcos that dominate the model portfolio, it is different in that it develops its own projects, while most Yieldcos depend on a sponsor to develop projects which they buy at close to market prices.

A normal Yieldco depends on a strong share price or cheap debt financing to maintain its dividend per share growth.  Without cheap equity or debt financing, a Yieldco can grow in size, but the equity dilution or the cost of the financing prevent much of the new cash flow from flowing through to dividends. 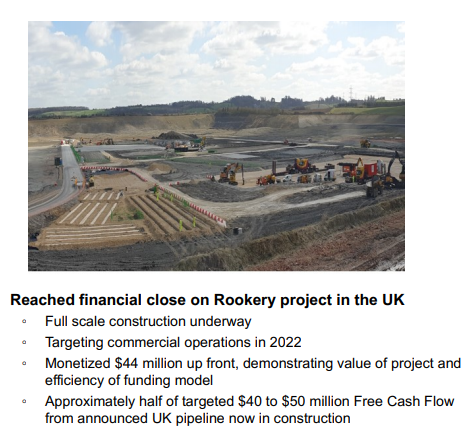 The growth potential of this strategy was on display in the company’s first quarter earnings call when management outlined the financial requirements of it’s Rookery Project in the UK, which it is developing with financial contributions of Green Investment Group (GIG) and Veolia (VEOEF, VEOEY, VIE.PA).  The project reached financial close in March and is expected to process around 545,000 metric tons of waste annually.

The Rookery Project has begun construction and is expected to begin commercial operations in 2022.  Once complete, Covanta will operate the plant under a long term contract, while Veolia will supply the majority of the waste.  Covanta and GIG will each own 40% of the project, while Veolia will own the remaining 20%.

Rather than having to pay money up-front, the terms of the partnership allowed Covanta to receive $44 million when the project reached financial close. This can be used to help fund Covanta’s future capital commitments during construction.  Covanta’s share of total construction costs will be £60 million or US$80 million.  The $44 million received at financial close was part a recovery of Covanta’s development costs to date plus premiums for the work done so far and GIG’s right to invest in the project based on anticipated future returns.

The company is also benefiting from a strong waste market, which allowed it to increase its tipping fees by five percent (year over year) in the first quarter.

It is no wonder then that Covanta’s stock, which had been trading at a Yieldco-like yield of 7.4% at the end of 2018 has risen 33% since then, and jumped by over 3% when earnings were announced. 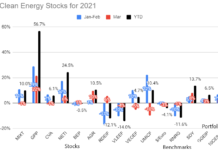 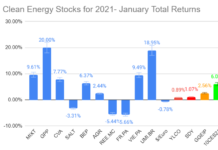 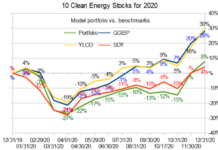