The chart of spot uranium prices presents a dismal picture for this key energy commodity. After a brief spike in early 2006, the spot price has been in a long-term slide down hill. In the last year and a half it appears the price as found a level of support at the $20.00 price level as the shares have bounced around between that support level and up to the high 20s. With each bound higher shareholders of uranium producers cheer the end of what has been a long ‘down’ cycle. A click up to US$27.50 in recent days has sent uranium company shares higher.

The price chart also shows that there have been two attempts at recovery in the past, one in 2011 and another in early 2015. What makes shareholders think this year is different?

The future of the uranium industry may not be told by the uranium spot price chart at all. Most uranium is purchased by electric power producers through long-term contracts at specified prices. However, in recent years, utilities have been dipping into inventories built up over the years and buying at spot prices to take advantage of the lowest prices in a decade. Those inventories are running low and when gone entirely, the nuclear power producers will have to pick up the phone and call uranium producers.
Those phone calls could be like a soft spring breeze for an industry that has been in hibernation through a long, cold cycle. Likely there will be immediate impact on pricing that will reverberate around the world to small producers based in the U.S. such as Westwater Resources (WRR: Nasdaq) and major producers such as KazAtomProm JSC in Kazakhstan. Many uranium producers have idled operations like Westwaters’ Texas in situ uranium sites or KazAtomProm’s December 2017 decision to cut uranium production by 20%. Altogether uranium producers cut production by 30 million pounds per year beginning in 2016, a significant amount given annual consumption is near 150 million to 160 million points per year. 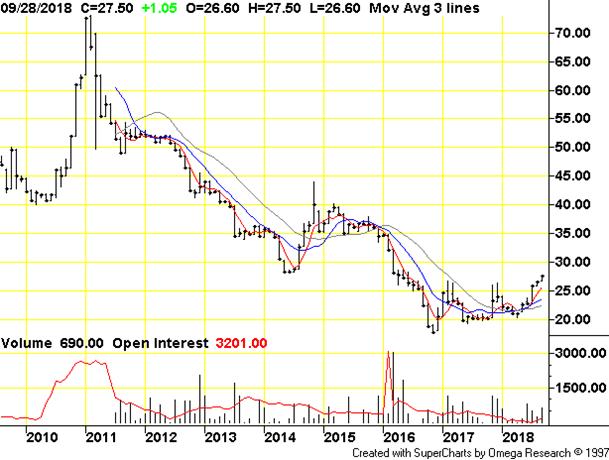 Cameco Corporation (CCJ: NYSE) provides a good illustration of how inventories could finally be soaked up. Cameco made it clear in the beginning of 2018, that it would be a frequent visitor to the uranium spot market to help fulfill contractual commitments. Like so many others Cameco shut down its McArthur River operation, removing 18 million pounds from the market in 2018, leaving expected Cameco production at around 20 million pounds. As a consequence, Cameco said it would turn to the spot market to source enough uranium to fulfill contracts that are expected in a range of 28 million to 30 million pounds in 2018.
With a major producer like Cameco present at an unprecedented level, the supply-demand dynamic in the spot market could be realigned. Cameco has been expected to purchase as many as 10 million pounds in 2018. While inventories had been ample over the past few years, the industry watchdog UxC reports inventories in the global spot market have been trimmed to about 20 million pounds in mid 2018.
If all predictions regarding Cameco come to pass, the point is nigh at which the uranium pantry has reached that precariously low point that alarms nuclear power producers. The uranium spot price chart may not provide a good prediction of the industry’s turnaround, but inventory levels may be the spot-on predictor of the future.
Given marginal costs at its Texas operations, Westwater Resources is watching for U3O8 prices well over $35.00 per pound. The company will need about a year preparation to resume production. As sluggish as this response might seem, it will be typical of all uranium companies that have suspended production.
Smaller producers like Westwater might be expected to participate in a uranium industry recovery. Inventory capitulation may trigger the industry’s turnaround, but it will be other developments that sustain a long-term advance for the industry. On the demand side, Japan’s utilities have implemented more rigorous safety inspection protocols for nuclear power production sites, restarting nine reactors. Japan’s Fukushima disaster in early 2011 was a seminal event in the nuclear power industry, so the country’s return to nuclear power is expected to have a strong influence on policy decisions in other countries. As 2018 began, there were 57 reactors under construction around the world. Since a typical 1,000 megawatt nuclear power reactor needs about 25 metric tons of enriched uranium each year, these reactors could have a significant impact on future demand for uranium.

This article was first published on the Small Cap Strategist weblog on 9/25/18 as “Spot On: Uranium Inventories.”