Graphite is the most widely used material for battery anodes.  The anode is the positively charged electron collector in a battery.  It collects and accelerates the electronics emitted by the battery’s cathode.  Graphite gets the anode job because it is has excellent electric conductivity and resists heat and corrosion.  Plus it is light weight, soft and malleable.

As satisfied as manufacturers might be with graphite anodes, none would balk at an alternative material that boosts battery performance or reduces cost.  Scientists believe battery capacity can be increased as much as ten times by using silicon for anodes.  It requires six atoms of carbon to bind one single atom of lithium. Theoretically silicon can bind four atoms of lithium at the same time.    Add to that feat low cost and abundant supply, it is not surprising the largest battery manufacturers are looking closely at silicon as an anode material. 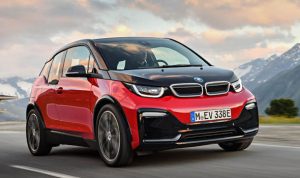 Automotive manufacturer Bayerische Motoren Werke (BMW:  DE) may be the first to incorporate a silicon-based anode into a battery for its electric vehicles.  BMW hybrids slated for introduction in 2023, will have be equipped with battery packs that have silicon-based anodes.  The luxury car maker has tapped Sila Nanotechnology to fix silicon’s flaw  –  swelling and pulverization during the battery charging cycle.  Sila’s ‘packaging’ approach appears to offer a work around, making it possible to build a silicon-dominant anode. 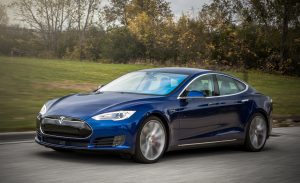 Model S fans may cry foul at BMW’s first place claim, arguing that Tesla (TSLA:  Nasdaq) has had advanced anodes in its premium cars for several years.  True enough in 2015, Tesla announced an update to its Model S power pack that included faster acceleration performance, much of which was delivered through the use of higher energy density battery cells.  Tesla’s Model 3 battery cost about $200 per kilowatt hour, well below prevailing costs.   The boost in performance was enough to win over 300,000 pre-orders the first week.

The anodes in Tesla’s 90 kilowatt hour battery pack supplied by Panasonic (PCRFY:  OTCMKT, 6752:  Tokyo) are laced with silicon.  The enhancement creates a 30% increase in energy density with implications for battery cost and form factor.  Yet the silicon content in the Tesla battery anode is less than 10%, leaving the anode graphite-dominant with just enough silicon to tweak performance. 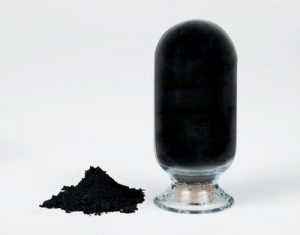 As successful as Panasonic’s battery pack has been for Tesla, its contribution to enhanced performance has 3M Corporation (MMM:  NYSE) has also taken a run at silicon anodes.  3M began accumulating patents as early as 2012, claiming 40% increase in cell density with its silicon alloy composed of silicon, iron and aluminum.  In 2015, 3M acquired privately-held Nanoscale Components, which had developed a pre-lithiation technology that involves putting extra lithium in the anode.  Apparently, Nanoscale’s patented process helps extend cycle times, overcoming one of silicon’s shortcomings while retaining its capacity benefits.  3M estimated its anode alloy materials could lead to a 20% reduction in required battery volume through greater battery energy density.

A stake in Panasonic encompasses a broad portfolio of consumer and business electronics.  In the twelve months ending June 2018, the company reported $73.8 billion in total sales, providing $2.2 billion in net income or $0.95 per share. During that period operations generated $3.5 billion in cash, demonstrating that Panasonic is a cash generative business.  The sales-to-cash conversion rate was 4.7% in that twelve month period.  At the end of June 2018, the company had $11.8 billion in cash on the balance sheet  –  enough to completely pay off outstanding debt of $11.7 billion.

The pile of cash also makes it possible for Panasonic to maintain a generous dividend payout policy near 28% of net income.  The current forward dividend yield of 2.2% might be tempting for income hungry investors.  The shares are trading at 10.8 times the consensus earnings estimate for 2018.  The multiple appears compelling compared to the broader consumer and office electronics sector, which is valued near 16.0 times forward earnings.

3M shares are a bit more expensive at 18.3 times the consensus estimate.  That is at least partially explained by the fact that from the standpoint of fundamental measures 3M is the better of Panasonic. 3M delivered a 21% operating profit margin on $32.8 billion in sales in the last twelve months.  This compares to an operating profit margin of 5.0% for Panasonic.  Return on equity and return on assets were 40.1% and 12.2%, respectively.  Panasonic is a laggard with 14.1% ROE and 4.0% ROA.

Recent earnings at 3M have grown 17.3% year-over-year, helping to justify the current MMM valuation.  The company has its own ample dividend payout, which is expected to total $5.44 in 2018.  This translates to a forward dividend yield of $2.7%.

Of course, 3M and Panasonic have accomplished enhancement of a graphite-dominant anode with the addition of silicon alloy.  This is a plus for their battery customers in the near-term, but far short of the objective of a silicon-dominant anode pursued by Sila Technologies and the other eight developers listed in the post “Better Battery.”  This group, which is by no means exhaustive, represents a significant competitive threat to the major battery manufacturers.  Notice it was Sila that won the order from BMW and not a major automotive battery manufacturer.  We expect some to solve the problem with strategic acquisitions.

A123 Energy Solutions, which is a subsidiary of NEC in Japan, has moved on from a troubled past to become a top battery manufacturers in the world. The company has jump started its own silicon-based anode development with the acquisition of Leyden Energy in June 2014.  Leydon has had multiple research and development projects underway based on patented technology acquired from Dupont.  Leyden scientists, some of whom were transferred to A123’s research and development team, has made progress with electrolytes that are compatible with high energy density materials such as silicon anodes.

Terms of the Leyden deal were not disclosed.  If A123 is able to bring a competitive battery to the market that will win contracts with automotive manufacturers, no doubt they will consider it a bargain.  The deal could serve as an incentive for smaller companies to forge partnerships or larger companies to find a tech savvy developer.  Change is afoot in the battery industry and there appears to be opportunity for investors of all risk profiles.