Richard Rhodes has written an amazing book. He aspired to tell the tales of energy transitions over the past 400 years. His Energy: A Human History accomplishes that task. 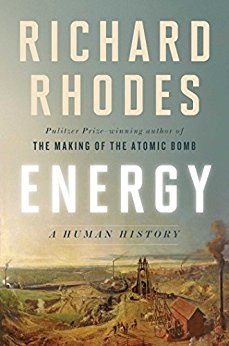 The book is daunting in size for non-required reading. It is filled with brief stories of this or that device or discovery or development, and almost overwhelming in both scope and detail. I wondered, at times, when the payoff would come.

My advice: If you are at all interested in the topic, stick with it.

To my economics-trained mind the book lacks analytical structure. One story after another, linked together by fuel source or technology, layer on layer. Only slowly do deeper themes emerge. The “great man” history of invention gets much needed texture, as we learn about the multitude of small advances necessary for the big advance of, say, James Watt and his steam engine. We also get the social context, including mention of legal, political, and economic changes that accompanied and in some cases made possible technological changes.

The social context includes several tales of resistance to change from established interests, and these aspects make the book useful to those interested in political economy. For example, opposition to the development of the steam engine arose naturally from taxi and carriage services. Owners of the canal between Liverpool and Manchester were strongly opposed to the building of a railroad between the cities, spearheaded in 1825 by George Stephenson.

‘By then, Stephenson was working on the next important railway under development in England: the Liverpool & Manchester. Unlike the Stockton & Darlington, which had won through the parliamentary authorization process with little difficulty, the Liverpool & Manchester encountered fierce resistance from canal owners, stagecoach operators, turnpike trusts, and innkeepers who had come to understand that railway competition was likely to be fatal to their businesses and investments. Nor did the landed gentry whose wayleave the new railway needed to acquire want any part of so noisy and smoky a fire hazard. …

‘George Stephenson faced further harassment when he surveyed the course for the Liverpool & Manchester. He and his men had “sad work with Lord Derby, Lord Sefton, and Bradshaw the great Canal Proprietor,” he wrote his business manager. They had blockaded their grounds on every side, he complained, to bar the surveying from going forward. Worse, “Bradshaw fires guns through his ground in the course of the night to prevent the Surveyors coming on in the dark.” The railway was determined to force a survey through, he added, even though Lord Sefton warned them he’d have a hundred men out on his grounds to prevent them. Stephenson would testify to Parliament that he was “threatened to be ducked in the pond if I proceeded.” He managed only a hasty survey, “by stealth, at the time when the persons were at dinner.” ‘[Endnotes omitted.]

The hasty survey would cause Stephenson trouble in Parliament, as a barrister was able to point out several flaws and force embarrassing admissions from the railway developer. The necessary bill failed Parliament that year. The bill passed later after route adjustments and a gift of railway stock to a canal owner, among other considerations.

Similar small stories cover the history of energy technology from the scarcity of wood in Elizabethan England–wood was so scarce at the time the partners of Wm. Shakespeare dismantled and moved their theater after a dispute with the landlord rather than try to build with fresh lumber–to Edwin Drake’s first oil well near Titusville, Pennsylvania, to coal-fired electricity and then nuclear energy.

The book is broad in scope, filled with detail, and (with some persistence) rewarding.

Michael Giberson teaches Economics and Energy Policy at Texas Tech University’s Rawls College of Business. This post is a revised version of an article that first appeared at the Knowledge Problem blog.