May was a tough month for most clean energy stocks, even though the broad market was up slightly, but my Ten Clean Energy Stocks for 2016 model portfolio continued to out-perform, mostly because of strong earnings for several stocks.  The model portfolio was up 3.1% for the month and 3.8% for the year to date, even though its clean energy benchmark fell 2.0%, for a decline of 2.8% for the year through May 31st.  The broad market of small cap stocks also rose, and was up 2.2% for a total gain of 2.4% for the year to date.

Clean energy income stocks continue to outperform growth stocks. with my income benchmark, YLCO down only 0.7% for the month compared to a 5.1% decline for my growth benchmark, PBW.  The seven income stocks in the model portfolio posted modest gains of 1.2%, comfortably ahead of their benchmarks decline, but were put to shame by the stellar performance of the three growth stocks, which advanced 7.6%.  The Green Global Equity Income Portfolio (GGEIP), an income-oriented clean energy strategy which I manage, continued to out-perform as well.  It rose 0.8% for the month, and is up 8.8% for the year to date.

At its first quarter conference call, wind Yieldco Pattern Energy increased its dividend from $0.371 to $0.39.  The 2.4% increase was the ninth consecutive quarterly increase since its IPO.  Wind speeds were lower than average at its farms in the first quarter because of El Nino, but they have a good chance of being higher than average towards the end of 2016.

The company has $100 to $150 million in liquidity to acquire additional projects, and has also put in an “At The Market” (ATM) facility to raise small amounts of additional equity if the stock price continues to recover (which it has since the announcement.)  This is part a growing trend of Yieldcos returning to the capital markets which I believe signals a return to normalcy.  I took an in-depth look at this trend here.

Wood pellet focused Master Limited Partnership (MLP) and Yieldco Enviva Partners raised its quarterly dividend from $0.46 to $0.51 per share, keeping it on track to meet its 2016 distribution guidance of $2.10 per unit for 2016.  That guidance would require $1.13 in distributions in the second half of the year, which could be accomplished with smaller increases of only 4 cents in each quarter.  I think it’s likely that they will continue with larger increases of 5 or 6 cents and exceed the guidance.  The guidance does not include the effects of further acquisitions, which are looking increasingly likely as the stock price recovers.

The demand for wood pellets remains strong and growing.  Enviva’s position as the industry leader allows it to continue to sign take-or-pay contracts with quality utility customers for its entire capacity.  One such potential contract was discussed on the quarterly conference call with the final deal announced on June 2nd.  Enviva will supply 800,000 metric tons of wood pellets per year until 2027 to a power plant in the UK.  The plant formerly generated power from coal, but is being converted to run on wood pellets in order to reduce net carbon emissions.

Ethanol production Yieldco Green Plains Partners continues to recover along with gas prices, but the partnerships earnings are not as closely linked to gas prices as is the price of ethanol.  It’s contracts with its parent, Green Plains (GPRE) insulate it from the ethanol market, so a continued recovery does not depend on continued increases in oil.

While its parent operated at a loss in the first quarter, the partnership was able to increase its quarterly distribution to $0.405 per unit while maintaining a coverage ratio of 102%.

Its parent, Green Plains, rallied strongly in May as projections for ethanol demand and margins have improved.  The improved market conditions are helping GPP’s units as well, but I believe the units remain very attractively valued.

Yieldco NRG Yield (NYLD and NYLD/A) also reiterated its dividend growth target of 15% year over year, which I expect will mean total dividends for 2016 of 94 or 95 cents.  Its May dividend of $0.23 was precisely 15% above the dividend of a year earlier.

The company is also making progress developing internal management, and appointed Chris Sotos as CEO.  Sotos was formerly Head of Strategy and Mergers and Acquisitions at NYLD’s parent, NRG Energy (NRG), but will now be employed solely by NRG Yield.

Information on Yieldco Terraform Global remains scarce as the company attempts to file its 2015 annual report and first quarter 2016 reports and its former sponsor, SunEdison (SUNE), stumbles through bankruptcy.

The delay of the reports is due to the fact that Terraform Global relied on its parent for accounting and bookkeeping, and the parent’s financial controls were inadequate.  Now the Yieldco needs to rebuild everything from scratch.  The company has delayed its second quarter dividend, which I do not expect to be paid until after its financial reports are filed and it can claim to understand its own financial position.  At that point, I expect the regular dividend to be cut dramatically, with the second quarter dividend paid in arrears.

For me, the bottom line on Terraform Global is that there is much we don’t know, but if we focus on the big picture and the little we do know, we have a stock trading far below its fair value because of all the uncertainty.  Eventually we’ll have a better picture of GLBL’s financials, and the stock market seems to be valuing it below the worst case scenario.

Clean energy financier and REIT Hannon Armstrong had a very strong first quarter, with core earnings of $0.32 per share, a 19% increase on the previous year, and already in excess of the $0.30 quarterly dividend.  My previous estimate for the next dividend increase in December was 4 cents, to $0.34, but after this strong quarter, I expect the new dividend will be $0.35 or $0.36.

Like Pattern discussed above, Hannon Armstrong has put an ATM facility in place, and has said that it may raise something less than $200 million in new equity this way.  The difference between core earnings and the dividend will also flow back into new investments, all of which should contribute to per share earnings growth.

Canadian listed Yieldco TransAlta Renewables also had a strong first quarter, and continues on-schedule and on budget with its South Hedland Project in Australia.  The company has signaled that it will further increase its dividend when the project is complete in mid-2017.

The company also secured financing on its 68.7MW New Richmond wind facility which it will use to finance other projects, most likely including South Hedland.

Advanced biofuel producer Renewable Energy Group also reported a strong quarter.  The company sold 64% more gallons of biomass based diesel than during the same period a year ago, although spreads were thin due to high commodity prices. They have also been making significant progress expanding their business through both internal growth ans acquisitions.  I expect these investments to show large benefits as the advanced biofuel and biodiesel markets recover due to the new climate of regulatory certainty.

At the end of the month, REGI sold $125 million of convertible notes due in 2036, with the proceeds to be used to redeem similar notes which would have matured in 2019, as well as for stock buybacks.  This caused the market to irrationally sell off for about a week or so, but it should have a positive effect on the share price in the long term.  I took the opportunity of the selloff to add to my position.

Software as a service fleet management provider MiX Telematics shot up on the news that the company would be buying back about 25% of its shares at R2.36 per share using cash on hand.  This should result directly in increased earning per share (EPS) of approximately 30%.  After the sale is finalized and the effect starts boosting EPS, I expect the stock to continue its upward trajectory.

Operationally, the first quarter was also solid and exceeded market expectations, with year over year subscription growth of 11% despite many of the company’s customers in the oil and gas industry reducing the size of their fleets.  I remain extremely bullish about the company’s long term prospects.

Energy service contractor Ameresco reported a strong first quarter, with revenue up 16% and rising margins.  The improvement was driven mostly by Federal government projects, while sales of integrated PV solar systems continued to lag.  The latter was due to the weakness in oil and gas, since many of these customers are in that sector.

Last month, I wrote that I was beginning to question my faith in company management.  This quarter has helped, but I’d like to see a few more quarters of strong
execution before I put my doubts completely to rest.

The first quarter was almost uniformly good for my stock picks.  I continue to think Green Plains Partners and Terraform Global are two of the best values, but recent news has me adding Renewable Energy Group and MiX Telematics to the mix.

Although MIXT stock was up 23% for the month, it remains greatly undervalued, especially in light of the expected 30% per share EPS increase due to the stock buyback.  As for REGI, I’ve been growing more confident that this stock is set for explosive earnings growth this year and next. 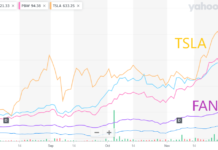 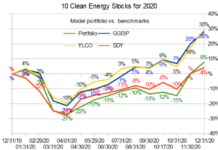 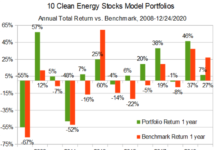 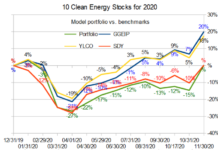