The poster child of energy efficiency has long been changing a light bulb.  First, it was swapping out an incandescent for a compact fluorescent, now the swap is to an LED.  Changing a light bulb is a small step that anyone can take, and it’s so cost effective that it can pay for itself in months if the bulb is used frequently.

This is a good example of household energy efficiency measures: a small action requiring a limited investment that anyone can take that pays back quickly.

But efficiency does not have to be small scale and simple.  Efficiency can also be an industrial scale engineering project.  At any scale, however, it tends to be profitable, often very profitable. 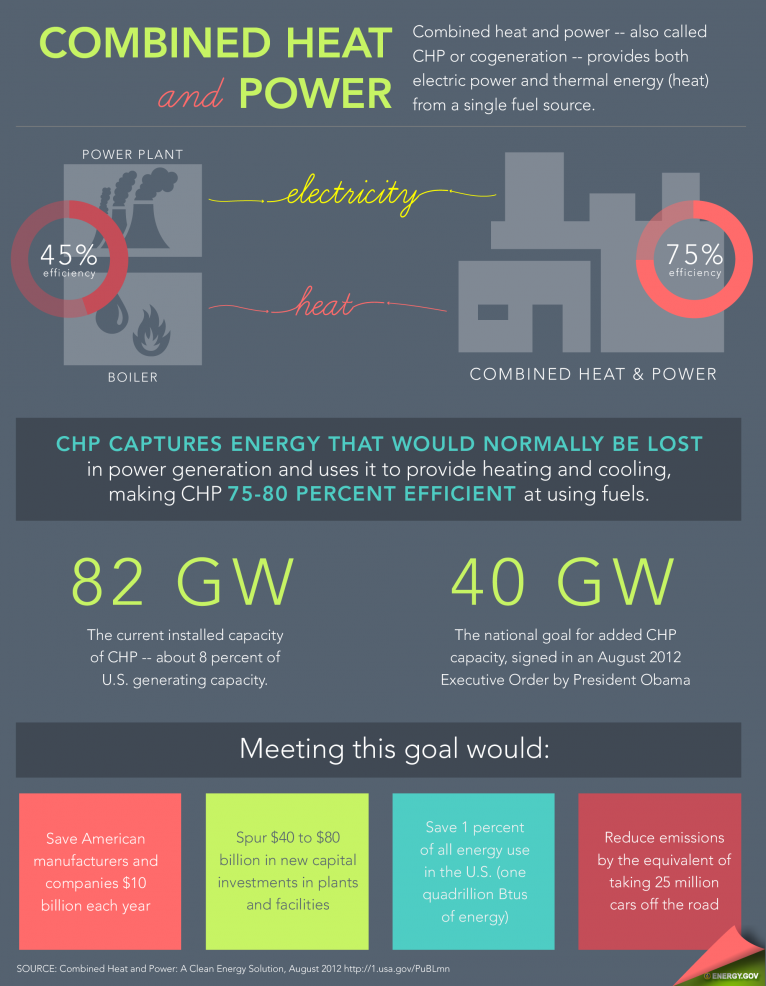 CHP has been around for over a century.  I once toured the 40MW cogeneration plant at the Miller-Coors brewery in Golden, Colorado, which has been operating since 1976.  The waste heat from the power plant is used as process heat for the brewery, and some even goes to heat the nearby Colorado School of Mines campus.  That tour happily ended in the tasting room, which is where I developed a taste for Blue Moon and got the phrase “CHP is the muscle car of energy efficiency” stuck in my head.

CHP accounts for approximately 8% of current installed US generating capacity, and President Obama is seeking to increase that by half again by 2020.

I expect Primary Energy Recycling (TSX:PRI, OTC:PENGF) to be part of the coming expansion of the US CHP fleet.  Primary Energy operates four recycled energy projects and one CHP project at ArcelorMittal (NYSE:MT) and US Steel facilities in Northern Indiana.   These facilities collectively avoid 1,850,000 tons (or 24 kg per share) of CO2 per year  according to EPA data.  Although the company’s customers are concentrated in the steel industry, the facilities they serve are among the most efficient and profitable facilities worldwide, giving Primary Energy significant protection from a steel industry downturn.

The company has 30 years of experience operating and improving these and other CHP facilities.    It previously had as many as 14 such plants, but many were sold when much of the company’s debt came due in 2009 in the midst of the financial crisis.  This was only one of several challenges the company has faced in recent years.  Others were the changes in Canadian tax law which effectively removed the tax benefits of the income trust tax structure, and the recontracting of all but one of their five facilities.  The contract for the final facility (Cokenergy) has been extended several times as the details of a long term contract are worked out.

In an interview, Primary Energy’s CEO John Prunkl explained to me that there is virtually no risk that this contract will not be extended.  It is part of a three-way agreement between ArcelorMittal, SunCoke, and Primary Energy.  The first two finalized their contract in October, and that part of the deal represents 90% of the economic impact for ArcelorMittal.  Primary Energy’s piece is the other 10%.  Analysts John McIlveen at Jacob Securities Inc. and Jeremy Mersereau at National Bank are also both confident the contract will be renewed.

The contract is expected to be similar to the existing contract, but is likely to contain a variable component which will allow Primary Energy to profitably invest to improve the energy efficiency of the facility, as they have at their other facilities.  In 2012, they completed an upgrade at their Portside facility which improved its efficiency from 70% to 90%.  Primary Energy has already begun the upgrades to Cokenergy to improve its efficiency.

The recontacting of the Cokenergy facility will also allow the company to borrow against its cash flows and invest in expanding its business without issuing new equity. They are currently evaluating a number of opportunities, but Mr. Prunkl emphasized to me that they would be emphasizing care in project selection rather than speed of execution.  The types of opportunities they are looking for are with industrial customers, located within the customers’ facilities.  They welcome complex projects where they can efficiently convert hard-to work with fuels into power and heat for their customers.  They expect to be able to achieve a risk-adjusted internal rate of return in excess of 12%.

Primary Energy Recycling’s stock trades in Toronto with the ticker PRI, and over the counter in the US as PENGF.  It pays a US$0.05 quarterly dividend, which amounts to 4.5% at the recent price of C$5.00 / US$4.49.  The company has low debt, with only $41 million compared to a $223 million market cap, which is why it should be able to grow both its business and the dividend without issuing new equity.  I expect the stock price will increase somewhat when the Cokenergy contract is finalized, and more when definitive plans for expanding the business are announced.  While a finalized contract is likely soon, plans for business expansion will take longer.  Mr. Punkl did not want to make any promises regarding timing.  He said, “We’re going to work hard to avoid negative surprises on our investment plans after the Coke Energy deal.  We’re more concerned with making sure the investment will be the right one for us. ”

One downside is that the stock is very illiquid, with an average volume of only 6 thousand shares traded daily, and the average has been closer to two thousand since the start of the year.  Hence, it should only be bought with limit orders or very small market orders to avoid paying over the odds.  I hope a few readers already got a chance to buy after reading my Ten Clean Energy Stocks for 2014.

Primary Energy Recycling is an independent power producer using the greenest form of fuel imaginable: waste heat.  It has a rock solid balance sheet, a healthy dividend, and four long term contracts with solid industrial partners.  With its fifth and final contract soon to be finalized, Primary Energy is on the cusp of several years o
f growth.

CEO John Prunkl says, “We’re pretty excited, but it does require patience.”  I think investors should be (patiently) excited, too.

This article was first published on the author’s Forbes.com blog, Green Stocks on January 23rd.