State renewable energy standards have gained momentum over the past decade with 29 states having put in place various types of standard mandates and five more having implemented voluntary standards (34 total).  Now the federal government is looking to get into the game with a bi-partisan bill (S. 3813) aiming to set a minimum national standard. Renewable energy standards certainly feel good, but do they really provide the best path for achieving their goals?  The existing renewable energy standards are savvy in finding a way to reduce fossil fuel consumption and carbon emissions while simultaneously being politically palatable to a broad array of people.  But they are a bit silly in their formulation.

The popular momentum behind renewable energy standards, I suspect, is driven by the fact that for most consumers, there is no obvious downside.  There is no explicit tax or fee paid to the government as a result of such standards, and the actual cost to the consumer of such standards is far from black and white.   It’s easy for a person to feel good about asking the utility company to generate more electricity from renewable energy sources, and most people don’t immediately correlate that with a cost to themselves.

But what goals are we trying to achieve with renewable energy standards?  Many would quickly respond, “Reducing global warming.”  Others would say, “Reducing our dependence on fossil fuels.”  And those who deal with risk might say, “Diversifying our energy base.”  In addition, politicians sometimes imply that such standards increase our national security.  However, given that our nation sits on huge supplies of coal and natural gas that provide about 70% of our electricity production (vs. only 5.5% from petroleum, which we mostly import), connecting renewable production of electricity to national security is a bit silly.  Case in point, the recent spike in oil prices will have little impact on the cost of electricity in most of the U.S. 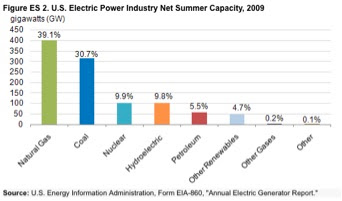 The way that virtually all the state renewable energy standards are structured is that they establish a minimum percentage of electricity generation that must come from specified renewable energy sources by certain timeframes.  An energy source that is not on the list won’t count towards the standard.  And this is where, while well-intended, current renewable energy standards fall short.  The standards almost look like a popularity contest for the technologies with the most hype or longest track records.  As you can see in the bar chart below, there are a large number of potential sources of renewable energy that would be acceptable under the standards of only a relatively small number of states.   And this would be true irrespective of whether that technology might be a more cost-effective alternative.

Opponents of renewable energy standards argue that the standards will inevitably increase the cost of electricity, thereby hurting our economy and lowering our standard of living.  There is merit to this thesis in the near-term, given that most of what the various standards define as renewable energy sources cost more to produce electricity  than the fossil fuel alternatives.  In addition, most renewable sources are intermittent and may not be available during peak load times, thereby requiring investment in energy storage, increased demand load management capabilities or dispatchable generation to effectively manage high percentages of renewable energy on the grid – all of which cost additional money.

Number of States Accepting Various Types of Energy as “Renewable” 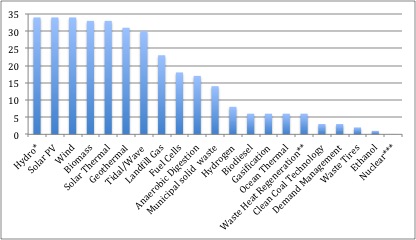 ***Nuclear is somewhat addressed in S.3813 where it is eliminated from the denominator in calculating the percentage of renewable energy generated.

Opponents also argue that the free market should be allowed to pick the most cost-effective energy sources.  If one does not believe that any of the three aforementioned goals are critically needed, then such a pure free market approach would make sense.  But the free market can fall short when there are externalities that have significant negative impacts on individuals or on the nation as a whole.  If such externalities are not reflected in the economic incentives that drive company decisions, the free market will generally ignore the negative consequences. (For a related discussion, see my post “Cleantech Economics 101”.)  Numerous historic examples exist such as acid rain, asbestos and lead paint.  And our electrical infrastructure is more than just another industry; it is infrastructure as critical to our economic commerce as roads, airports and railroads – infrastructure that is used by every business and every consumer every single minute of every day.  Thus, for those of us who do believe that the goals are very important, the basis for renewable energy standards is sound.

However, the restrictive and prescriptive nature of the established renewable energy standards serve to bolster opponents because they eliminate the ability of the utility company to utilize the most cost-effective alternatives.  Going back to the goals of these standards, it must be asked why any specific technology should be named.  If the goal is to reduce carbon emissions, reduce fossil fuel consumption and/or diversify our sources of electricity production, then shouldn’t any technology that achieves this goal be acceptable?  Why should waste heat regeneration into electricity, gasification, and many other technologies that may ultimately be better solutions be excluded in so many states?  Why would demand management (energy efficiency) not be an acceptable means in most states for achieving at least the first two goals?

And even in the light of the earthquake disaster in Japan, why shouldn’t nuclear as an option? It clearly achieves those three goals and, unlike most of the other options, can be used as base load. It would be easy to run from nuclear in light of the Japanese nuclear crisis that was caused by a record setting earthquake.  But we should not forget that there is rarely a free lunch.  Nuclear still has proven to be much less deadly than our most common form of electrical generation (i.e., coal plants), which releases more radiation than nuclear plants.  In the end, I suspect that far fewer people will die as a result of radiation exposure in Japan than from the direct effect of the earthquake and tsunami themselves.

Beyond outright cost, one of the biggest challenges with most renewable energy is that it is intermittent and cannot provide base load.  The world needs options for base load to bridge from where we are today to the (hopefully) disruptive break through in energy technologies of the future.   Part of the reason we don’t have even safer nuclear power is the lack of significant demand for new nuclear power.  This is as much an inhibitor of innovation of newer and potentially much safer designs (such as Thorium reactors and liquid metal cooled reactors which have the potential of fail safe designs, much lower half life of waste materials and low proliferation risks) as would be the lack of demand for solar or wind on those industries.  All current renewable energy sources have negative environmental impacts and risk – none is perfect (more on this in a future post).  Given that a perfect solution is likely out of our reach for the foreseeable future, our goal should be to strive for overall improvement in our energy base.  To that end, utilities should have the flexibility to implement various energy production methods that achieve the goals as well as technologies that reduce energy consumption.

Allowing greater flexibility would decrease the near-term costs to businesses and consumers by allowing utility companies to choose the most cost effective solutions that meet the goals.  In addition, it would further broaden the net of political support for such standards.  One way this flexibility could be achieved would be by allowing utilities and businesses a clear path to obtain approval from their public utilities commission for new technologies under renewable energy standards.  Any technology that achieves the goals of carbon emissions reduction, fossil fuel consumption reduction, and energy source diversification should be allowed.  Renewable energy standards shouldn’t be about supporting a specific technology or industry.  They should be about reducing the risk of global warming and increasing the robustness of our electric infrastructure in the most economical way possible.