Last Friday I breathed a sigh of relief as my core position in Axion Power International (AXPW.OB) regained the price level it established in the first quarter of 2010. The last 12 months have been a stockholder’s worst nightmare as supply and demand dynamics pushed Axion’s stock price down into the $0.50 range and kept it there. Since it looks like new buyers have finally eaten their way through the excess supply, now seems like an opportune time to unwrap my crystal ball and lay out an elephant hunter’s thesis for Axion’s stock price outlook over the next few months.

Axion went public through a reverse merger in December 2003. Like many reverse merger companies, its market was illiquid in the early years and the stock traded by appointment. The following table summarizes the reported annual trading volume during Axion’s first seven years as a public company. It shows the total reported volume for each year and the percentage derived by dividing the reported volume by the fully diluted common shares outstanding at year-end.

So far this year, Axion’s cumulative trading volume is 18.4 million shares. That means 2011 is likely to be the first time in its history that annual trading volume will exceed 50% of the issued and outstanding shares, a level of activity that most investment professionals believe is required for a healthy liquid market.

In December 2009 Axion closed a $26 million private placement that is properly classified as a venture capital investment in public equity, or VIPE, transaction. Four purchasers including Blackrock, the Special Situations Funds, Manatuck Hill Partners and one individual, bought 31.4 million shares in blocks of 7.2 to 8.8 million shares each. In addition, 47 small funds and individuals bought 14.4 million shares in smaller blocks. The offering was priced at $0.57 per share and the 45.7 million shares that were sold in the offering represented about 55% of the company.

In a September 2010 study of 1,655 VIPE transactions between 1995 and 2008, the authors reported that VIPE investors typically buy at a 47% discount to market, which meshes well with my experience that large private placements are typically priced at a 50% discount to market. The reasons for the deep discount are obvious. In a market transaction, an investor will buy a few hundred to a few thousand shares with the expectation that he can change his mind, liquidate and move on whenever he feels like it. In a VIPE transaction, an investor cannot have any reasonable liquidity expectations for months or even years. In cases where several large investors participate in a VIPE transaction, the liquidity assessment is performed at the transaction level, rather than the investor level. In cases where there’s a big gap between historical trading volumes and the size of the VIPE transaction, the discount will usually be more than 50% to offset the liquidity deficiencies.

If one assumes that 50% was a proper discount for Axion’s VIPE transaction where the investors bought shares that represented six and one-half years of historical trading volume, the transaction should have put a $1.15 baseline trading value on Axion’s stock. If one assumes that a 60% discount would be more appropriate in light of the liquidity deficiencies, a baseline trading value of $1.50 per share would have been more reasonable. Those two numbers bracket the range – $1.15 on the low end and $1.50 on the high end – that I believed Axion’s stock would trade in when I wrote a December 2009 article titled “Why I’m Thrilled by Axion’s Financing Transaction.”

While I believed in December 2009 that Axion’s stock price would stabilize in the $1.15 to $1.50 range, and it did exactly that during the first quarter of 2010, liquidations that were unrelated to business fundamentals began in the second quarter and continued into the summer. As a result, the price was beaten down to an all time low of $0.46 before stabilizing in the $0.60 range by year-end. Since then, the stock price has doubled.

I’ve always believed the plateau from February through April 2010 represented fair value and the slump that began in late April was based on supply and demand dynamics instead of business fundamentals. While Axion’s stock price was swooning, the following key corporate and regulatory events were unfolding.

A couple of these events were nothing short of extraordinary.

Many small companies in the battery and power electronics space decide to develop their own battery management system expertise, but I’m not aware of another situation where a transportation giant like Norfolk Southern hired a micro-cap company like Axion to develop a battery management system as the first step in a project geared toward the potential retrofit of a portion of its diesel electric locomotive fleet to hybrid diesel electrics.

Many small companies in the battery space are engaged in development projects with automakers, but the identities of the automakers are closely guarded secrets until the automa
kers announce a production decision. Several recent reports that other battery manufacturers have won production contracts from automakers but declined to publicly identify their customers are prime examples of the normal course of business. I’ve spent several months searching for a comparable example of a joint technical presentation by an automaker and a battery developer at a major industry conference. So far my effort has been unsuccessful.

Axion was not dealing with a normal market in 2010 and is just now getting back to the baseline trading value it established in the first quarter of 2010. While it’s hard to say what the 2010 developments would have been worth in the in the context of a more normal trading market, I think most people who invest in small company stocks would have expected at least a double from the Norfolk Southern and BMW relationships and perhaps a good deal more.

I don’t know what the fair value of Axion’s stock is or where the price will go from here. However my experience with small companies in the valley of death has taught me that over the long-term market prices tend to oscillate around a fair value line, but only touch fair value as they transition from one extreme to the other. In cases where the market price has been undervalued for an extended period of time, the next stage is a roughly equivalent overvaluation for a similar period of time. If you want to assume that $2.40 would have been a reasonable fair value in December 2010, you can pretty well count on an eventual peak in the $4.20 range. If you believe $2.40 would have been low in a normal market then your outlook for the next peak should probably be higher.

Over the last year I’ve been frank in expressing my opinion that Axion was undervalued. As long as the market price was within spitting distance of the price paid in the 2009 VIPE transaction, it was easy to take that position. Now that Axion’s market price has returned to a level that represents reasonable parity with the 2009 VIPE pricing, we should begin to see how the market values the events that have transpired over the last year. Axion’s year-end earning call is scheduled for Thursday of this week and I’m hoping management will add color to their recent disclosures and better explain their outlook for the coming year.

I wrote this article because several readers have asked me what my expectations are for Axion’s future stock price. While I don’t usually make price predictions, I thought a detailed explanation of my opinions and outlook would be more valuable than stony silence. I will probably be more restrained in my future discussions of Axion’s market price, but the elephant hunter in me thinks the fun is just beginning.

Disclosure: Author is a former director of Axion Power International (AXPW.OB) and holds a subtantial long position in its common stock. 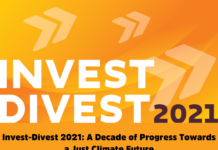 Invest-Divest 2021: A Decade of Progress Towards a Just Climate Future