While renewable energy often captures most of the cleantech headlines, if anyone doubts why energy efficiency must play a significant part in the cleantech effort – as significant, if not more so, than the role of renewable energy just examine the energy flow graphic developed by McCall and Bassett and reprinted in the June edition of Technology Review.  At least half of U.S. energy consumption goes to nothing more than creation of hot air through waste heat.  And, when one realizes that much of the 13.9% of electricity output from power plants shown in the graphic also ends up as hot air from our computers, lights, etc., the portion of energy consumption going up in hot air is actually greater than 50%.

Couple this with the following facts… According to the Energy Information Administration (EIA), on a worldwide basis renewable energy currently supplies roughly 10% of the energy consumed.   Over the next 25 years the EIA forecasts worldwide energy consumption to grow by more than 50%. They also forecast a 100% increase over that period in the supply of renewable energy, which, in isolation sounds modestly impressive.  But this would equate to less than 15% of all energy being consumed because consumption would have increased 50%.   Worldwide renewable energy production would have to increase upwards of four fold to equal just about 25% of the energy consumption forecasted for 25 years from now.  Meanwhile, with 50% growth in consumption, the other 75%, representing fossil fuel consumption, would still equal more fossil fuel than the world consumes annually today!

Energy efficiency not only saves on total energy consumption today but also is magnified as consumption increases because the additional devices consuming energy will consume less if they are more efficient.  For example, increasing the average efficiency of all vehicles on the road an average of 50% (e.g., from 20 mpg to 30 mpg…not such a high hurdle) would reduce overall U.S. energy consumption by over 9%…that’s 9% of today’s consumption and tomorrow’s increased consumption because all the additional miles forecast to be driven would also be in more fuel efficient vehicles.  To achieve that same impact with renewable energy would require about a 150% increase in U.S. renewable energy production and about a 225% increase to achieve the same offset in 25 years. 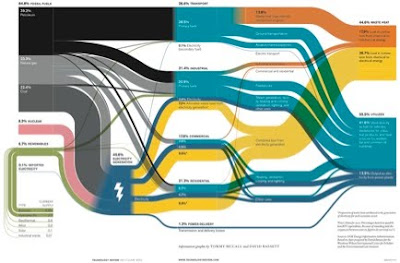