Since I’ve stirred up a hornet’s nest over the last two weeks first by debunking the mythology that PHEVs and EVs will save their owners money and then by showing how PHEVs and EVs will sabotage America’s drive for energy independence, I figured I might as well go for the triple-crown of harsh realities by showing readers that in the U.S., where 70% of electricity comes from burning hydrocarbons, PHEVs and EVs won’t make a dent in CO2 emissions. They’ll just take distributed CO2 emissions off the roads and centralize them in coal and gas fired power plants.

I started to seriously question the policy arguments in favor of PHEVs and EVs when McKinsey Quarterly published an article titled “Profiting from the low-carbon economy” in early August. The article included a “Global carbon abatement cost curve” that shocked me because it showed that HEVs offered a substantial cash benefit from carbon abatement while PHEVs imposed a significant carbon abatement cost. A few days ago I got permission to reprint the original graph from a recent McKinsey & Company report titled “Pathways to a Low-Carbon Economy. Version 2 of the Global Greenhouse Gas Abatement Cost Curve,” 2009.” 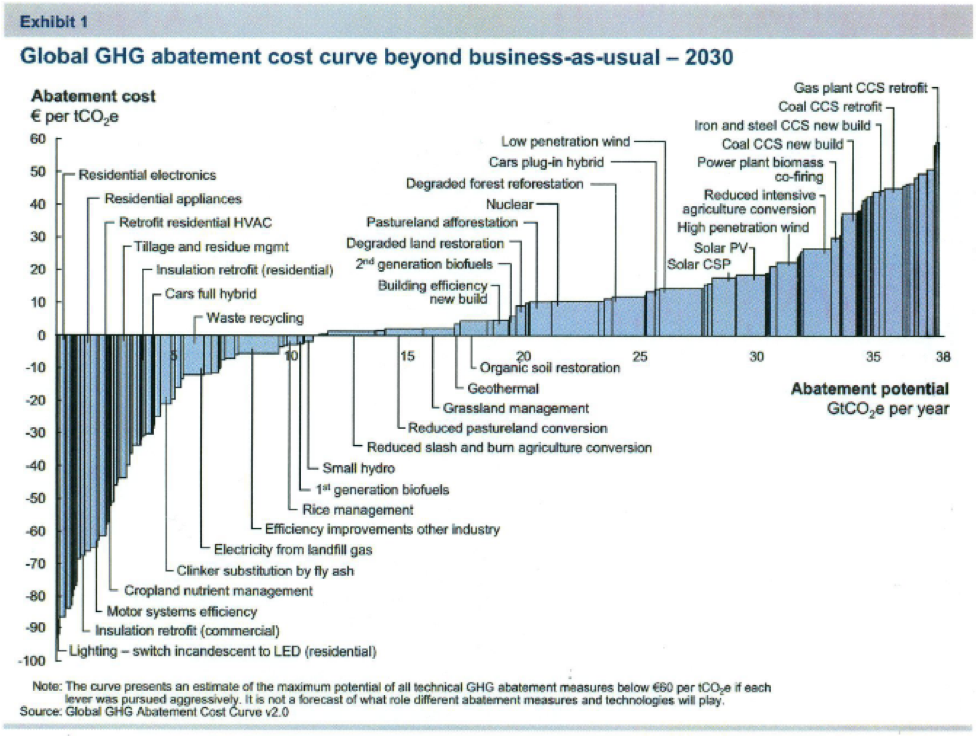 While the graph is fairly complex because it shows both the benefits and costs of various carbon abatement options and the potential amount of CO2 that each option could eliminate, the key issue is the relative positions that HEVs and PHEVs occupy on the curve. HEVs are shown on the left hand side of the graph between residential insulation retrofit and electricity from landfill gas; which means that HEVs save €30 ($43) per metric ton of carbon abatement. PHEVs are shown on the right hand side of the graph between nuclear power plants and low penetration wind farms; which means that PHEVs cost €12 ($17) per metric ton of carbon abatement. Since the McKinsey graph analyzed abatement costs at a ‘global’ level, I felt compelled to dig a little deeper and analyse their impact in the U.S.

In its latest report on greenhouse gas emissions in the U.S., the Energy Information Administration said that CO2 emissions from electricity generation were 2,433.4 million metric tons in 2007. In its 2007 annual summary of electric power in the U.S., the EIA reported that net generation of electric power during 2007 was 4,157 billion kilowatt-hours from the sources identified in the following graph.

When you divide the total CO2 emissions from electricity generation by the total amount of electricity generated, it works out to 585.4 grams of CO2 per kWh. While the figures vary among manufacturers, the average electric-only range of the PHEVs and EVs planned by General Motors, Nissan (NSANY), Mitsubishi (MMTOF.PK), BYD (BYDDF.PK), Tesla Motors, Fisker Automotive, Th!nk Global and a legion of others is roughly 4 miles per kWh of useful battery capacity. So in the U.S., a PHEV or EV will ultimately be responsible for about 146 grams of CO2 emissions per mile unless the owner has the foresight and dedication to buy solar panels or wind turbines to generate the electricity his PHEV or EV will use.

Is it any wonder that Vinod Khosla keeps telling interviewers that in the U.S., China and India, PHEVs and EVs will be plugging into a lump of coal for years to come?

News stories, speeches and press releases can only maintain the electric drive illusion for so long. Sooner or later the public is going to realize that it’s all hype, blue smoke and mirrors, and that PHEVs and EVs have little of substance to offer customers in the U.S. market. When the public comes to the realization that electric drive vehicles:

It would be wrong for readers to assume that I dislike lithium-ion battery technology, because I believe it will be an increasingly important part of the coming cleantech revolution. I also believe that companies like Advanced Battery Technologies (ABAT), Altair Nanotechnologies (ALTI), Johnson Controls (JCI) and A123 Systems (IPO pending) that are taking a diversified approach by focusing on products for a wide variety of consumer, industrial, utility and military applications will grow and prosper. But the companies, reporters, financial analysts and politicians that have built a mountain of unreasonable expectations from an electric drive molehill may be in for a tough time.
DISCLOSURE: Author is a former director and executive officer of Axion Power International (AXPW.OB) and holds a large long position in its stock. He also holds a small long position in Exide (XIDE).

John L. Petersen, Esq. is a U.S. lawyer based in Switzerland who works as a partner in the law firm of Fefer Petersen & Cie and represents North American, European and Asian clients, principally in the energy and alternative energy sectors. His international practice is limited to corporate securities and small company finance, where he focuses on guiding small growth-oriented companies through the corporate finance process, beginning with seed stage private placements, continuing through growth stage private financing and concluding with a reverse merger or public offering. Mr. Petersen is a 1979 graduate of the Notre Dame Law School and a 1976 graduate of Arizona State University. He was admitted to the Texas Bar Association in 1980 and licensed to practice as a CPA in 1981.