Investors interested in renewable energy often get singularly focused on innovators new energy sources at the expense of companies that provide the nuts and bolts of the energy infrastructure.  Advanced Energy Industries (AEIS:  Nasdaq) is a stalwart of the electric power network, providing power conversion and control components that convert energy to the proper current for use by consumers and business.  The company has a broad product line that has applications with a diverse customer base, including semiconductor manufacturers and chemical processing plants. The 2017 acquisition of Excelsys Holdings Ltd. based in Ireland added products targeted at medical and industrial applications.

As popular as Advanced Energy is with its customers, investors do not seem to pay much attention.  The stock trades at a multiple of 10.33 times earnings expected in 2019.  Given that the Russell 2000 Index composed of small-cap stocks is trading at a forward multiple of 19.00, it would seem Advanced Energy is not getting enough respect.

What are investors missing in AEIS?

Advanced Energy reported $98.8 million in net income on $744 million in total sales in the twelve months ending September 2018.  The represents a net profit margin of 13.3%.  Some investors might be impressed by the accomplishment and look for further, but earnings reported following GAAP prescriptions leaves so much out of the picture.  A better barometer might be how much of each sales dollar is converted to operating cash flow that can be used for investment or adjustments to capitalization.  In the same twelve months, the company converted 22% of sales to operating cash.  That is impressive!

It is also important to figure out what leadership is doing with its cash.  At the end of September 2018, Advanced Energy held $338.7 million in the bank, compared to $407.3 million at the end of December 2017 and $282 million in December 2016.  Thus it appears management has been letting cash pile up, but only to some extent.  Spending on maintenance capital has been modest, running an average of $12 million per year over the last four years and after a recent acceleration in spending in 2018.

Management has not been shy about growth investment.  In the last two years, Advanced Energy has plowed $111.2 million of its cash into acquiring strategic operations.   The Excelsys deal in July 2017, brought the company even further out of its China origins and added a proven manufacturing site to its global footprint that already includes Littlehampton, UK and Ronkonkoma, New York as well as the home base in Shenzhen, PRC.

The Excelsys deal must have whetted an appetite in the Advanced Energy board for corporate shopping.  So far in 2018, Advanced Energy has snapped up three companies that have added products, technology and market share to the mix.

The impact of these recent deals on financial results is yet to be seen. Extension of Advanced Energy’s footprint and expansion of the product line would seem to put the company in a much better competitive position. The company has done well with its tactics in the past, delivering returns on invested capital (ROIC) in the high twenties in each of the last two years.  This compares very favorably to a single digit cost of capital, which is essentially the company’s cost of retained earnings.

Management seems to agree that Advanced Energy market value is out of whack with the company’s fundamental performance.  Some of that ample cash from operations  –  $149 million over the past four years  –  has been used to buy back stock.    AEIS shares may not give investors the bragging rights of an electric car manufacturer or a social media giant, but this undervalued stock should not be overlooked.

This article was first published on the Small Cap Strategist weblog on 11/24/18 as “Advanced Energy: Overlooked and Undervalued.” 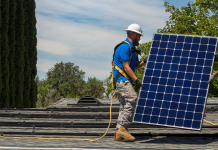