‘ve said it before, and I’ll say it again…

If you want to profit from solar, the money is in installation and technology.

Certainly SunPower (NASDAQ: SPWR) knows this to be true. One of the few U.S. solar plays still around, SunPower surprised analysts with a narrower Q1 loss and sales that exceeded estimates. This, by the way, was due to an increase in installations. No surprise there.

And certainly those of us who regularly monitor installation data, which is not hard to come by, have been quietly picking up shares since the start of the year.

The result? Take a look: 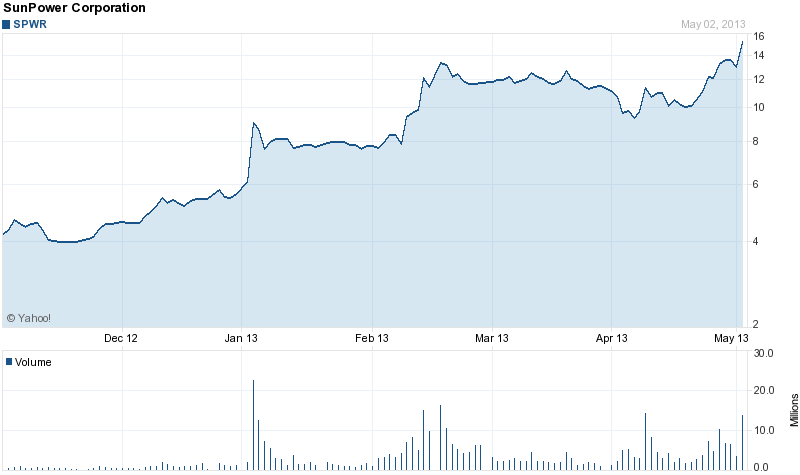 This isn’t to say SunPower is in the free and clear; the solar business remains a tough one with nearly impossible margins.

But those still in the game are stronger today compared to where they were last year  and the year before that.

With global installations continuing to soar especially here in the United States installers are busier and more profitable than ever. Certainly the only publicly-traded solar installer and leasing company SolarCity (NASDAQ: SCTY) is proof of that. Just look at this chart: 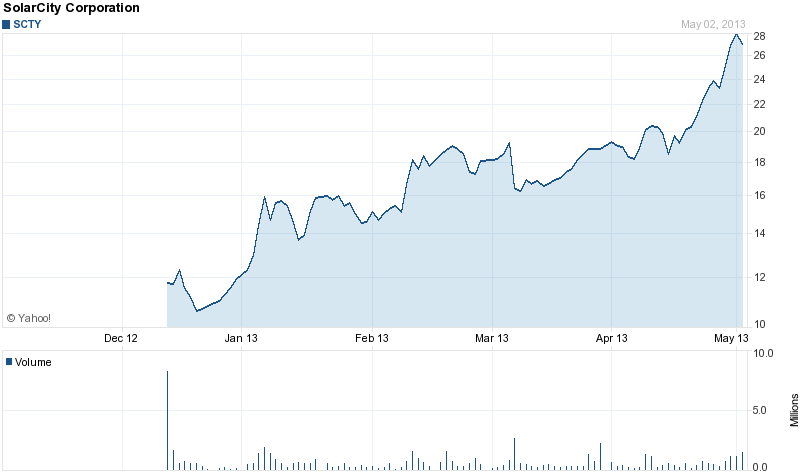 Of course, you may want to wait for these to cool off a bit for jumping on for the ride.

$8.6 Billion Worth of Product

As you saw, there’s big money in solar installation these days. And investors who have taken advantage of this reality and invested accordingly have done quite well.

I’m talking about solar technology. The top-notch solar tech plays of today will be the gatekeepers of the industry tomorrow. And that’s why we’re loading up the boat while they’re still insanely cheap.

We’re most impressed with two specific solar tech angles right now: The first is through a new solar material that’s currently being perfected at the University of Manchester and the National University of Singapore. I won’t dive too far into the particulars, as you’d need a few chemistry books to even attempt to understand it. (I even needed to run this one by my old chemistry professor to get a handle on this thing). But here’s the basic idea…

As explained by research reps from the University of Manchester, this particular materials discovery could lead to entire buildings being completely powered by sunlight, which is absorbed by its exposed walls.

Antonio Castro Neto from the National University of Singapore said, “We were able to identify the ideal combination of materials: very photosensitive TMDC and optically transparent and conductive graphene, which collectively create a very efficient photovoltaic device.”

While some of that may sound like scientific mumbo jumbo, the only thing you need to know here is that the key element is graphene.

Graphene is what makes this entire process possible.

As you know, we’ve been singing the praises of graphene for years. And nearly every week we discover a new use for this miracle material.

From advanced desalination systems and high-powered supercapacitors… to cellphone touchscreens and bulletproof vests… graphene will be found in nearly every commercial and industrial application in just a few short years.

And this is why it’s so important that you load up on quality graphene plays NOW before the herd rushes in and jacks the price up. That, by the way, will be when we cash out.

Solar in the Black

A more direct way to play the solar tech angle is through manufacturing systems and tools.

The interesting thing about solar is that over the years, it’s been the suppliers of these “tools” that have benefited the most. Applied Materials (NASDAQ: AMAT) actually made a sizable chunk of change in this space back in 2006-2007.

But like most solar manufacturing processes, what’s hot today is nearly useless tomorrow.

You may have read about black solar before, as it’s long been a sort of dream deferred for solar manufacturers. It’s essentially a specialized chemical coating that allows solar panels to trap ten times more light than what’s available today.

A great idea in theory, but in practice, hard to prove…

Well, those days are over. Not only has black solar been proven effective and completely doable on a commercial scale, but there’s a conga line of solar manufacturers looking to license this technology right now. Because the end result of having this technology in place is a 50% cost reduction and a full doubling in efficiency.