The stock market took off in November, fueled by very positive covid-19 vaccine news, and possibly also the prospect of a little competence and sanity in the White House.  While both of these are unambiguously positive for the economy, I think investors are seeing the future through rose colored glasses.

What a Biden Victory Means for the Economy

A Biden victory is good news in that we will finally have someone in the White House who will work to reduce the infection rate in the pandemic, rather than vacillating between wishful thinking and actively spurring it on by denigrating mask wearing and organizing mass rallies seemingly designed to spread the disease.

A Biden victory is also good news because it means we will have someone in the White House who will be actively working to get a pandemic relief bill through Congress.  Chances of that bill being large enough to tackle the problem depend on Democrats winning both of the Senate run-off races in Georgia.  If the Republicans keep either of those seats, McConnell will continue to control the Senate, and McConnell has said he wants a $500Bn relief bill–far too small to deal with the damage being caused by the out-of-control pandemic, and the lockdowns states are being forced to impose in response.  Polls for both races are within the margin of error, with the Republican leading slightly in one and the other being a dead heat.  Even if we assume that voters will focus on control of the Senate and not split their votes, Democratic chances of controlling the Senate are likely below 50%.  Since the Dems need to wind both races, significant vote-splitting will ensure McConnell remains in charge.

What the Vaccine News Means For the Economy

The big news on the vaccine front in November was not that the first vaccines will likely start being administered before the end of December (while the timing was uncertain, getting the first doses in December seemed likely.)  The fact that the early results show that three of the prospective vaccines are remarkably effective at preventing infections is both a surprise and significant reason for optimism.

While the likely high efficacy of these vaccines is excellent news, there is still a long way between vaccine trial results and getting enough of the population vaccinated to stop the spread of the virus.  The main reason I do not invest in technology startup companies is because so many things can go wrong between promising lab results and selling a product to the mass market.  I see the producing and distribution of these vaccines as an  analogous situation.  We will be attempting to vaccinate the majority of the population faster than it has ever been done before.

We also lack long term studies of the effects of these vaccines.  How long are they effective? We know that there are cases of people who have had the virus getting it again, leading us to believe that natural immunity is not permanent. Vaccine-induced immunity will likely also fade over time.  Even if a vaccine is 95% effective for the first month, how effective will it be six months or a year later?

Production and distribution snafus, are possible as well, and we still need to persuade a majority of the population that they should get the vaccine.

President Trump claims that we will be able to get most of the population vaccinated by June 2021.  Given the source, we can comfortably assume that this is a wildly optimistic, if not impossible goal to achieve.  So even if everything goes right with the vaccine, the earliest we can expect to be able to relax social distancing measures will be the second half of 2021, and the economic damage will continue to be done at least until that happens.

In short, my 2021 outlook remains grim, and the good vaccine news plus Biden victory which have led to the November rally do not seem to justify a 15%-ish rise in an already overvalued market.  I will continue to approach the market with extreme caution until I see actual economic recovery, or a large market decline leading to much better stock valuations. 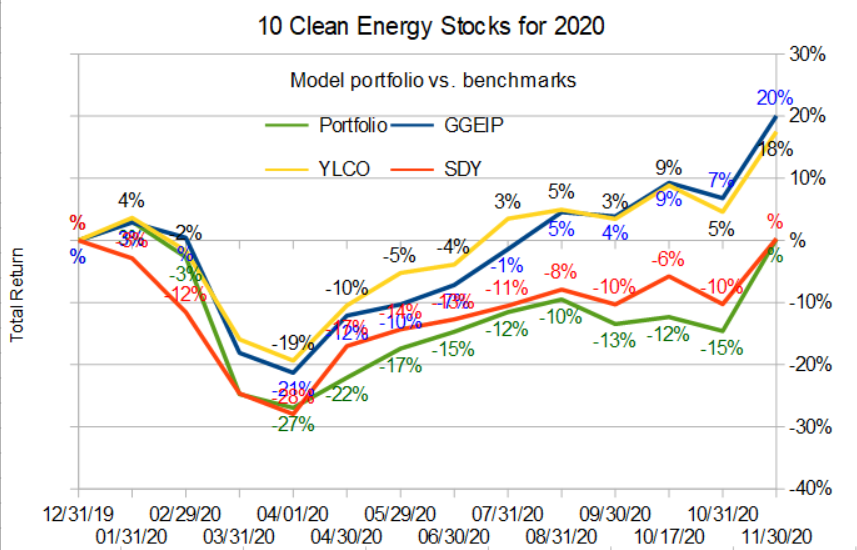 Despite my caution, the 10 Clean Energy Stocks for 2020 model portfolio did well in November.

The model portfolio has finally broken even for the year, in line with its broad market income stock benchmark, SDY.  However, compared to its clean energy income stock benchmark (YLCO, up 18%) and my real money Green Global Equity Income Portfolio (GGEIP, up 20%), the performance continues to be disappointing.  You can find my thoughts on why it might be lagging in my September update.

All stocks seem expensive to me right now, and I generally prefer to move to the sidelines than play the relative valuation game in an overvalued market.  In general, I like the companies in the portfolio, but am not buying and am taking some profits or selling calls on the larger positions. 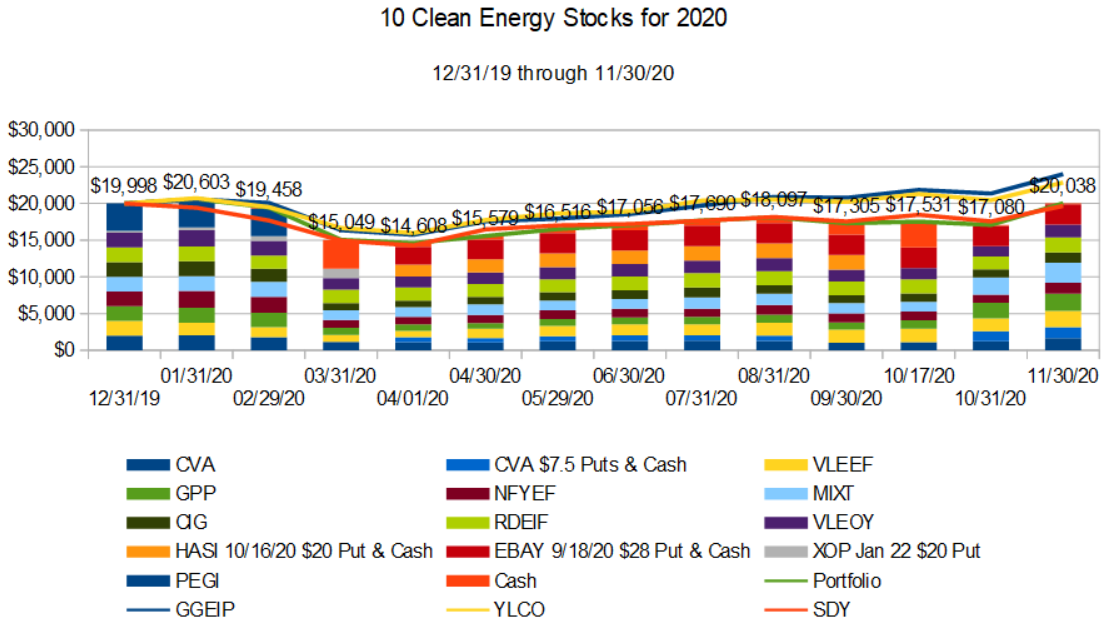 I published a few earnings highlights for my supporters on Patreon in late October and early November.  They are a little out of date now, but I’ve changed the permissions so that everyone can read them at these links:

Note that I have become significantly less pessimistic about NFI Group since I wrote the note above because the vaccines seem likely to be more effective than I was assuming in early November.

I also published a note about Brookfield Renewable (BEP, BEPC): https://www.patreon.com/posts/43707068, which is not currently in the portfolio, but has often been in the past.

I’m still waiting for a downturn before I’m ready to start buying.  Yes, the election and vaccine news are good for the economy, but the stock market never seemed to reflect just how bad the economy is likely to get before the recent news, and it still does not.

I continue slowly taking more profits as my stocks rise by selling covered calls or portions of my positions.

DISCLOSURE: Long positions all the stocks in the model portfolio with the exception of NFYEF is now a very small position.