The risks of playing politics

The American news media often tries too hard to be “balanced” when talking about politics.

Depending on which news sources you rely on, you may be hearing that “congress” is having trouble passing bills to fund the government and raise the debt ceiling. More partisan sources will be blaming it on the Democrats or the Republicans, depending on their political bent.

I generally consider myself an independent who cares deeply about the environment and competent government. Since the rise of Donald Trump, the Republicans have shifted from being the party of big business (often anti-environment) to the party of big fossil fuels and corruption. Where I used to be mostly aligned with Democrats because of their pro-environmental stance, the recent shift from conservative political positions to the disinformation fueled corruption and pursuit of power for its own sake of Trump and those who follow his lead, I (now) have no choice but to take the opposing position. And because I feel that much of the mainstream media is focused on trying to be “balanced” at the expense of telling it like it is, I’m going to tell it like I believe it is:

McConnell and other Republicans in the Senate have decided that they want to be able to score political points by blaming Democrats for raising the debt ceiling, rather than voting to do the responsible thing for the country. They certainly did not have any problem adding to the credit card bill by passing giant tax cuts when they controlled the government, while Senate Democrats did the responsible thing by supporting Republican efforts to raise the debt ceiling the last time it came up for a vote. But Republicans would rather score political points than vote to pay the debt that they ran up – or even allow the Democrats to have that vote on the Senate floor.

We can see the harm caused so far in the 5% declines of my 10 Clean Energy Stocks model portfolio and its benchmarks in September: 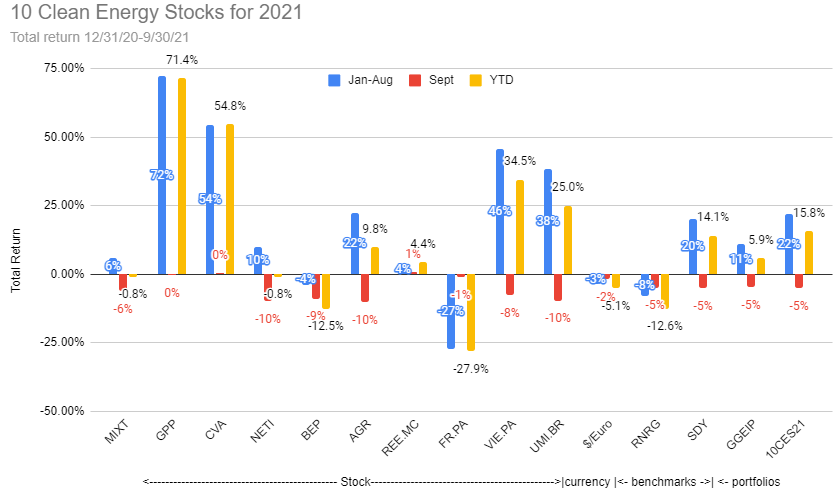 A real bear market will look much worse.

The political standoff over the debt ceiling could easily be the event that ends the current bull market. With the Federal Reserve reducing its stimulus to the economy, and the Delta variant rampant in more rural parts of the country due to low vaccination rates, I find it surprising that the market remains as strong as it does.

The Democrats will almost certainly eventually raise the debt ceiling, but only after considerable economic damage has been done. This is a certainty, since that damage has already started, and barring a reversal by McConnell, it is likely to continue for weeks if not months.

I’ve been cautioning my readers to be prepared for a market downturn for almost a year now, so if we enter a bear market, my readers and I will probably be fine. Those of us who are prepared may even scoop up some stock market bargains at discounted prices.

This potential opportunity to shop a stock market sale and the Republicans scoring a few political points is simply not worth creating a crisis that simply did not need to happen.

If the Democrats are forced to raise the debt limit by reconciliation, I hope they take the process one step further and remove the debt ceiling altogether. These periodic artificial debt ceiling crises are bad for the economy, and one more barrier to the ineffectual congress actually getting something useful done for a change.

DISCLOSURE: Long all stocks in the 10 Clean Energy Stocks for 2021 portfolio.