This is a roundup of first quarter earnings notes shared with my Patreon supporters over the last week. If there is any theme, it’s that low interest rates and increased interest in green investments is lowering Yieldcos’ cost of capital to the benefit of stock investors.

Although Avangrid’s share price increased significantly after it got shareholder approval for the PNM merger, it remains reasonably priced compared to most Yieldcos.

I originally put Brookfield Renewable Partners (BEP) shares in the 10 Clean Energy Stocks for 2021 portfolio because I thought its ability to raise capital by selling its turbocharged Brookfield Renewable Corp. (BEPC) share class would give the stock a boost if the ongoing clean energy stock bubble continued a few more months.

Two things undermined that thesis- the clean energy stock bubble popped sooner than I expected, and while its parent Brookfield Capital Management (BAM) did take advantage of the huge premium BEPC shares commanded at the time, the company itself did not issue any new BEPC shares so it was not able to get the influx of cheap capital I had hoped for.

Now that the stock is down 15 percent since the start of the year, I’m beginning to get interested again, and am beginning to sell out of the money cash covered puts on BEP to replace the BEPC shares I was selling at the end of last year during the height of the bubble.

To be clear, I don’t think BEP is cheap enough to be a strong buy yet, but it’s an important company to keep in the portfolio as a core long term holding.

A couple of the reasons I think of BEP as a core holding came up in the earnings call:

In short, the first quarter earnings showed the ability to generate profits by operating their extremely stable assets well, selling assets after they have seen great appreciation, and by investing in new sectors like offshore wind where they are one of only a few players with the size and experience to operate successfully.  Given the limited number of developers who can compete in offshore wind, I expect the returns for those developers who can participate will be higher than solar and onshore wind where smaller players have a chance of being competitive.

While it’s not in the 10 Clean Energy Stocks list this year, Clearway Energy (CWEN, CWEN-A) was from 2016 to 2018, when it was NRG Yield, so I suspect it is still in many readers’ portfolios (as it is in mine.)

I thought it was interesting just how significant a boost the company got by refinancing… replacing $600 million of senior notes at 5.75% with a new green bond at 3.75% while extending the maturity from 2025 to 2031.  The lower interest payments alone allowed it to boost its outlook for cash available for distribution to shareholders by 5 cents a share annually.

Clearway is not alone; most Yieldcos have been refinancing and raising new debt in the current low interest rate environment, and the newly maturing market for green bonds.  The evidence is strong for a “Greenium:” a green premium allowing green bonds to trade at higher prices (and lower interest rates) than conventional bonds that do not support green projects.

This bodes well for hopes for massive new investments in green infrastructure including wind and solar. Since these projects can be financed at lower interest rates due to the greenium, there will be more well financed developers willing to build them. 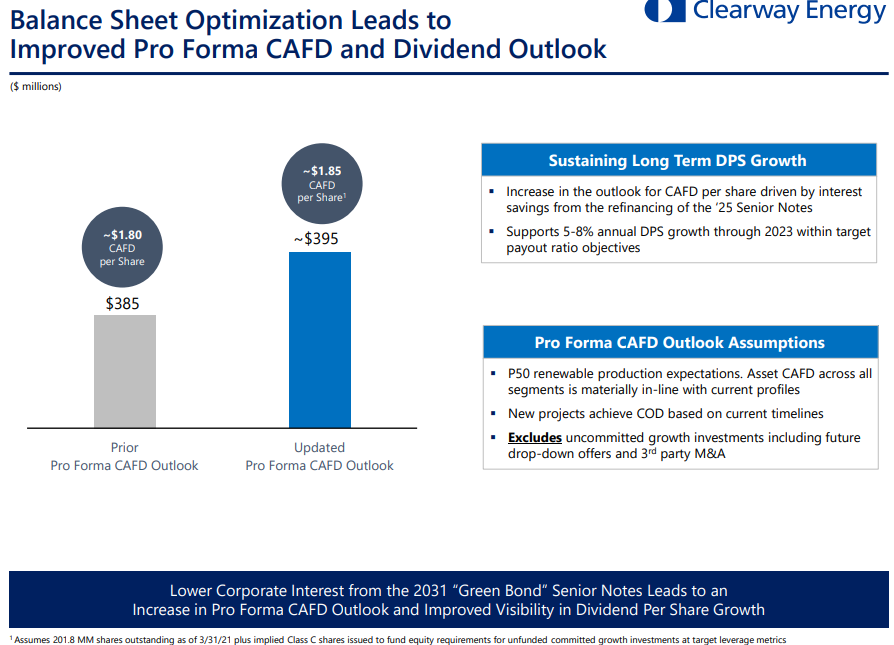 Green Plains Partners (GPP) made significant progress reducing its debt burden in the first quarter.   In an agreement with lenders reached last year, substantially all its free cash flow beyond the current $0.12 dividend is going to pay down debt until the debt burden is paid off.  This quarter, that included cash from the sale of one of the partnership’s ethanol plants.

Without additional asset sales, GPP will be debt free in the second half of 2022, and free to redirect cash flows to paying the dividend and making new investments.  Before it cut its dividend last year, it was paying $0.475 a quarter.  This was using all of GPP’s free cash flow,  so if dividends are increased it will be to some lower level.  I would expect a new dividend in the $0.25 to $0.30 range, but with some prospects for dividend growth given the retained capital for investment.

At the current stock price of $12, that would be a substantial yield in the 8 to 10 percent range.  This is in line with most MLPs, so I consider GPP to be approaching fair value at this point and am beginning to take profits and trim my holdings so it’s no longer an outsized part of my portfolio.