Readers who followed my coverage of the Yieldco bubble in 2015 know the Yieldco Virtuous Cycle.

This cycle ran from 2013 to mid-2015, when the public Yieldcos at the time got too greedy, issuing more shares than the market could absorb.  Share prices stopped rising rapidly, so Yieldcos turned to increased debt and increased payout ratios in order to meet their lofty dividend per share growth targets.  They hoped that share prices would accelerate again while their payout ratios were still below 100% and banks were still willing to finance their debt.

But the writing was on the wall… Yieldco share price growth can continue indefinitely as long as investors believe it will. But, like Tinkerbell, the Yieldco bubble popped as soon as investors stopped believing in it.  The virtuous cycle turned viscous.

By the end of 2015, many Yeildcos had fallen enough that their stocks were attractive even without assuming any dividend per share growth.  That’s not where we are now.  Although valuations feel very lofty, the past few years of fiscal discipline has led to lower payout ratios and reduced debt burdens.  Combine these with current high share prices, and conditions are right to kick off a new Yieldco virtuous cycle and boom.

Most Yieldcos’ share prices have increased rapidly in the second half of 2020.  This sets the stage for a new Yieldco boom, with a new virtuous cycle of rising share prices, expectations of dividend per share growth, and new investments beginning to take off.  Given the momentum of the divestment movement, a new Yieldco boom seems likely.  If a new boom is going to happen, the best Yeildcos to buy today will be the ones with the lowest current dividend yields, because they can raise the cheapest capital in new secondary offerings and they will be able to promise the fastest dividend per share growth.

While a new Yieldco boom is likely, it is not certain.  The most likely event to derail the Yieldco growth train would be a US market crash.  Given the current high valuations and the worsening pandemic, a crash is impossible to rule out.   If this happens, the best Yieldcos to own today are the ones that have the highest yields and/or are retaining the most cash to invest in new projects and pay down debt.  These cheaper Yieldcos will also do well if a new Yieldco boom materializes, but not as well as the leaders.

Since I’m more interested in avoiding losses than going for the big win, the Yieldcos in the 10 Clean Energy Stocks for 2021 model portfolio are: Covanta Holding (CVA), Green Plains Partners (GPP), Avangrid (AGR), and Brookfield Renewable Energy Partners (BEP).  Covanta, Green Plains Partners, and Avangrid did not appreciate as much as other Yeildcos in the past six months because they are not the pure solar and wind power owners that many investors will be looking to as a replacement for fossil fuel stocks.  Covanta is a leader in Energy from Waste, Green Plains Partners is a Master Limited Partnership (MLP) that owns ethanol storage and transportation assets.

Avangrid (AGR) is not completely fossil fuel free, since it owns some natural gas utilities, which is why it has not run up with the purely renewable Yieldcos.  Nevertheless, it is a leader among electricity generators in the US, with its CO2 emissions per kWh in 2018 at 15% of the US average.  Its utility networks are 77% electric and 23% gas.

That picture is being made somewhat worse by its planned purchase of PNM Resources.  After the PNM merger, its electricity generation also includes 22% to 32% fossil fuel (depending on if you measure by electricity capacity or production – see chart), but planned generation investments will be almost entirely renewable, while it phases out coal.  While Avangrid’s valuation remains low compared to its more renewables-focused peers, it could benefit if a Yieldco investment boom materializes.  Its existing and new renewable generation assets will become more valuable as the increased demand by Yieldcos drives up prices. 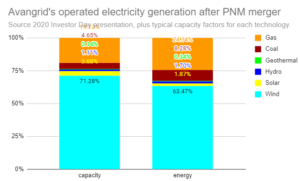 It could also take advantage of the boom by selling its fossil fuel assets and becoming a truly fossil fuel free company, although management seems committed to its natural gas utilities, at least for the moment.

Finally, Brookfield Renewable Energy Partners (BEP) is a pure clean energy Yieldco which has seen massive price appreciation over the last six months, and trades at low (2.7%) yield.  But compared to other highly priced Yieldcos, BEP has an advantage for raising money in secondary offerings.  It has a second type of share in Brookfield Renewable Energy Corporation (BEPC), which is even more highly valued than BEP.  While BEP and BEPC pay the same per-share dividend, BEPC shares ended 2020 at $58.27, a 35% premium compared to BEP which closed at $43.15.  With this price differential, Brookfield Renewable can issue new BEPC shares and use the funds to invest in clean energy projects which will benefit both share classes equally.  Alternatively, the company could sell ten million BEPC shares, buy ten million BEP units, and instantly have an extra $150 million to invest without increasing the total number of shares outstanding.  For this reason, I expect the company to issue many new BEPC shares in 2020, with the benefit accruing to both classes of share equally.  Over time, this will erode the large premium of BEPC shares over BEP units.

The safest way to bet that the premium of BEPC over BEP will narrow would be a long-short hedge, buying BEP and selling an equal dollar amount of BEPC short.  For every 100 shares of BEP purchased (for $4315), the investor would also sell $4315/$58.27 = 74 shares of BEPC short.  This long-short hedge would only change in value if the price premium changed, but the investor would collect approximately $116 in dividend on BEP, while only paying $86 in dividends on the short BEPC shares.  Meanwhile, each 10% decrease in the premium would lead to a 10% ($431) gain, while each 10% increase in the premium would lead to a 10% loss.

Unfortunately, there are many hedge funds that follow absolute return strategies like the one I have outlined above, and their demand for BEPC shares to sell short will lead to additional fees for anyone trying to sell BEPC short.

Another option for a partial hedge for BEP shares using BEPC would be to sell call options on BEPC.  For this, I would use the longest-dated call options available with a strike price just above the current market price.  In this case, that is the call option to buy 100 shares of BEPC at $60 at any time before June 18, 2021, or BEPC 6/18/21 $60 Call.  Selling one such contract would be a hedge against small declines of 135 shares of BEP.  While I was initially thinking I would include a hedge like this in the model portfolio, the requirement that the BEP position to be at least 135 shares (or $5800) to work means that in order to follow the model portfolio, a reader would have to invest at least $5800 in each of the 10 stocks, or $58,000 total.  Since I want this strategy to be accessible to readers with only $10,000 or so to invest, I will include BEP in the portfolio without a hedge.

The end of 2020 looks like it may have set the stage for a new Yieldco boom, with rapidly rising stock prices leading to new investment and rapid dividend per share growth.  If this virtuous cycle emerges, the Yieldcos to own will be the ones with the lowest yields and the highest potential for compound dividend growth.

Unfortunately, a Yeildco boom is not certain.  Higher yield Yieldcos will also benefit from a boom as investors attracted by the leaders look for diversification in the space, but they offer more safety.  If a new Yieldco boom fails to emerge or turns to a bust, more value priced Yieldcos like CVA, GPP, and AGR have less far to fall.

Brookfield Renewable Energy Partners (BEP) is one of the Yieldcos that saw the largest rise (69%) in the second half of 2020. It has the advantage over other Yieldcos that it can raise cash through the sale of shares of the even more highly valued Brookfield Renewable Energy Corp. (BEPC) shares, which are up 126% over six months and now trade at a 35% premium to BEP.  BEP shares can not only benefit from a renewed Yieldco boom, but can also benefit from any narrowing of the BEPC/BEP share price premium, which I believe is too large to be sustainable.