Research firm Corporate Knights revealed that the pension fund would be $22 billion richer had it divested from fossil fuel stocks in 2008. That’s almost $20,000 for of each of the pension fund’s 1.1 million members & retirees.

These shocking numbers come on the heels of recent WNYC which revealed that the top pension official, Chief Investment Officer Vicki Fuller, took a $275,000+ job with the Williams (NYSE:WMB) pipeline company just one day after she quit working for the state. She did this after advocating against divestment by the state pension fund for years and while doubling the fund’s investments in the Williams pipeline company to $160 million. Williams is trying to get two fracked gas pipelines built in New York State. More than 30 organizations have asked the New York State Ethics watchdog to investigate this conflict of interest.

It’s abundantly clear we need to get fossil fuels out of politics in New York and also out of the state pension fund.

By refusing to divest from fossil fuels, the New York state comptroller Thomas DiNapoli, who has ultimate authority over the pension fund, has chosen to be on the wrong side of history, and it’s costing New Yorkers billions in foregone profits. The money the state could have earned by divesting a decade ago would have covered more than 25 percent of the costs from 2012’s climate change fueled Superstorm Sandy.

Fossil fuel companies are driving the climate crisis. And investing public funds in them is not only morally wrong, it doesn’t make financial sense. For years, experts have been ringing the alarm bell on the growing financial risks of coal, oil and gas companies. 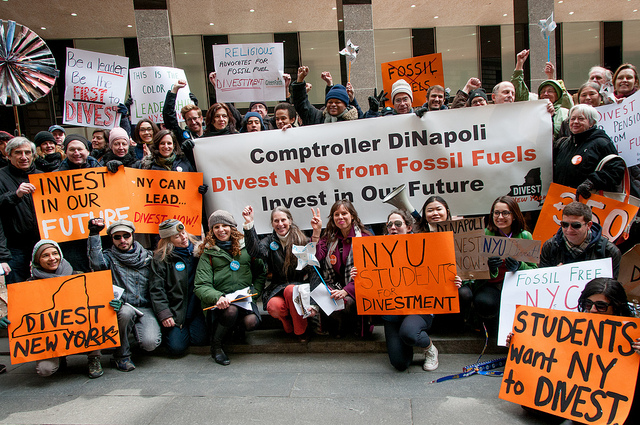 While Comptroller DiNapoli has chosen to spend his time ‘talking’ to fossil fuel companies like Exxon, other jurisdictions, recognizing the risks and their fiduciary duties, are moving forward with real climate actions like divesting. New York City, for example, announced in January, its commitment to divest its $200 billion pension funds from fossil fuels and more recently promised to invest $4 billion in climate solutions like renewables. That’s real, financially sound, climate action and much better than talking to and investing in Big Oil companies.

If New York City can do it, New York State can too.

As we face down the next storm and as sea levels rise, our state needs to do more to protect the futures of New Yorkers. It’s important that the state take action on climate at all levels, including getting fossil fuels out of the state pension fund.

This article was first published on the Fossil Free NY Blog.