On 10/17/18, a groundbreaking event was held for a community solar installation being developed by SunCommon, partnering with Orange County Citizens Foundation, to supply a group of 60 homes and a community center located in the hillsides of an exurb called Sugar Loaf near Chester, NY.

The staff and community members were ebullient, as the project, coming to the end of 2-year development process, begins the final stage of erecting the racks and panels, and installing the interconnection, which will be completed in the next 30 days. It is the first project for SunCommon, a firm with a large footprint in Vermont, to be installed in the Hudson Valley since its recent merger with Hudson Solar located in Rhinebeck, which on its own had completed one prior community solar project.

Community solar project structures are proliferating, because they offer access to renewable energy sourced remotely for homeowners who are unable to install panels on their roof or ground-mounted on their property due to either insufficient insolation or upfront funding.  The structure is different than an Energy Service Co (ESCO), which also provides energy from remotely located renewable sources, but ESCOs have had a history of problematic transparency and overcharging, which often cancels out any potential cost benefits to the customer.

Community solar is generically a form of “Virtual Net Metering”, which credits the subscriber a prorata share of the actual energy generated by the distributed generating facility, which is shown on the utility invoice as a credit offsetting the utility bill.  If offered as a subscription, (which can be highly varied), the value of the energy credited to company from the utility, plus tax credits, RECs, & depreciation, netted against the long term liabilities, allows the company to compute a discount in payments from the customers that can still yield a profit. The customer sees a payment to the Community Solar company typically at a simple 10% reduction from the customer’s baseline electric bill. 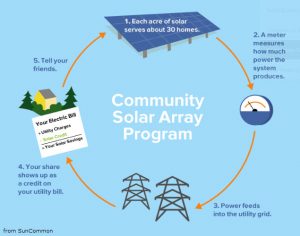 SunCommon uses an alternative purchase model, in which customers buy an allocation of the hardware and infrastructure, calculated to provide sufficient energy for the customer’s specific load requirements.  In that case, the calculations to show costs benefits is more complicated, involving tax deductions that vary with the customer’s individual financial situation.  These savings often result in greater than 10% average annual savings.  Although it may not be possible to predict savings with absolute precision, one can safely assume that electricity costs will be rising, possibly more steeply than currently anticipated, which would result in more savings than conservatively presented by marketing staff.

The SunCommon project is sized for what they regard their “sweet spot”, about 380kW in a mid-size range between 150kW – 750kW, a.  They intentionally avoid projects scaled to the maximum 2MW sizing allowable under current rules for community solar, because of additional complexity.  Even a routine sized project like this requires a long series of steps to obtain permitting approvals.

Jeff Irish, SunCommon’s VP & General Manager, made a point of noting in his comments that the firm had been organized as a “B Corp”, meaning a Public Benefit Corporation a voluntary certification of commitment to a “stakeholder model” of corporate governance, which places the concerns of workers, community and customers, as well as environmental considerations on equal footing with shareholder profit.  An epoch-making federal statute with similar provisions was recently proposed to restructure corporate governance under Elizabeth Warren’s Accountable Capitalism bill.

The incentives have incrementally stepped down, with the earliest investments being given the most support to kick start the market, with as much as $1/MW, and less being offered to later entrants, now down to $.30/MW. 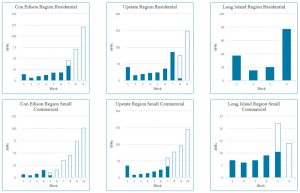 There are 3 regions, and 3 sectors.  As shown, there are quota blocks, which are filling up in each region and sector, in this graphic prepared by NYSERDA (data as of 11/21/17).

The mid-Hudson region is the most active in development of solar projects, with Orange County leading the entire state in Community Distributed Generation (CDG). 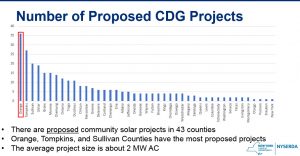 However, not all proposed projects are completed and become operational.  But if the goals of the REV & RPS targets are to be reached, it would be incumbent upon the state to support net metering pricing

sufficiently to incentivize private sector development, and to increase the MW block quota caps.   However, it seems that currently, despite the positive commitments set forth in the REV goals, some of the implementing policies seem either not strong enough or actively adverse to those goals.

The prime example of this is the State Public Service Commission determination to side with the utilities in its restructured net metering rules, dubbed “Value of Distributed Energy Resources”.  The utilities favor VDER, having chafed under net metering, but it appears to be quashing development momentum,  because these new pricing standards are not only more complex, but they result in lower net payments from utilities to distributed generators.  The PSC has effectively accepted the argument from the utilities that net metering provides owners of renewable assets with excessive benefits to the detriment of all the other ratepayers, despite evidence for benefits renewables provide to the utilities for enhanced grid flexibility, and avoidance of capital investment in new base load generation.

Could faster adoption of renewables, stimulated by higher net metering compensation and higher MW Block quotas, have made it possible to avoid an installation of the CPV gas power plant in Waywanda?  The question of whether replacement power for closure of Indian Point nuclear plant could have come entirely from renewables and energy efficiency, and avoided building the CPV gas plant, clearly a very  complex question, was addressed in a report prepared by Synapse Energy Economics for Riverkeeper and Natural Resources Defense Council, and analyzed here by a reasonably non-partisan expert.

Clearly, VDER has made Community solar development more uneconomic, so it’s fortuitous that SunCommon has reached its goal in this project, to provide more customers an opportunity to participate in the transition to a low carbon economy, and add data points to the advocacy battle against regressive fossil fuel infrastructure.