Clean Energy Fuels (NASDAQ: CLNE) has been having a pretty good year. 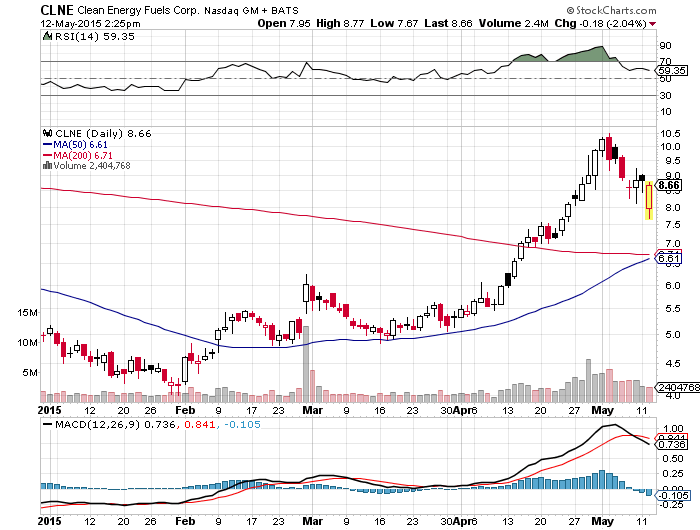 But the natural gas fueling company co-founded by legendary oilman T. Boone Pickens took it on the chin today after missing analysts’ estimates for earnings and revenue in Q1.

When CLNE first came on the scene, I was a fan. I even recommended the company shortly after it went public. And we did pretty well, eventually clocking out with a gain in excess of 60 percent in less than a year.

Since then, I’ve commented here and there on the stock, but never bothered to get back in. Although I could’ve made a nice chunk of change this year on it, I remain skeptical about the big promises that often come from the “natural gas for fuel” camp.

I have no doubt that natural gas will continue to be a fuel of choice for a number of fleet operators – particularly those relying on buses and large trucks. However, there are still those who claim that natural gas can serve as the perfect bridge fuel for passenger vehicles – transitioning us from gas and diesel to natural gas, then ultimately to electric cars or fuel cells. The latter also being an unlikely occurrence.

In any event, this is an argument I’ve been hearing for years. The only problem is, such a bridge is unnecessary. We’re well on our way to transitioning away from the outdated internal combustion engine.

Yes, we’re still decades away from meaningful numbers, but certainly no natural gas bridge is required. And quite frankly, the only folks that keep harping on this illusion are those with a lot of skin in the natural gas game.

Don’t get me wrong. I’m not trying to knock their hustle. We’re all out here trying to make a buck. But I would remind investors that while Clean Energy Fuels will continue to be quite successful landing deals with fleets, any claims from the peddlers of this camp that natural-gas powered passenger vehicles are coming should be met with an enormous amount of skepticism.

Getting back to Clean Energy Fuels, I know a lot of analysts still have pretty high price targets on this thing. But I’m skeptical. Here are a few things that bother me about CLNE:

It’s carrying nearly $600 million in debt, yet only has about $215 million in cash
Analysts at Piper Jaffray have suggest that the company will not have enough cash to pay off its convertible debt in 2016. I don’t know how accurate this analysis is, but it does have a $145 million convertible note coming due in August
With lower oil prices, interest in liquid natural gas is waning. Some companies, including Cummins Westport have put their LNG engine manufacturing operations on hold.

I just don’t think Clean Energy Fuels is ever going to be able to live up to the grand expectations its been pitching over the years. That’s not to say the company’s going to go belly up. But I wouldn’t be surprised to see management looking to do a capital raise sometime soon, possibly resulting in dilution of the stock.

All in all, I don’t like the prospects for CLNE. It might be good for a quick trade here and there, but long-term this one just isn’t for me.