The Week in Cleantech is a weekly roundup of our favorite cleantech and alt energy blog posts and stories from across the web. If you know of a good piece that you think should be included here, don’t hesitate to let us know! This week, we particularly liked… On Monday, the Intergovernmental Panel On Climate Change issued its Fourth Assessment Report (AR4). Here’s an overview by the Green Car Congress. On Tuesday, Himanshu Pandya at Financial Nirvana informed us that certain Chinese solar companies believe that the silicon shortage is easing up. He shorted MEMC electronics [NYSE:WFR] because the shortage may be ending. On Tuesday, Emily Singer at Technology Review told us how a company was working to make biofuels better. Five years from now, the biofuels industry will be very different from today’s. On Tuesday, James Fraser at the Energy Blog reported on “the world’s first commercial solar tower power plant.” Pretty impressive! On Tuesday, Jack Brynaur at Quite Contrarian gave us a few options for profiting from blue gold. Water is a very interesting sector to watch and one which has largely fallen below the investor radar so far. Thanks to Seeking Alpha for this one. On Wednesday, James Fraser at the Energy Blog told us about Vinod Khosla’s venture investments. Always interesting to know what Khosla is up to. On Wednesday, Tom Whipple at The Energy Bulletin reported on the Government Accountability Office’s study on peak oil. In the article’s words: “[t]his report is clearly a milestone on our journey through the oil age for it is the first time the staff of a major government agency has looked at the issue and concluded that peak oil is real” On Wednesday, Mike Millikin at the Green Car Congress told us about a study on the outlook for biofuels in the Americas through 2020. Greater involvement in the biofuels business Latin American players is a near certainty, and essential if the US is to meet its aggressive targets. On Thursday, Worth Civils at WSJ’s Energy Roundup reported on a recent study on peak coal. That’s right, not peak oil – peak coal. 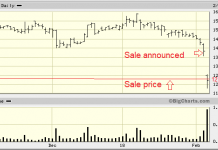