Fuel cell technology is vital to building the hydrogen economy. Fuel cells combine hydrogen and oxygen into water, while generating a current and some heat energy. Thus, they are used to retrieve stored energy from hydrogen as electricity in large-scale stationary applications, and convert hydrogen fuel to power in automobiles.

This article introduces a series on fuel cell technologies which will explore the various technologies, the efforts and challenges to improving them, and their prospects for wide-spread adoption.

There are a range of fuel cell technologies. The two most prominent are alkaline fuel cells (ALKFC) and proton exchange membrane fuel cells (PEMFC).

ALKFCs were the earliest fuel cells, and have been used for several applications, from off-grid power for mining operations to spacecraft at NASA. They comprise two electrodes that contain catalysts, immersed in a liquid electrolyte (usually potassium hydroxide). Hydrogen and oxygen are supplied to either of the electrodes, and the catalyst causes the hydrogen to split into hydrogen ions (also called protons) and electrons. The ions transfer to the other electrode via the electrolyte, and combine with oxygen to form water. The electrons are made to transfer between the electrodes through an external pathway, thus generating a current.

PEMFCs do not utilize an electrolyte. They are composed of two platinum layers, separated by a thin membrane. The platinum layers are catalysts, which are in turn surrounded by gas diffusion layers (GDL) and bipolar plates. Hydrogen and oxygen are supplied to the bipolar plates, and transfer through the GDL to the platinum catalysts. Similar to ALKFCs, hydrogen splits into ions (protons) and electrons. The protons permeate through the membrane and combine with oxygen to form water, while the electrons are collected by the bipolar plate and made to generate a current. Individual PEM cells are too small to satiate most power requirements, and are bundled into larger units called “stacks”.

One notable difference between the two cells is that PEMFCs are far more compact than ALKFCs, due to the absence of a liquid electrolyte and their layered, plate structure. So, they are preferred for use in automobiles, which have limited space. However, research continues into the production of newer kinds of ALKFCs that could bridge this gap. For instance, metal hydride fuel cells are capable of storing hydrogen fuel as part of the system, making them more space-efficient.

The next two articles in this series will focus on the costs and other characteristics of PEMFCs and ALKFCs. 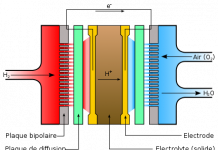