I don’t mean to sound so dramatic, but there’s no other way to put it.

You see, that night, Tesla Motors (NASDAQ: TSLA)) CEO and super-genius Elon Musk unveiled something so monumentally game-changing, it’s almost hard to put into words without sounding like a lunatic. But I’m going to try anyway…

Out of the Starting Gate

However, in the early 2000s, the once-niche industry that had long been suitable only to overzealous tree-huggers and wealthy eccentrics had finally inched out of the starting gate. And I wasted no time in capitalizing on the clean energy boom I knew was coming.

Over the years, we did quite well. In fact, after the effects of the recession subsided, the renewable energy industry has enjoyed some pretty impressive and consistent growth. And today, things like solar, wind, and electric cars have really become ubiquitous.

That being said, there’s always been a hurdle for renewable energy technologies…

No matter how rapidly the technology develops and the costs of integration fall, when the sun doesn’t shine and the wind doesn’t blow, solar and wind are of little use.

Of course, there have also been plenty of arguments to support the idea of an energy economy heavily weighted in renewables, where only a small percentage of fossil fuel generation would be necessary. By utilizing intelligent energy systems, smart grids, and all kinds of wonderful technologies, this is doable.

But there’s an easier way.

Energy independence is a dream for many but a reality for just a few.

The truth is, energy independence has long been little more than theory because of the high costs of achieving such a thing at least in the face of a heavily subsidized, centralized energy system that seems to reward complacency while penalizing innovation.

But thanks to Elon Musk, that’s about to change.

Tesla’s Powerwall is a home battery that can be charged using electricity generated from solar panels on your roof. At night, after the sun goes down, you can use this battery to power your home. Or, if some of your electricity still comes from the grid, you can simply use it as a backup system against power outages.

Basically, what we’re talking about here is the fact that most of us now have the opportunity to turn our homes into small power plants and fueling stations. That’s right, fueling stations, too because if you own an electric car, you’ll now be able to fuel your car with domestically generated electrons in your own home.

This is not a lofty goal  this is reality.

Of course, with Musk allowing this technology to be open-sourced, Tesla won’t be the only game in town. And the way Musk sees it, this is a good thing, as it’ll spark competition and enable a faster transition of our energy economy.

One company that’s actually looking to offer its own similar battery system is Sungevity.

Sungevity is one of the biggest solar financing and installation companies in the U.S. Not quite as big as SolarCity (NASDAQ: SCTY), but still a major player.

Last month, we learned that Sungevity had teamed up with German battery manufacturer Sonnenbatterie to supply storage systems to homeowners, too. However, the initial pricing we see on this is around $10,000, and these systems will mostly be marketed in Europe.

Of course, moving beyond Tesla (and SolarCity, which is run by Elon Musk’s cousin and of which Musk is chairman), this will provide yet one more boost for the solar industry in general.

One of the reasons some folks have held back on going solar is because of the concern over solar being an intermittent power source. But with a competitively priced, reliable battery backup, this is no longer a concern. Every major solar manufacturer on the planet will benefit from this development.

Now, the rollout of these new batteries won’t happen for another three or four months. And that rollout will be relatively slow until 2017, when more batteries will be pumped out of Tesla’s new Gigafactory which, by the way, will enjoy production levels in 2020 that will exceed all of 2013’s global production. 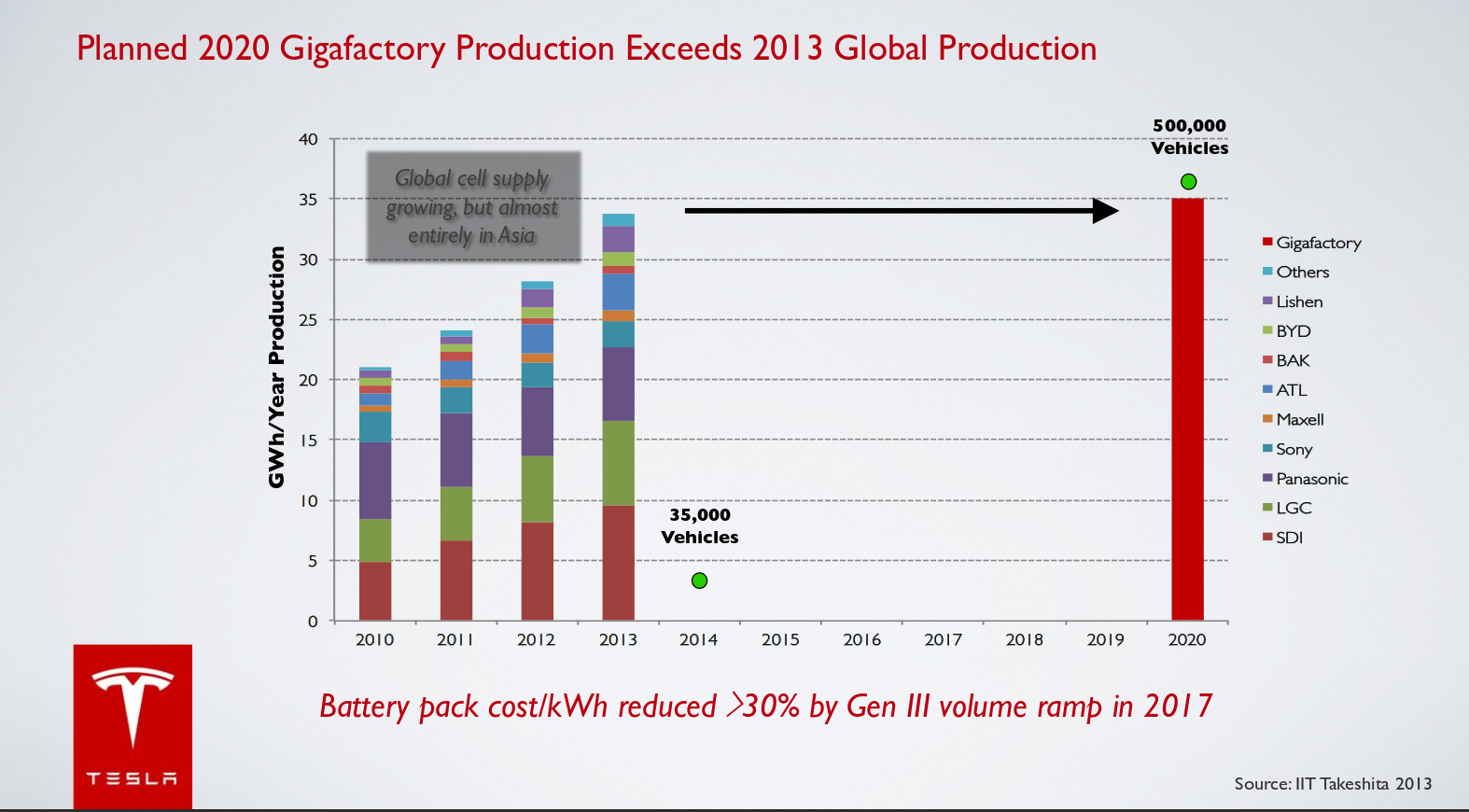 As I’ve been preaching for years, we are at the dawn of a massive transition of our energy economy.

Going forward, it will be supported by new energy technologies that will be much more efficient and reliable than what we rely on today. As well, these technologies will allow us to enjoy all the conveniences and comforts we enjoy today  but do so without fouling up the planet. Not a bad deal!