Albert Einstein once said, “If you can’t explain it simply, you don’t understand it well enough.” So when the editor of Batteries International asked if I could present my analysis of plug-in vehicles in two pages and prove my numbers in a way that any open-minded adult could follow, understand and verify with an Internet search engine, I jumped at the challenge. The article was published yesterday in their Winter Edition. Since the numbers have profound implications for the energy storage sector and an expected flurry of ill-conceived electric vehicle projects like the planned Tesla Motors IPO, I’ve decided to reprint the article here and then offer some thoughts and observations on what the numbers mean for prudent investors.

The first great fraud of the new millennium
(Reprinted from Batteries International, Winter 2010)

PT Barnum would have been proud.

While hype-masters loudly proclaim that plug in cars will save the planet by slashing oil consumption and CO2 emissions, the numbers tell a different story; that plug-ins are all sizzle and no steak. The result is the industrial equivalent of a snipe hunt, a wild goose chase based on flawed assumptions.

Let me explain how I reached this conclusion. On December 31, 2009 Forbes published an opinion piece titled System Overload that questioned whether the battery industry was overbuilding global manufacturing capacity. The third paragraph noted:

“By 2015 the new factories will have the global capacity to produce 36 million kilowatt-hours of battery capacity, enough to supply 15 million hybrid vehicles, or 1.5 million fully electric cars, says Deutsche Bank.”

While the article went on to question whether there would be buyers for all those batteries, the capacity estimate got me thinking: “In a world that wants to save fuel and reduce CO2 emissions, but can only make 36 million kWh of batteries per year, what is the highest and best use for the batteries?”

I hate unanswered questions. So I fired up my computer and went to work. Within a few minutes, I found myself wondering whether anybody in Brussels or Washington DC owns a calculator and understands grade school math.

In other words, plug-in vehicles are not the effective albeit expensive saviours of the planet that have been sold to credulous reporters and intellectually lazy regulators. They’re unconscionable waste masquerading as conservation. 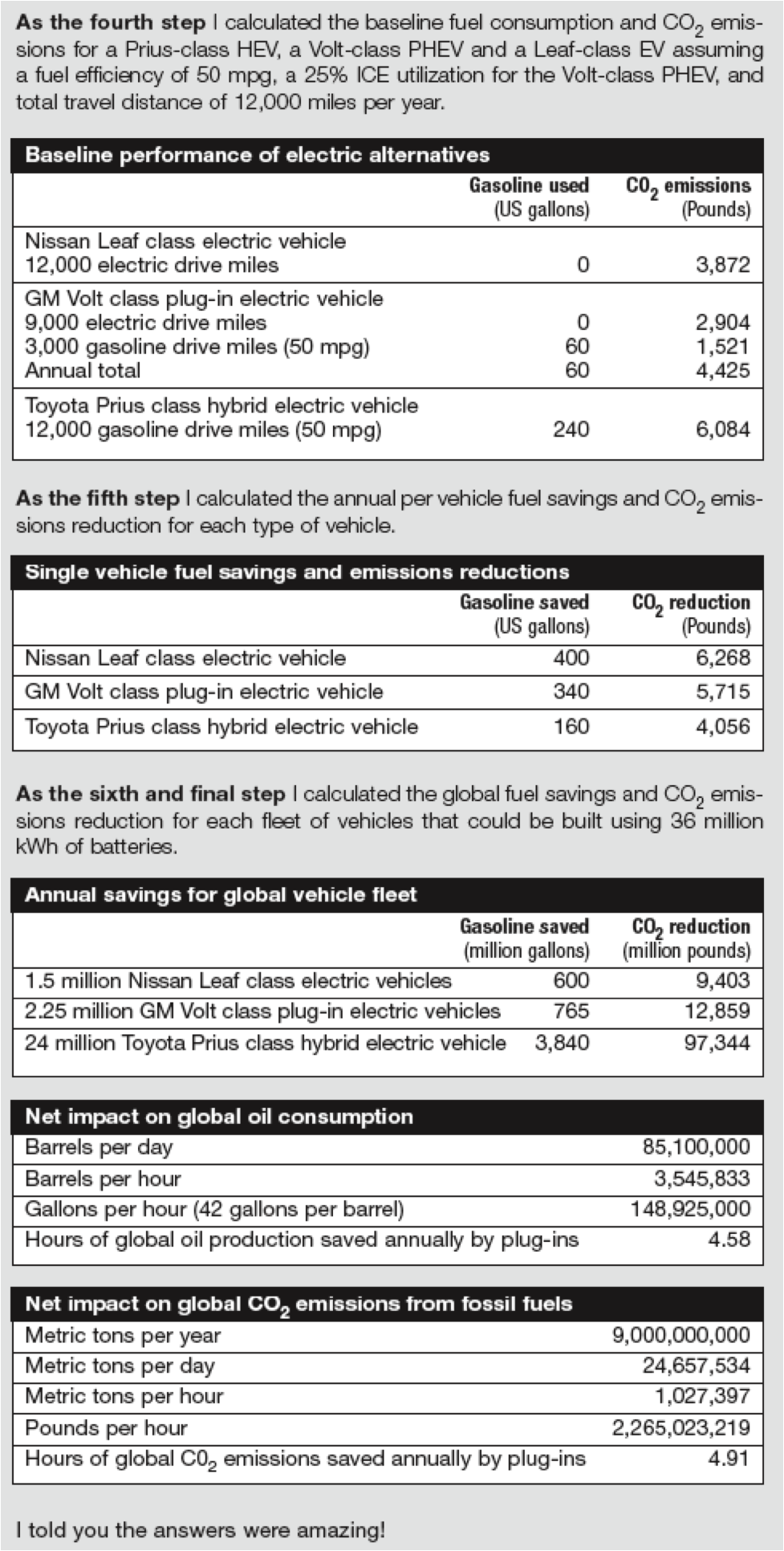 I’m agnostic when it comes to the relationship between CO2 emissions and global warming. I simply don’t know enough to have a firm conviction.

I’m not the least bit agnostic when it comes to the fact that six billion people on this planet want a small piece of the lifestyle that 500 million of us have and take for granted.

For all of recorded history, the poor toiled in ignorance and didn’t know that there was more to life than subsistence.

Thanks to information and communications technology, the cat’s out of the bag and fully half of the world’s poor know that there is something better. The biggest challenge of this century will be making room at the table for six billion new consumers.

Accomplishing that without horrific environmental consequences and catastrophic conflict requires relevant scale solutions to persistent shortages of water, food, energy and every commodity known to man.

Using 100% of the forecast global battery production capacity to make plug-in vehicles will save less than five hours of oil production and CO2 emissions per year. I can’t see how any thinking man would consider that scale sufficiently relevant to justify the plunder of far scarcer mineral resources.

In my opinion, the plug-in vehicle industry is perpetrating the first great fraud of the new millennium by using one-on-one vehicle comparisons instead of fleet comparisons.

Yes, indeed PT Barnum would have been proud.

The most fascinating aspect of this analysis is that battery chemistries and costs are irrelevant. The numbers don’t work any better if you use NiMH or even lead acid batteries instead of lithium-ion. They also don’t work any better if you slash battery costs and make really cheap plug-in vehicles. Those factors might change the cost-benefit analysis for an individual driver or a particular vehicle, but they wouldn’t change the cost-benefit analysis for the only planet we have. It is arrogant insanity to believe we can conserve a relatively plentiful natural resource like petroleum by plundering scarcer mineral resources like aluminum, copper, lead, rare earth metals and even lithium to make batteries for plug-ins.

The gaping flaw in the logic of EV evangelists is their insistence that all analysis stop at the fifth step; a point where plug-ins can look reasonable to a casual observer. In the real world, rational energy, economic, and industrial policies compel the sixth step comparison of fleet-wide performance, which is where the house of cards comes tumbling down. Over the next few years, global investments in advanced battery, plug-in vehicle and charging infrastructure schemes will be north of $20 billion. The best possible outcome will be a one or two percent reduction in global oil consumption by 2020.

That dog won’t hunt. We can and must do better.

My core philosophy comes from Benjamin Graham, the patron saint of value investors, who observed, “In the short run, the market acts like a voting machine, but in the long run it acts like a weighing machine.” While the numbers have convinced me that business models based on the plug-in dream are doomed because the concept is fundamentally flawed; I understand the hype cycle, recognize that markets can be irrational for extended periods of time and know that irrational markets can be alluring to opportunistic traders who are smart enough to enjoy popping corks and go home before the music stops.

For those who can’t resist the hype and glitz, my favorite for “Best in Show” honors is France’s SAFT Groupe (SGPEF.PK). While I don’t write about SAFT regularly because it isn’t registered with the SEC, it’s a fine company that was the second largest beneficiary of the ARRA battery manufacturing grants President Obama announced last August. Unlike the other ARRA grant recipients, SAFT walked away with a double dip from a $299.2 million award to its U.S. joint ventu
re with Johnson Controls (JCI) and a separate $95.5 million award to Saft America.

SAFT has a diversified revenue base from battery sales to military and industrial customers. As a result, SAFT earned €28.9 million on 2009 sales of €559.3 million and had €306.8 million in stockholders equity at year-end. Despite its solid track record, SAFT carries a relatively modest market capitalization of €730.5 million, which works out to 1.3 times trailing sales, 25.3 times trailing earnings and 1.3 times equity plus anticipated DOE grant funding.

For “Domestic Best in Breed,” my favorite is A123 Systems (AONE), which edged out SAFT for the top spot on the ARRA battery grant list at $249.1 million. A123 also plans to borrow up to $233 million under the DOE’s Advanced Technology Vehicle Manufacturing (ATVM) loan program.

In the wake of a successful IPO last September, A123 finished 2009 with $528.2 million in stockholders equity and a clean balance sheet, but it lost $85.8 million on sales of $91 million. A123’s market capitalization of $1.7 billion works out to 18.2 times trailing sales and 2.3 times equity plus anticipated DOE grant funding. While A123 doesn’t offer SAFT class value, it stands head and shoulders above other domestic lithium-ion battery developers, particularly in light of its ongoing efforts to hedge its plug-in vehicle bets with forays into the utility and industrial markets.

Ener1 (HEV) has always struck me as a company that could go either way, but was likely to disappoint investors who bought at inflated prices. Ener1 took fifth place on the ARRA battery grant list with a $118.5 million award. It also applied for loans under the ATVM program, but hasn’t completed due diligence. Since the ARRA battery grant requires matching funds equal to 100% of the grant amount and any ATVM loans will require matching funds equal to 25% of the loan amount, management recently cautioned that the company will need $150 million in additional equity before the dust settles.

Ener1 finished 2009 with a $3.7 million working capital deficit and $116.2 million in stockholders equity, but its balance sheet includes $13.2 million of intangible assets and a whopping $51 million of goodwill. Since both values strike me as incredibly speculative in the context of a company that lost $51 million on 2009 sales of $34.8 million, I believe potential investors will probably focus on Ener1’s net tangible book value of $51.9 million for analytical purposes.  Based on 30 years of experience with investors who were willing to invest in my clients but wore brass knuckles to pricing negotiations, my big concern is that Ener1 will have a tough time justifying a huge multiple of net tangible book value to large investors who know that its grants and loans can’t close without matching funds.

If it successfully completes it’s planned IPO, I’d put Tesla Motors a couple tiers below A123 because there isn’t a whole lot of  diversification potential for an electric vehicle manufacturer. There may be a couple years of splash and spectacle before the inevitable becomes obvious, but Tesla is not a stock that I’d buy and put in a drawer for my grandkids.

I believe plug in vehicles combine immense risk with insignificant reward, a potentially catastrophic dynamic. SAFT strikes me as a decent investment because its fundamentals are sound without considering any speculative upside from plug-in vehicles. If A123 can diversify into commercial and industrial markets, it may also be a long-term survivor. Until Ener1 solves it’s chicken or egg dilemma of not having the cash it needs to absorb future losses and close on its ARRA grant and ATVM loan, I’d be extremely cautious.

Disclosure: I plan to sit this one out.